Please note that i am suggesting 2 ninjas ^_^

1.Would you please put Hinata summer in Fireworks or Myoboku trial? she was supposed to be jun or jul sign in ninja don't remember exactly which one and was replaced with omoi swim suit then few months later we were given omoi swim suit again....then Kabuto halloween was repeated....wont mention Mei teirumi swim and Haku taisho at 3v3... or what's too bad was seeing Minato suit in the poll options to be given him for the 3rd time in a single year............It's fully understandable to have repetitions and that sooner or later we will have to get some repeated units but not in that way, there are many decent units who was given away for free previously like Hinata summer but was a long while ago (more that a year) not just 1-3 months...which would have been ok to be repeated cus definitely the number of new players who joined the game in a year definitely are more than who joined in a couple of months and want a repetition of a certain ninja......like it even wasn't jonin Minato in the poll options but was the worse suit version lol. Also she is never at events so we can't redeem her!!

2. would you please put Itachi anbu as well, thank you so much.

No offense, but please don't reply if you are gonna say this phrase or any equivalent;

Itachi anbut is OP/ me

and please don't say you can easily get him for free from 3v3, me and most of the people i know aren't anywhere close, been here for more than a year and barely got12 frags !!!!!!!!!!!! thank you for your understanding

2) In regards to Itachi Anbu,
He is certainly not a me

I mean if Rin can be a firework ninja, then Anbu Itachi definitely can too. I dont see a reason not to put Itachi in fireworks.

true, and i mentioned the being considered me

Greetings, will reply in points to be more clear

about your question because she was leaked (she was even mentioned here at forums in the official events thread) and was replaced (yes we know that all info are subject to change) with kakashi make out paradise as june sign in ninja...the may 28ths events cycle thread was deleted ?! (if i said sakura before...............sorry was a mistake)

....and i am sure of it cus my first fireworks in game was sakura christmas :(......there were many repetitions maam and i mentioned just 5, 6 by now....so ba

B)i fully understand we will have to get repeated ninjas sooner or later it's natural cus we don't get new ninjas fast enough not to need to repeat and as i said before at least repeat the farther ones 1st like hinata summer and anbu itachi (who been more than a whole year away) than repeating more than 5units who were given away in the same year and one of them is among the choices to be given away for the 3rd time.... then a year later very few who will complain about omo swim suit or so because the number of new players who joined the game during that year will be enough to contain these complaints but in 2 months not enough and the ones who are currently here won't be pleased.

C) it doesn't have to be fireworks or myoboku trial, sign in ninja would be fine if the other 2 aren't possible...but pls not 3v3 cus u never get the whole 80 frags...it's good just for 2* ninjas lol

thanks for your understanding ^_^

D) about collecting fragments, it takes much longer time to be implemented, been asking for old seasonals and all old non op at least, ninjas in general to be available for collection, and after few months we barely got seasonal optional pack 4 once a month in 1 event (naruto ramen)....... and ninjas are commonly repeated between fireworks and myoboku or sign in like sakura christmas, minato suit, kabuto and omoi swim......so why not repeat the older decent ones 1st if we are gonna repeat anyway...and i guess putting them at events for people to spend on won't be pleasant (like seasonal pack) especially that they were for free previously.............. also among other votes which was a repetition, yahiko young adult (3v3) etc.... thanks

E) by the count we got 6+ repetitions in around a year almost equivalent to 6months/12months around 50% so at least pls make them at least decent repetitions or who have been last given away a year or more thanks.

I agree with everything he said.

I'm waiting 1,5 years to finish gathering her fragments because once she was given in fireworks she disappeared from events entirely. Not only that, she wasn't put in collection either.

She was promised in a sign in and was replaced by a ninja that players could easily piece from collection.

You say you want to avoid repetition yet at the same time there were at least several ninjas who were repeated who were given away later than her.

Either bring older ninjas in events more (increase the poll of rewards given in events to include power items, old ninjas, new ninjas) or finally put old "freebies" that were given away in collection...

For example, you can give us already given ninja in mini-client in every month.

So It will be 3-4 free ninjas in month (Fireworks, daily sign-in and in mini-client and 3 vs 3 arena) And sometimes in Myoboku.

In Fireworks only not given ninja and in daily sign-in

I agree with the post and i don't see why this would be a problem. We have already received repeat ninjas this year it will be good to bring back older ones because some people may not have them. As far as itachi anbu he isn't op at all he's easily killed but hes balanced. Like the post said we have been more recently been given better ninjas like kurenai and kushina so this shouldn't really make many upset.

I am waiting for Taisho Mabui to show up in Myoboku.

won't be annoyed at all :P cus some people missed her and after a long enough while many new people would have joined who want her at least for collection.

I definitely already responded with several.

So before I continue, I'm definitely noting that none of you seem interested when I ask about putting the ninjas in events. You just want the ninjas for free. That seems to indicate to me that you aren't actually interested in collecting the ninjas, just in "free stuff." Point in case, nowhere in this statement do you mention collecting either ninja via fragments through events: "it doesn't have to be fireworks or myoboku trial, sign in ninja would be fine if the other 2 aren't possible...but pls not 3v3 cus u never get the whole 80 frags...it's good just for 2* ninjas lol"

Only in the edit do you address it, and you pretty much write the idea off. Fragments would allow you to collect both ninjas easily while still allowing other ninjas that haven't already been given the spotlight to be addressed. Again, my point here is, everyone's complaining about the repetitions of ninjas like Omoi. There will be *more* complains from people that aren't specifically you four if Summer Hinata and Anbu Itachi are repeated. I know this for a fact because I have had complaints about these two specific ninjas come up already. People don't want these two coming up again in Fireworks/Myoboku/whatever. They want new ninjas that haven't been given out for free.

....and i am sure of it cus my first fireworks in game was sakura christmas :(......there were many repetitions maam and i mentioned just 5, 6 by now....so ba

Again, my stance is that it's preferable that no ninjas be repeated.

> i fully understand we will have to get repeated ninjas sooner or later it's natural cus we don't get new ninjas fast enough not to need to repeat
This is not accurate at all.

As for this, this was probably more likely an error, a change, or a copy/paste error than a leak. I'm not privy to what went on with the events at the time, so I can't say for certain, but even so, it doesn't entitle us to her.

"She was promised in a sign in and was replaced by a ninja that players could easily piece from collection. "
It's worth pointing out that she wasn't "promised" at any point.

"You say you want to avoid repetition yet at the same time there were at least several ninjas who were repeated who were given away later than her."

It's also worth pointing out that I don't directly control ninja disbur*t. As I already said, I've already submitted the suggestion for these ninjas. Just as I've already submitted the suggestions for people that actively do not want these ninjas (there are far more of those). Keep in mind that these are just suggestions. Ultimately the higher ups determine whether these suggestions will go through. There is no guarantee that any submitted suggestion will go through. Also keep in mind that you're competing with the suggestions of other players, and that there are many more other players that do not want these two ninjas given out for free than that do, mainly because there are many more older, established players that already received the ninjas for free that do not need them and would not benefit from getting more fragments. For these players, getting a new ninja they haven't seen would be more beneficial. To them, getting Hinata or Itachi again would be like getting Omoi again for you.

You may not be, but many would be. As the original poster stated, he's annoyed to see repeated ninjas like Omoi and Suit Minato given out multiple times, and this is true for many players. Many players that successfully collect a ninja on the first try are annoyed to see their hard work and dedication to the game thrown away when an exclusive ninja is given out a second time. Ninjas lose exclusivity when this is done. Some people value that. Now I'm not agreeing or disagreeing with that. I'm simply explaining their view point.

Yes, I'm sure you'd be quite OK with three to four free ninjas per month.

You're also affecting those who already got him for free 3 years ago. If people really wanted him, he should be available in treasure of the sages. If you put it there, you don't give up any other ninjas that can be potential given for free or not in a redeemable prize that fits in the current me

Also, the only people who said he was me

1. She was. She was described in events with an adnotation that all information are final and correct but when the month came it was Paradise Kakashi.

2. I know that you don't have any power whatsoever. Just pointing out your logic doesn't hold water.

So those older, established players who would benefit more from a new ninja are fine with this. They are more happy with another repetition of a ninja that was for free several times before than with Summer Hinata who was only once and who they'd have a chance to 4 star. And that doesn't diminish Mizuki's exclusivity? 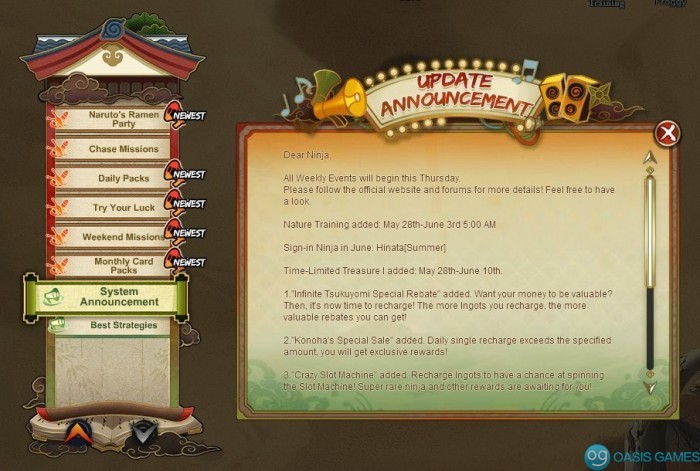 That's how it was presented.

You can't get more official than an information posted in game by a developer. I'd say this takes priority over any other source (be it from the mod or otherwise). But I guess not...

Point still stands that she wasn't ditched for a "new ninja established players can benefit from" but for a repeat of previously given away freebie.

And if Mizuki, Omoi Swimsuit, Christmas Sakura, Suit Minato etc. etc. can be given away multiple times proving that it's not about satisfying veteran players - I don't see any reason why Summer Hinata couldn't be as well.