Demalishor
On 2020-10-02 23:17:17 ｜ Show this Author Only ｜ Descending Order
1＃ Go To
Hi, this is an updated version of the tier list considering my personal preferences. Maybe not everyone will agree with it, but this is how I see it at the current time frame. So we start with the overall tier list table which is divided into ranks. In addition, BT (Breakthrough) is ofc also taken into account for every ninja.
God Tier= OP
Will briefly try to give my thoughts on the ninjas from rank God to S and some from A (that still are part of the me
The ninjas that are not included in the table are mostly not good or are good only at the start of your server and lose in value as the game goes on or are just pretty much very weak ninjas that most people do not use at all.
Note that not ALL ninjas sitting in the same TIER can be equally strong in comparison to each other, but in comparison to lower TIER Rank they are better. 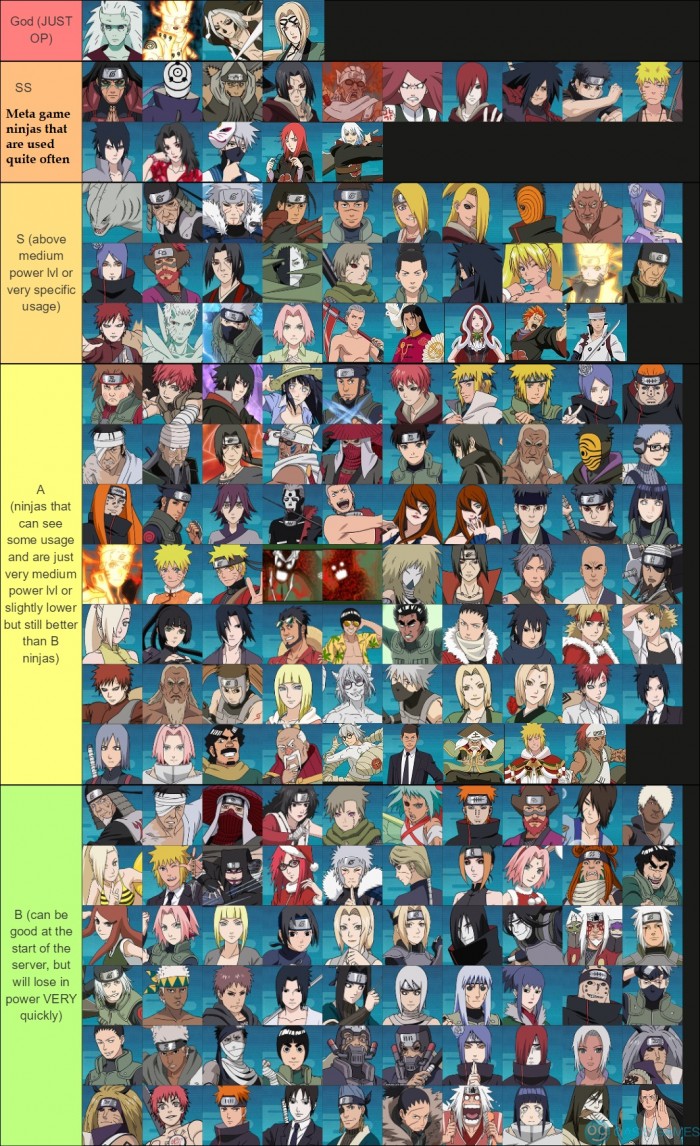 A more detailed look on different ranked ninjas + my personal opinion on them are available in this google doc.
Had to transfer it there, cause its more comfortable to work there + 1 post is limited in size.

You lost me when you put Ronnin Naruto in SS tier. but maybe a good list for newbies.

Overall I think this is a fair list, some of these ratings do confuse me a bit though. You don't think Rinnesasuke is SS, with BT (you said BT forms were considered)? I don't have him 4 stars yet, and admittedly in my experience his non-bt form is pretty bad in terms of damage output, but a lot of people seem to be saying he's pretty strong with BT, around or a little under Edo Minato's tier. His BT are still pretty new so I think we're still in the figuring things out phase in terms of where he will truly end up in the tier list.

I'm also interested to know why you put Ay [4th] and Han [Edo] in S tier. Ay is good in theory, but I hardly ever see him. I don't think I've ever seen him with BTs. Maybe once. I think this list should reflect not only theoretical potential but also usage if it's going to be helpful to people in picking which ninjas to use. Han is kind of similar, I never see anyone use him. Their mysteries are kind of similar, since it's just multiple standard attacks. The big problem with that (in my opinion) is that it's not targeted damage. You may or may not hit the ninja you want, it's too random.

One other thing, if you revised/did this again in the future, might be to split it into pos 1 carry ninjas and support ninjas. Some of these guys can be both but there are some in the high tiers who are pretty much only support (Edo Itachi, 7 Swords Bee, Iruka, Shark Kisame, Summer Sakura, etc.). Idk. I'm not sure if this would really help but otherwise it is kind of comparing apples to oranges, imo.

Thanks for making this though, always nice to see tier lists and I'm interested to see more discussion.

my shisui susano'o always died first. never think he get in the God Tier list

Thank you for all the comments with your thoughts! Also added a position 1 pvp tier set + support set as requested.
Will definitely consider updating the tier list in time, because I think that my mind might change, because some of the ninjas are pretty rare like Shisui Uchiha [Susano'o] and people are still experimenting and trying to find a place for him. For me at the moment he is still in God Tier, but that might definitely change for SS in time.
As for why I put Sasuke Rine with BT in S tier even tho most people say he should probably be an SS (S+) tier. However, in my opinion he is still not at that level. He is a very great ninja for support as I think, but mainly he has several downsides, because he does not do much dps even with BT. For me he is a very limited ninja that sorely exists to hard counter mainly Naruto Ronin only and Kakuzu teams (Kakuzu still won't be really a 100% win, but it depends on bp and teams) + he is not immune to debuffs, which makes him pretty ez to counter with control + his life is pretty low and he dies pretty fast from good dps. It was a hard choice, because I did consider putting him to SS tier, but changed my mind and put him in S for now. Maybe that will also change, but for now I don't think he is that strong to be able to carry due to the lack in protection from control, relatively low life and relatively low damage from mystery even with BT. He has a very nice skill set with BT, but for me its limited to counter specific teams only.

Kage Gaara is great, but mainly all he does is puts his barrier and stands afk after that. I don't consider that to be an SS tier in general. In support ofc, but mainly he does not do much on the battlefield other than putting his barrier out. He is very hard to kill, but nobody will target him either way. They will start killing your main/pos1 and you are left with Garaa, that only puts barrier and looks at you. Great, but not that great.

Pretty nice list, something that c*so be a factor is the current power of your team. I had the chance to use Shisui Susano'o at high power and he does destroy pretty well the ennemy. The scaling passives become more and more important the higher power you are. I can understand that someone who is lower people, let's say 200-300k and has a Shisui Susano'o might not do as good because he doesn't have the time to scale and the initial output isn't as strong.

And going the opposite way, going Naruto 6P when you are really high power is going down to the A tier as he has very low impact at this stage.

as a f2p player though, looking forward to hear more about s rank and below.

Tried restoring "do*ent" to its original form, but the li

Yeah had the same thing. Its pretty annoying with the censor + the google doc sometimes does not work properly. It worked for me from a different browser as microsoft suggested or by clearing cookie files.

I actually tested the li

Yo, get the hell out of here with your shady @ss malware li

Mods, can you ban this guy?

Susano'o Sasuke deserves more than being a simply A ranked ninja, especially when he deals a lot of damage on 2v2 and 3v3 battles.

Edo Hashirama deserves to be God Tier Overall, because despite not being a good carry, he is probably the 1b to Tsunade's 1a in terms of supporting, he basically fits everywhere and he has two of the best chases in the game.

You're also really underselling Rinne Sasuke as well, he not only can counter Ronin and Kakuzu, but Edo Minato and Edo Nagato (stops them from chasing because his Y standard applies a paralyze that goes through immunity/mirror) it also stops those who abuse KK Gaara or Earth Main for shields as Fear doesn't let anyone under it to have shields applied on them. Fear is basically one of the most overpowered debuffs in-game. Yes, his DPS might not be that great and he isn't immune so that makes him easier to counter, but that's why you run supports who can help him to achieve his job, even God Tier Ninjas like Minato and Sus Shisui need supports to help him chase

Thank you for all the opinions. Will definitely update the tier in a weeks time considering additionally the opinions that I heard.

Shisui susanoo is not god tier..maybe S.He looks cool and a little fun that's about it. Use kimimaro halloween pos 2 and hit him..he gets cooldown of 3 rounds rip..also ronin counters him.and ofc kushina and minato...and killer bee in a proper setup.

Updated the Tier List considering opinions (reconsidered some positions also) + added some detailed looks to the doсument. S tier soon to be added with detailed opinion.