Was playing in strong approaching and found a strange splash problem: when fighting both kinkaku and ginkaku, both cant take more of 1 damage per attack. Or when i hit the first enemy, the enemy target with the mystery only take 1 damage but the splash damage deal 47k.

When you know there unit now in game that can do mostly the same (hashi warring states), it's show a huge problem and mostly why the damage splash are bug: it's say the splash damage are 80% of the damage done on the main target (naruto 6path breaktrought) , or here the 1 damage is = to 47k??? It's not only ignore the damage done, but deal the damage that should be done to other target around.

So please, correct the algorithm behind splash damage and do so it's right calculate without ignoring other target defence and resistance or steal hp on target that take no damage. I'm using myself 6path and it's annoying how you can win by targeting weaker unit to deal more damage vs the most powerfull one of the enemy.

Repulse damage work mostly in the same way and it's not dealing has much damage.

Hello,
I can report this bug for you.
Do you by chance have a screenshot or a video showing this error?
Thanks!

there a difference with Kabuto Hallowen. It,s when the enemy trigger a mystery. Here I'm talking about that the mystery main target take 1 damage when the other target can take over 40k of damage. Or the splash damage from 6path mystery state that it's should be 80% of the first target of the mystery 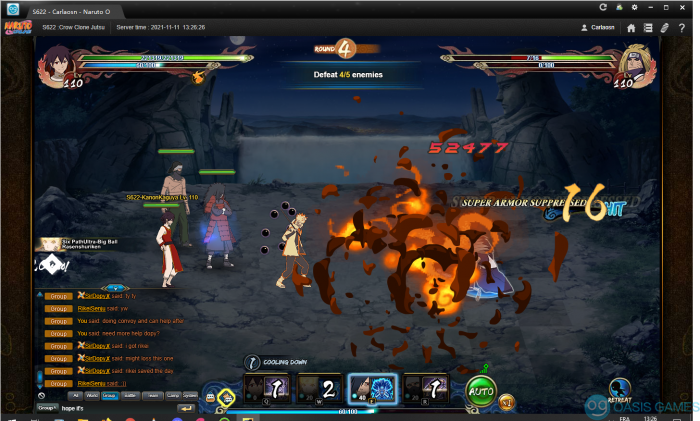 And here a screenshot. You can see there 52k of damage on gingaku when Kinkaku survive with 7hp on 16 for the enemy team. They should take only 1 damage for each attack. Or splash damage obviously bypass that. It's easy to think that not calculate proprely and the 80% of the splash dont care about def/res of any target or even the damage deal to the main target of the mystery. And it's a problem for unit like edo madara that can have a passif that should reduce any source of damage bu 30% or hashi warring states that get exactly the same power effect has those found in that strong approaching.

OK, perfect. I will report this for you and include your screenshot in the report. Thank you!