If not, you should be. Wish credits already updated for the new levels. Level 11 = 1250 gold refines (max) 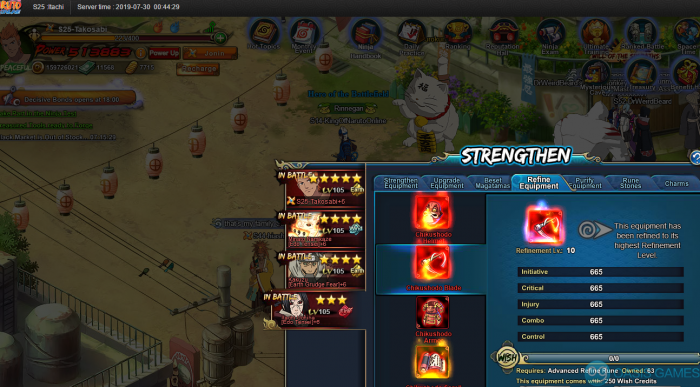 Edit: nvm i read it, but this doesn't necessarily mean we will get them.

Also level 106 stats for equipment are there stated.

That one has always been like that though. Even when we were at level 85, it always says you are at top level here is next. I don't ever remember seeing wish credits after level 10. Unless I've some how missed that for 3 years. Anyone have a screenshot from before with a timestamp that shows otherwise? Seeing as they were already trying to add it a while back, I assumed that meant the code was already in the game now. Just not unlocked.

That the feature is currently implemented in the game patch you can take it for granted.

But also tsunade npc and kage ti hard mode are.

Are them on sight?

The same is for all the currently missing skillbreaktroughs and trials that cn have implemented in game up to 3 months ago.

But doesn't seem to me haku or suigetsu are close to be released (and are implemented in game since 18 months).

Before 6.0 the screen garv showed didn't say at all what were the stats for level 106.

Ah I just got my first level 10 after 2 years... I just hope the red animation around it doesn't go away if lvl10+ refines were introduced.

i hope soo to

Gold is so outdated. Time for bitcoin.

How about lvl 20 bitcoin refines?