I need Help with Suigetsu Taka Squad Here are my ninjas:
I know they don't look f2p especially sasuke but i got them from rng events
i also have konan jiraya sage mode and kushina now 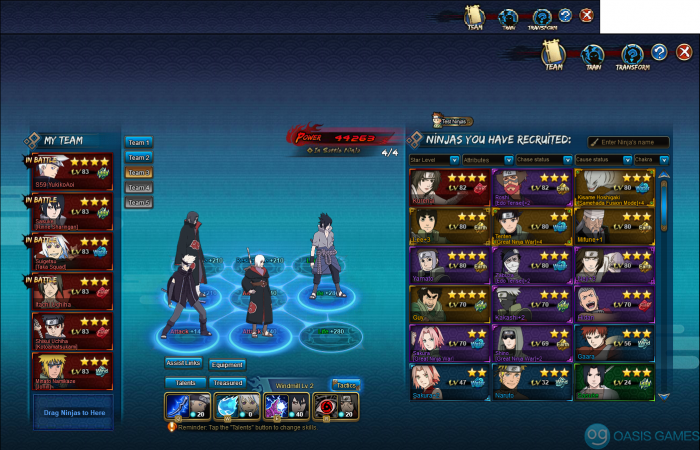 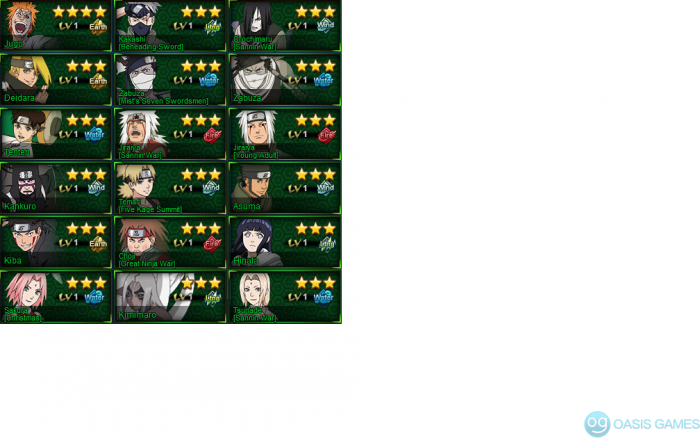 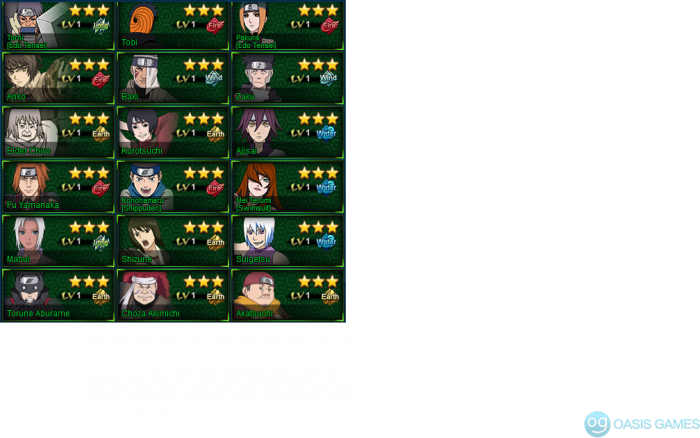 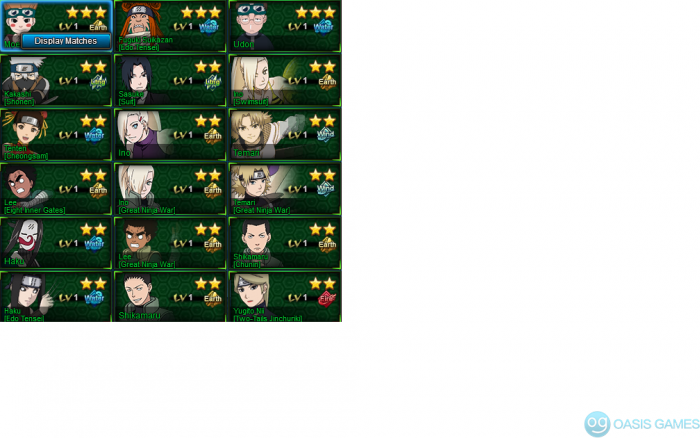 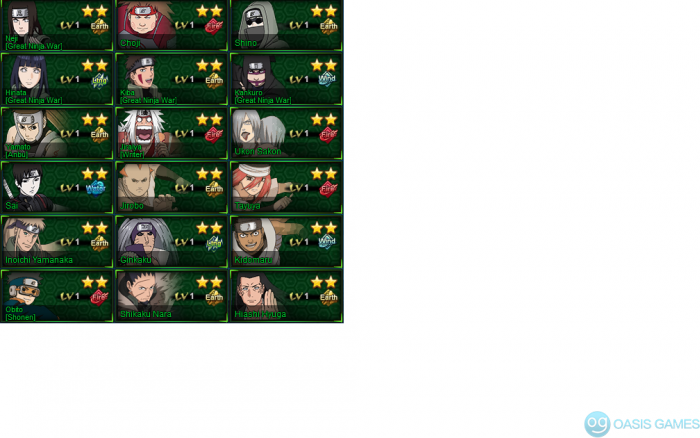 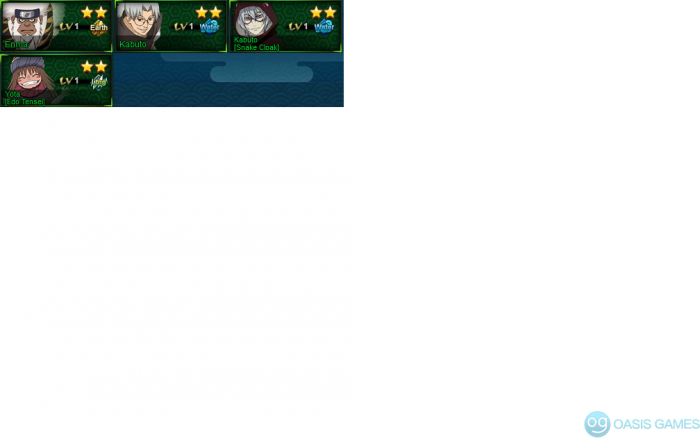 I think the lineup you have right now is the best for suigetsu. If you want you can trade itachi with shisui, but other than that I would just use that lineup and try and get sasuke four stars.

I disagree, there are better options available to you than the current team. I say this as someone who primarily uses a Rinnesasuke (with BT tho) team with Itachi so I know how these type of teams work.

I don't really see the benefit of Itachi in this current team. If you had Sasuke's BT, Itachi would be much more useful since you could use the 100 chakra barrier to spam Sasuke's mystery with 0 chakra cost every round and absorb 100 chakra every round to max out his passive scaling. But none of that works with non-BT Rinnesasuke. Itachi's barrier just gives chakra and increases his own chance to dodge, but it doesn't buff the whole lineup or anything. Plus you don't have him 4 star, so you can't have his BT. So his mystery will be non-prompt and easy to interrupt. In my opinion, he doesn't have a place on this team right now. Once you 4* him and Sasuke and get their BT, that's a different story.

I have 2 team recommendations for you. Proxy is being kinda glitchy today so I had to break this into multiple pics, sorry. 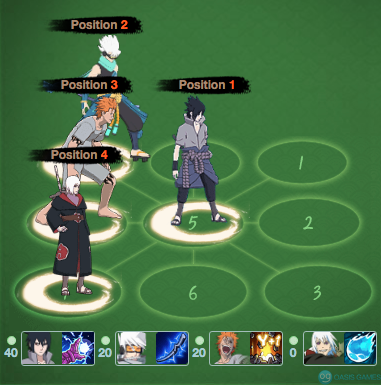 You c*e the Warrior's Killing Intent skill instead of ANBU tactics if you want. I'd personally go with ANBU tactics because even with the Warrior buff, non-BT Rinnesasuke's mystery damage is pretty low and doesn't often knock out other units, so the 0 cooldown doesn't trigger that often (in my experience). Also, since Jugo and Suigetsu give shields, this has the potential to be a team that can hold out for more than 2-3 rounds and you get even more survivability with the ANBU leech. But it's up to you, see what works better for you between the two.

First, I see you have Jugo 4* so you might have some of his BT. This is his optimal BT set up (imo) for this team:

But you probably don't have all of his BT right now. So, if you have his mystery BT at either Y or Y+1, his second passive (Curse Power) at +1, and his chase at +1, then you can make the best use this team. You could also use the Y second passive if that's all you have but it won't be as good. If you have his first passive (Bloodthirsty) at Y or Y+1 that's an added bonus. His standard attack isn't too important.

Basically, BT Jugo can buff Sasuke and Suigetsu, since they're curse mark units. He should also remove some debuffs with his mystery which is nice because you have no other debuff removal. Him plus Suigetsu is nice for shields since they both make them, and Sasuke will get both of their shields. It's also nice that his chase causes immobile, so in round 2 if you target a ninja you want to combo following Sasuke's mystery you can immobile them and prevent them from mysterying themselves.

You might also be wondering why I didn't put Suigetsu in pos 2 since his mystery can interrupt. Instead, Lightning Main is gonna be your pos 2 interrupt/acupuncture ninja. This is because the most important effect of Suigetsu's mystery isn't actually the interruption, it's the fact that it increases the target opponent's mystery cooldown by 1. So say you're facing someone who also has Pos 1 Rinnesasuke and their position 2 or 3 ninja is someone like Edo Itachi, Kakuzu, Masked Man, Shark Kisame etc, who can interrupt/chaos/immobile. You don't actually want to use Suigetsu on their pos2/3 ninja if it's a round 1 interrupt type, because then the added cooldown doesn't matter since they usually can't mystery in round 2 anyway. Instead (in my opinion) you'd want to use LM to Itachi/Kisame/Kakuzu/Masked Man and use Suigetsu to the opponent's Sasuke. That way he can't use his mystery in round 2.

This doesn't work as well if the opponent's pos 1 is someone like Edo Minato, Kushina, or SOSP who reduce their own cooldown. So in a case like that it might be worthwhile to target the opponent's pos 2/3/4 ninjas with both LM and Suigetsu. But you gotta learn to use and time their skills. If you really don't like how I've set it up tho you c*ways switch Suigetsu back to pos 2 and just adjust the chase/talents if necessary.

Here's option 2, in case you don't have the good BTs on Jugo. 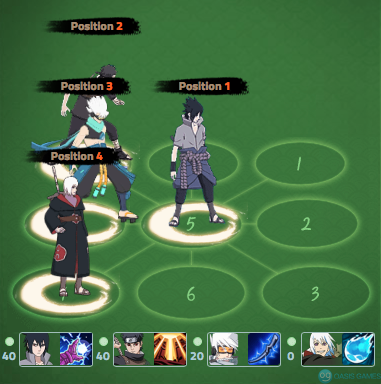 (Your chase summon doesn't 100% need to be the Rhino here, you could also use Giant Katsuyu or 8 Span Bird, the same chases get triggered, just in a slightly different order. I picked the Rhino because in that chase chain Shisui attacks sooner and applies tag, so the rest of the chases should do a little more damage. If you use the bird switch LM's chase to Lightning Sword. Also you c*ways use the "mini" version of each of these summons if you don't have the gold version.)

Again I'd recommend ANBU tactics over Warrior's Intent because the Warrior buff only applies to 3 sword users and all 4 ninjas in this team actually are swordsmen. So there's the possbility the buff might not get applied to Sasuke (who needs it most) and instead goes to the other 3. Root is the same but immunity is more valuable to all team members so it's ok that it only applies to 3.

More of a standard team here. Everyone buffs Sasuke. You wanna use LM and Suigetsu to try to stop other barrier ninja from overriding Shisui's barrier.

Thanks for taking the time to read this if you did, hope it helps.

Also I just thought of another thing you could test out. It's not as good as the other 2 teams I mentioned but it might be fun to try as blitz in arena or to use when you need to clear out a field of enemies in team instance or something. 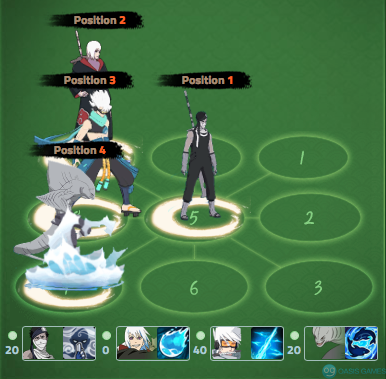 You could also use Demon Fox here. Or either of these two's "minis."

This requires some specifically timed set up in round 1. First interrupt anyone who would chaos/immobile/acupuncture you by using Suigetsu on them. Then use Edo Zabuza's mystery. Wait until LM does his mystery and gets 20 chakra and then use Kisame. You should be doing a lot of damage with standard attacks here: Edo Zabuza gets 2 extra, Suigetsu gets 2 extra, and Kisame gets his sharks to attack. Plus it's cool that everyone except LM can dodge and will get shields+buffs thanks to Suigetsu.

In round 2 it's a little harder since Edo Zabuza can't do anything yet. You have to wait out the opponent's attack and then use LM to hopefully finish them off.

Like I said not as good as the other teams but maybe fun to try.

you should work on getting edo nagato, he is 1300 moon scrolls per frag, you can get him from the exchange system. With his bt's you can give sasuke immunity, as long as he has a shield, and his mystery can not be dodged. But that team is fine, you dont have any better ninjas to replace itachi

I use Zetsu BT also with Sasuke Rinne BT and Suigetsu Taka. Even tho you don't have BT on Sasuke, you can try and BT Zetsu cause you can do that for free from collection. Fun team + usually I win stronger teams even.