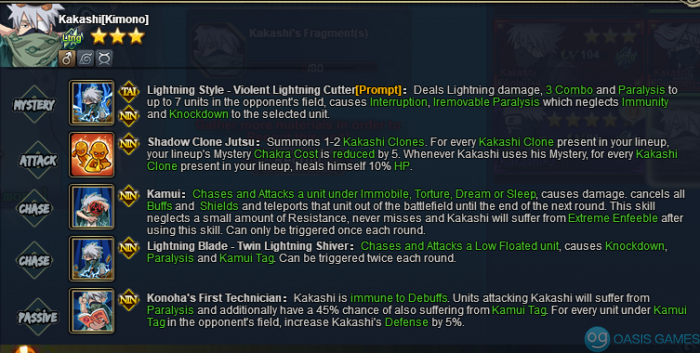 a) A huge buff, it used to be 40 chakra and 1 round battlefield cooldown, now 20 chakra and 0 rounds. There is the negative side of not being able to combo now which often happens with round 1 mysteries, but personally I think it's a good thing since you don't want to use this ninja as some main carry pos1 but rather as extra damage. This creates opportunities for some cool round 1 nuke teams

b) the censored part says "ally unit". Pretty cool to have this option, makes the ninjas more versatile with kinda 2 mysteries

c) Pretty cool with suppressing immunity + kamui tag + chakra recovery, making it even more usable in round 1 teams to gain more chakra. I don't like the random unit part but who knows it might turn out well

d) You can get 1 more clone now basically, heal a bit less per clone but that's not a big deal. The new addition is great for the team, a nice supporting passive reducing damage taken

e) Very good for a supporting/extra damage ninja, he doesn't have to be super strong with pos1 gear and he will still do that 5% hp damage to the enemy. A good buff

No bad change, everything was a pure buff here in my opinion

I personally love the round 1 mystery ninjas, so if you are like me these are some cool changes and make him more usable