Hello, i would like to suggest for either less damage control (since instead of calming the players it upsets them harder) or at least put someone with real technical knowledge about what they are talking or the subject of the matter. What i am referring to is post like this one: 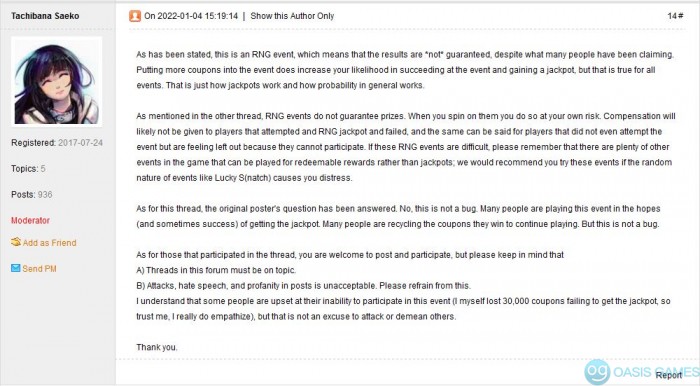 in special the "off topic" part, let me explain why:

Lemme explain some things from a developer and game tester point of view, not even the devs themselves can GUARANTEE that something is glitchless let alone some mod on forum... when some glitch is found and CAN BE REPLICATED with proof it automatically BECOMES on the topic since we are in BUG REPORT thread, it was proven that can be replicated, its the most basic thing as a game tester, the literal basic steps "can the glitch be replicated? if so, the exact steps" if a glitch cannot be replicated, yes than you can blame it on RNG and CHANCES but as LONG AS IT CAN BE REPLICATED... even if is replicated by only 10% of the playerba

and before locking this thread or delete it, this AS WELL is into the limits of ON-TOPIC

Hello,
I feel I've made this fairly clear, but I'll reiterate it again. The threads I closed were off topic. They were complaints, and attacks on people, and many were fairly aggressive, as is yours now.

You are welcome to bring up bug reports, as were the people before you, but they did not do so.

Instead, they complained that we had some hidden inside knowledge of this event, which is both incorrect and backwards, since the very evidence being used as proof of this was player generated and features dozens of reports of non-staff players doing this. There was a suggestion that all players be given 40,000 coupons. There was a question about whether or not this was a bug (which was answered, and which is different from potentially reporting a bug).

Thus, as I stated, these situations were either handled or off topic. As always, you are welcome to bring up relevant, on topic issues to this subforum, but they do need to be civil, which yours is not. Ultimately, many players have managed to get the jackpot in this event. I am sorry if you were not among those players and have lost out. Again, RNG events do not guarantee prizes. However, envy and anger are not good reasons to go attacking on the forum. Please refrain from aggressive posts in the future.

P.S. I have noted your suggestion for you.