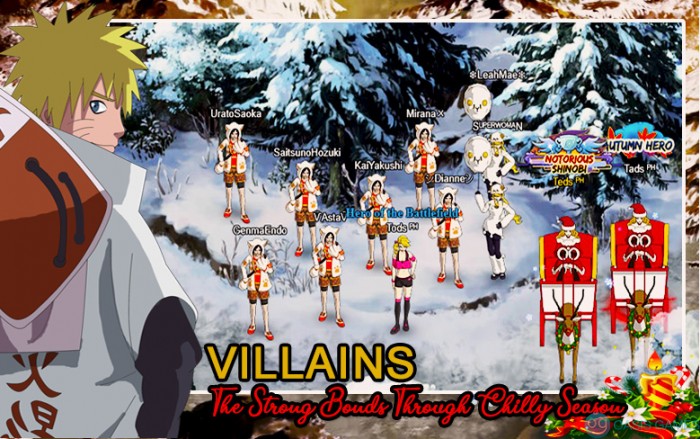 Our group Villains was founded Last April 2021 as a new Opened Server. Leaders in every group were kept on shouting calling for its members. One Leader name Toga convinced me to join his group and promise me a Senior position if I will join his group. Without further hesitation, I joined the group and be a part of the Villains Family. We have recruited many members at the early stage of the game and kept encouraging them not to forgot their daily Donation. We successfully level ing up our Group and kept us getting additional power from the Group Skills. It was so fun at that time, we kept helping each other from the Team Instances, raiding Wanted Missions, fighting Group Summons, participating in Ninetails Invasion and even fighting in Great Ninja War. We have so much fun and excitement considering we are competing for Ranked Battle, Arena , Sage Battle and Power Ranking. We always treated our comrades as our friend but at the same time our competitors in the Server. It was a healthy competition that even other members resorted to an Ingots Recharging for them to have a huge advantage in terms of Power. But those excitements and completion wasn’t last long until every members drop from playing the game, others transferred from other servers and some were totally leaving the game. I am so sad at the time, there were only ten (10) of us were considered as Active in the Group and others were not or semi-active. One day our Leader was gone without saying Goodbye and transferred the leadership to me, it was really a down moment, missing someone who kept encouraging you to continue and play the game. Yeah I know, it was sad but I enjoyed the game so much even if It was me alone and other 5 active members. I had talked to them, explaining the advantage of our position as we progress in the game, I had make sure they understood the disadvantages of keep hopping to the new servers. As we are like six (6) of us active in the group, we kept helping each other accomplishing all Team Missions including Team Events and keep saving our Coupons for the Future Fuku Deals requirement. We were happy and fully contented even if we were just few in numbers until a New Server Merge come into Schedule.

It was last October 2021 this year that a new Eight (8) servers finally merge. I am happy though with the announcement, when the Server Merge finally finished, I am so excited to come online, the first thing I did was shouting at the World Chat Informing Other Players that I am looking and recruiting for New Members, my group level was a bit higher that time (Group Level 9) and confidently vouching group benefits for every members. I haven’t successfully recruiting members due to their current group attachment and their 8 hour penalty. It was hard and unsuccessfully but I kept trying everyday and talking to potential recruits in-game. I had successfully recruited two (2) new members as part of our group, his name is Andy and Ara. I am so happy that time and give the Seniority to Andy. There were 3 Group Active Members in our Servers fighting in Great Ninja War (GNW), but by chance and great participation of my members we successfully won the fight. One of the top Groups in our Server was composed of the Whales-active Ingots patrons, so I’d decided to talk to the Other Group that was the same status in terms of power distribution to initiate merging and will finally give a fight to the whales group-although we knew for sure, we have a little slim of winnings. They had agreed on our merging and they finally come to Villains, they are good people, smart and considerate. We keep talking each other in the group chat, helping each other in all Missions and always sharing tips in the current events happening in the game. It was all so fun to be with them, sharing any possible resources to every member and informing them any coming game updates.

As for this Christmas, they were celebrating with their family but at the same time they will login in the game to make sure we have greeted everyone during the season. It was fun indeed celebrating this season with your most trusted and loyal members, and sharing the spirit of Christmas with Love and Joy.

I am hoping that we will always stay together with many, many, years with Naruto Online while we handle the responsibility of life with greatness and maturity.