I joined my server when it opened 2 years ago. At first, I didn't know how to play the game and I was shy, so I didn't join any groups and do all the missions by myself. TI was especially hard, because I had to defeat all the opponents myself.

One day, the leader of KonohaAnbu group sent me a pm, "I see you around all the time, but you don't have a group. Do you need help with missions?" Then we chatted, and I joined his group. I was greeted by a warm welcome. Since then, I didn't need to worry about activities anymore, because there always was someone nice enough to help whenever I need it. Chat was active, and I found myself chatting with internet strangers about work, life, and everything else. Friendship was formed from the conversations, and internet strangers became friends who gave important advice to real life problems, and the first to approach when I needed someone to talk to.

However, our leader took a hiatus due to his health issues. "Take care of my guys before I return," he told me, gave me his position, and disappeared. My power wasn't strong, but like he did, I helped anyone with activities when asked. Since then, a lot had happened. Like any new server, activity drop gradually. 2 groups remained from the initial 4. Merge occurred, a lot of people contemplate switching, and our adjacent group merged with another. But we stayed, because our bonds were made by our friendship instead of amount of rewards or results of battle. Our group even grew a bit when we recruited some like-minded members, and we made a group in social media. Photos, gifs, and emojis were shared everyday. Some members even posted homework questions, and we all tried to help, despite some never studied related subjects and led to a lot of laughs.

Merge brought activity to a server, but sometimes, also toxicity. There are some people from the strongest group who enjoy pk fights during Rogue Ninja Outburst, and like to attack all other groups in the activity. Some groups tried to bargain and failed. The strongest group wasn't looking for rewards or thrill of battle, they just want to kick you out of the map because you are of a different nationality.

In the end, most groups shied away from the rogue ninja activity, but we didn't. We stayed. Our main priority in game wasn't in-game reward, but we won't tolerate it when members were bullied and sad. So we fought, as the smallest group in the server against the biggest. We saved up coupons, and bought some ninjas, so when they click us in rogue ninja activity, even across 1 mil power difference, their own time was wasted. Some were even stalled until the start of the next wave. Eventually, they stopped, and we could participate in the activity in peace alongside their group. We were very proud of this achievement, and we still talked about it even after months.

This Christmas was our second Christmas together. As with last year, we did a countdown in the group chat. Photos of our real life celebrations were shared onto the social media group, and we learnt a lot about cultures of different countries. We had been talking about making some themed group photos for some time, so when I asked my group to pose for the below screenshot, they were quick to agree and enthusiastic about choosing characters and positions. That was our first group photo, but countless others were taken after that one. We chatted, took photos, took midnight snacks because someone posted a food photo and made everyone hungry, and celebrated Christmas until the morning, to the frustrations to some parents. Celebrating with groupmates were as fun as with any friends in real life. 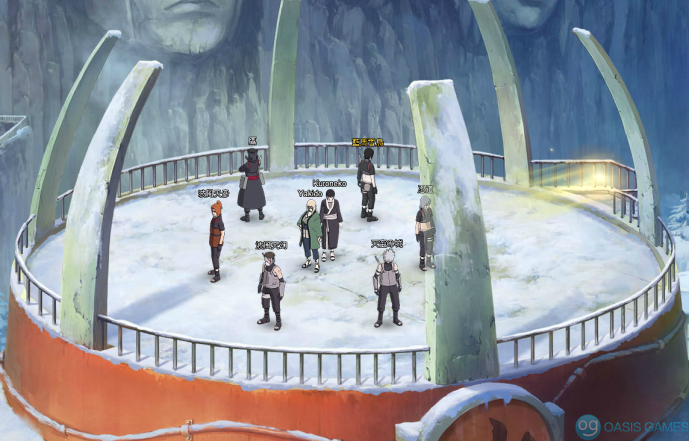