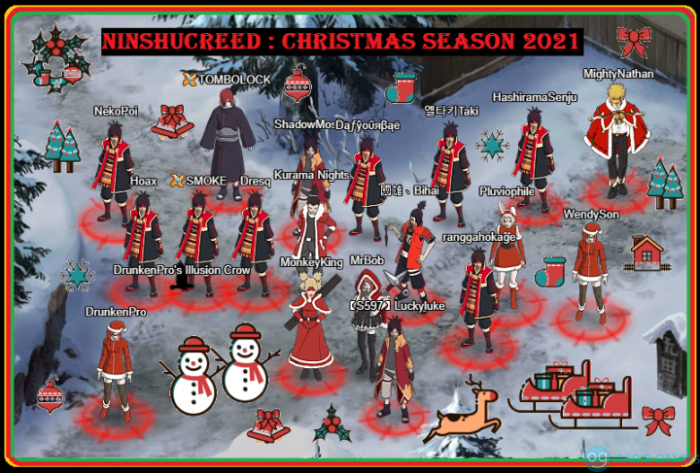 HI, TomboLockd is back again XD, welp for this year group story, I'mma gonna tell my experience with the game not from the group.
I have already did that before and won in prev years entry, so I'mma gonna tell a tale of more generic experiences and lessons i learned
while playing Naruto Online and how I currently am enjoying it these recent years with the remaining members in my current group.

First of all it needs to be said that Naruto Online is a pay to win game, so naturally I have participated in throwing quite some amt in.
As I continue to play I realized the scales keep growing and eventually I can't recharge at the speed others are willing to.
As I play thou, I came to understand the mechanics of the games as well as gain an understanding of how to mix and mingle with gamers
In the beginning of the game, there were a lot of players from a wide range of society and backgrounds, there was a lot of hype,
a lot of roleplaying (one of my fav parts), and a lot of vigor and variety of competition, the mix of oasis fanfares and player/forum interaction
was sometimes interesting, some times overboard and toxic and often in game there was a lot of fuss on getting plundered and losing.
The game has both change me in some ways on how hard it was to mingle around with players, and it forced me to do breakthrus
on myself, my viewpoints and what it means to play the game, or even sometimes why do so much toxic exist. To me it's mind *ing

and fascinating at the same time, but it c*so get worrying and disturbing, it took a long while to get used to and remain active after
many players came and left, over and over, with covid and lockdown and RL interfering and with only a small handful of people
still managed to make sense of enjoying what we have. As I progress in playing/rping or do chall drawings I also came to study and write
some articles on various issues of people, persistence, training and keeping oneself mindful, aware and healthy. The game came to mean
a lot to me because of all these interactions I get from mingling with all sorts of players from really nice and patient ones to really nasty
and weird (imo) personalities, sometimes it took a while to get to know who is who, but eventually one get to befriend enuff to have a
community that seem to be rather self supporting. I had played the game for abt 3 year only frm 2018 till now but it felt forever and I
have gone thru so much both emotionally and technically that it has sorta became a way of life. Discord and facebook became
an indispensable support together with my own side works on building an idealist group that help me pull thru both understanding
people and society. Nowadays the people in my server are familiar enough that we hardly have as much toxic-ness. We're all trying
to move on from one era of Naruto Online to the next and that legacy of the ever presence is something we learn to cherish with all
remaining groupmates that join in for various activities in-game grinding and chats. That photo above is something we throw together
on the occasions to remind us of our own presence both as real people and playing and hanging on to our past, present and plans for future.
======================== THE END === THANKS FOR READING ===========================================