Id like to suggest that you remove tracing "Kill" option in SWB: 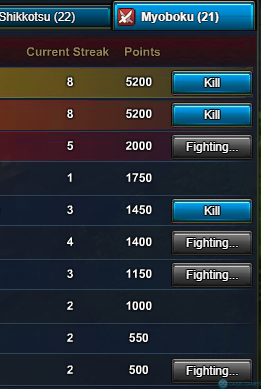 When weaker players, by some miracle, get a few wins in row, those 1M+ p2w players can trace them with that option, wherever they hide, using simple click.

No maneuver is useful for evading those chases...

That will not solve problems. The only thing that will make SWB fair again, is pur people together according to BP not their level. Now you see players with 300k BP on the same SWB as players with 2 million BP, same goes with Matsuri matching and every other matching in the game.

Yes, I agree, but those events are made for level keeping. I get it, and I dont think they would change that (after all p2w players and lvl keepers would ob

Like I said, remove kill option, so they had to try a little harder to find specific players.

Also, they could remove info about number of victories/rage above heads, so other players cant easilly tell who got how many victories/rages.

Hello,
I will submit this suggestion for you, though I will point out that this will probably do little to help in your theoretical 300k vs 2M bp situation. With that kind of power disparity, the higher player doesn't need the targeting assist to find easier players to attack.

As for the groupings by power, while often lauded by players in the mid-power range, this is actually a more infeasible idea. It would create a situation with the same kind of rankings, only people would be complaining that 'those darn 500ks are killing us 300ks' or however it was arbitrarily decided to create the power gap between brackets. Not to mention that whale-level players under the proposed system simply wouldn't be allowed to play, making the entire system completely infeasible. With such a bracket, a 3M+ player would have perhaps 4 other people he or she could do SWB with, meaning SWB would never happen. Obviously, that's an issue. That is one of the reasons that sage is ba