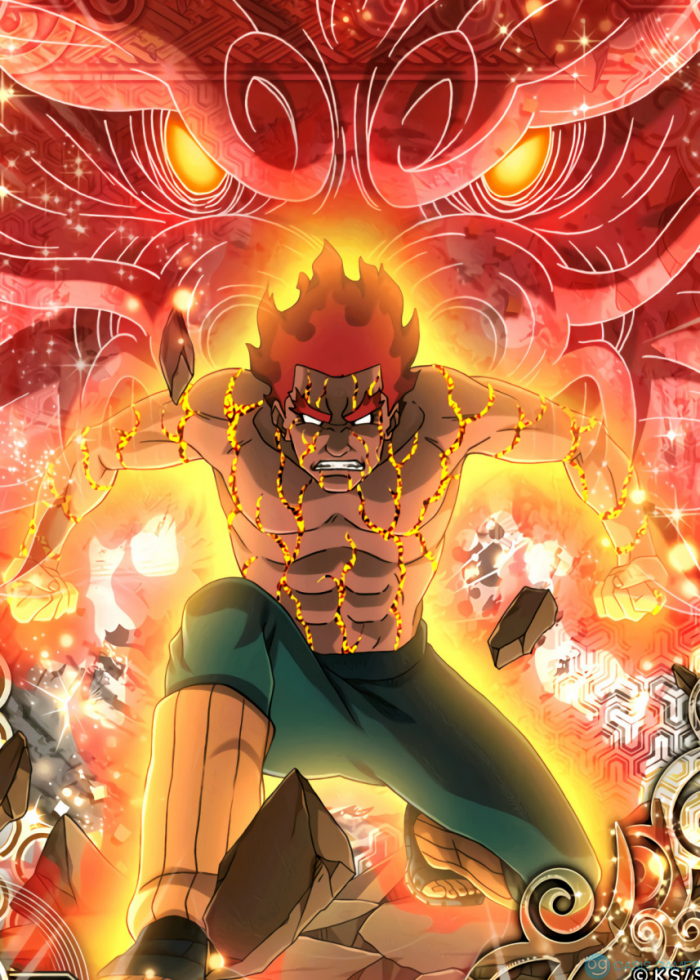 Please do design the ninja as how it is shown above in the image, where there is red lightning streaks around his body.
No clothing cover up. While transform idle in town, spawn a red Dragon head every few seconds like how all the Susanoo and Hashi Wood statue appears.

Mystery: [Death Gate - Red Vapor] Activate 8th inner gate formation and increase attack by 20%. Can launch up to 3 - 5 Standards attacks [RNG] in this round. Each attack will consume Might Guy 3%HP.

Standard Attack: [Sekizo - Evening Elephant] -Deal Taijitsu damage and 4 combos to a random horizontal row. One random unit will also suffer irremovable Flinch status until the end of the round.
[Flinch - Ninjas suffering from this status is unable to attack or chase combo and also unable to avoid chase combo from opponent but can cast Mystery] 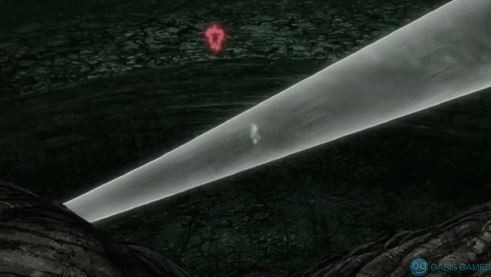 Passive1: Each time Might Guy attacks, increase ATK8% and INITATIVE 0.5% (Stackable). Might Guy is immune to all debuffs and have a high chance to evade 1 attack (Mystery, Standards and Chase) each round. Additionally he has 65% chance to avoid Standard attacks.

Wow such a great suggestion +1

It seems to me that it is very weak for Guy (8 gates) to have a Secret for 3 additional attacks.The chase can be done for damage to 4 enemies(Hirudora), and weakening or lowering protection and resistance by 8-10 %.The usual attack of the Evening Elephant-hitting one enemy, also somehow weak.You can do damage in a horizontal row with repulsion or just damage to 3-4 targets and repulsion.I completely agree with passive skill # 1.Also, I would put immunity to debuffs on passive skill # 2.

Yes, it is made to be that way as his standard attacks will caused irremovable flinch status that cause the ninjas unable to attack or avoid combos. I think it will be overly powered which then F2P will not able to get him. Able to attack between 3 - 5 times, which is almost the whole team if he attack all randomly.

Agreed on the chase and standards attack, will update the skill list. Thank you for helping improve.

This is great, wow. Change evade to counter, just a suggestion.

Hmm to counter as in to return damage as it evade?

If so, Guy might be too overly powered, F2P may not be able to get him though.

Certain chance to counter any attacks, and return 5% current HP of Guy as damage.

This is to ensure not too overpowered and also how it simulate as Guy fights longer, he grows weaker in his health.

But then again it is hard to put these two passive together with the 65% chance to avoid standards..

What do you think?

Thank you for your suggestion.

Hello, I like the discussion that has been happening here, and the consideration of power:cost that has been considered. I will pass this suggestion along.

2) standard attack: hits all enemies in a vertical column (across all teams), unavoidable

3) Chase: Chase causes has chance to cause High Float.

4) Passive 1: Guy has Lvl 2 Immunity and cannot avoid attacks. Attacks that target Guy deal only 10% of their normal damage (rather than dodging)

5) New Passive 2: At the end of every round: Guy receives damage equal to 50% of his Max HP ignoring armor. This damage cannot be prevented.

bruh, as night guy, he was literally "warping time and space" around him and you give him only 40% splash hehehehe

So mystery will be like Obito Rage Mode? Cost HP to cast?

Horizontal standards seems nicer if we were to follow the Evening Elephant, creating air cannon in a straight line.

I think combo chase usually dont have a follow up chase status though but thank you.

Eg, 50k HP, he received 25k HP damaged at the end of first round. Leaving maybe 20k left for round 2.
Moving to round 2, wont he die by the end of it if he were to received 25k damage again since its 50% max HP.
Will this actually backfired since he wont be able to cast NightGuy mystery too..

But thank you, I will add some adjusts ba

As the anime, it only shows Guy VS Madara. So I am guessing Night Guy is like a sole single target special. 40% splash is something extra. Hehe.

If I were to put 80% splash like Naruto 6p, we will have another overly powered ninja, although Might Guy is definitely OP in his final battle.

Night Guy bodies 6p Naruto in the anime tho, so why not

I think we watched different anime. 6path Naruto is way stronger than Night Guy and literally episode later it was this Naruto that saved guy and 1 shoted Madara with Lava Rasen Shuriken.

I hope you are actually sarcastic rn hahaha. No way in this world is 6path Naruto ever beating Night guy. He can only try to survive until Guy dies but thats only ''if'' . How is revival of another being gonna help Naruto in the fight against 8 gates Guy? Also Guy is known as the ninja who dealt the most dmg to 10 tails Madara so yeah, i hope you are sarcastic yet again. I dont think you realise how overpowered the 8th gate is... It gives you 100x normal power, this power alone far surpasses the power of the combined 5 kage. Also, 10 tailed jinchuriki, which was Madara in that case couldnt even keep up with Guy's speed, so what makes you think Naruto alone has a chance?

I completely agree with Indra.Guy (8gates) this is not the kind of ninja who can get f2p for free.It should be not just powerful,but super powerful.I also agree that the passive skill #2, which takes 50% of the hp from Guy at the end of the round, is not logical.Only death after the Night Guy.

As a method of obtaining it, for example, it can be obtained from the GNV Chest - as well as fragments of Hashirama.Donates will pour ingots into the burning need to get it as soon as possible,as well as f2p players can get it there,but much later.But to reduce his abilities so that everyone can play for him, not for the purposes of developers, I think!I apologize in advance for my directness,I am an f2p player myself and would really like to play for such a Guy.But, such ninja as Madara jinchuriki 10-tailed, Obito jinchuriki 10-tailed, new Pain Tendo their f2p players can not get just like that, what is worse than Might Guy(8 gates)?

I was hoping that you are trolling but you are actually serious oh boy... i could drop essay why Guy is not even close in power to Naruto (like legit Naruto is multiple times more powerful than 8th Gate Guy to the point that Guy would not be able to do anything vs Naruto in 1vs1 fight) but it's waste of time looking by your response [it's like you ignored entire story and went with fanboy mentality]

Just google some power scaling or check youtube. Most of the time I dont like youtube powerscalers and want to think with my own brain but you won't find anybody that thinks that 6path Naruto is weaker than 8th gate guy so in this case it works. It's not close match up at all. Naruto wins 1 out of 10 difficulty.

Guy didn't win vs Madara, he lost this fight even tho he had support from other ninjas. Madara didn't use any offensive jutsu, He didn't use limbo that would 1 shot Guy and just played trolling / underestimating defense game for fun. How guy fanba

Naruto and Sasuke at the peak of their powers, caused Madara several times less damage than Guy(8 gates),they could not kill him 2nd at the maximum!It is not written anywhere that Madara was just playing with Guy.It is unlikely that Madara could have done anything against him until Guy fell himself.We start from what we saw in the anime,and everything was clearly visible and clear there.

Hm, maybe the Flinch part is what i don't really like about this Guy. But even without it, he will be a whale character, so it doesn't matter i guess.

About the Guy vs Naruto question: um... Truth Seeking *.... And ofc we can consider the fact that Naruto won't let himself be damaged, like Madara did. (and Guy had help against Madara, so yeah...)