I just want to report a possible Bug in Group R&D (cause I am not really confident - I could be wrong about this so bear with me hehe). Arena-Advance Mission [phase2] seems not to be working.

It has been going on for 3 weeks since I first noticed it. For the first 2 weeks I failed to do*ent it so on the third I made sure to capture everything as much as possible. Maybe it has always been this way since the beginnig, but the desc

Key points as to avoid confusion: (Most all know this - but to make it clearer to all) 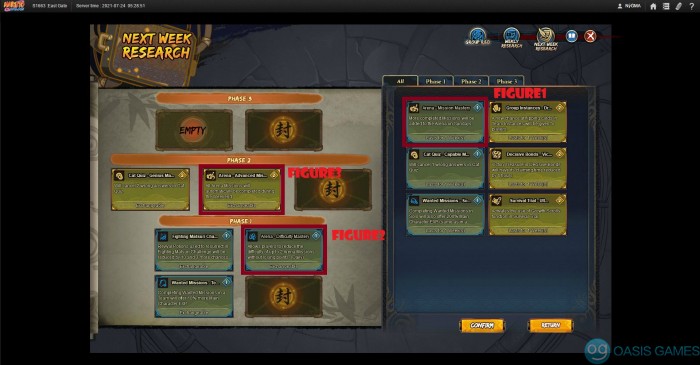 ***Arena missions can be carried over the next day. The max i think is +6 bonus missions, meaning 8 missions in total per day (correct me if I am wrong on this)

Note: Group level is not that high so our research cards are not that many.

I have always used Figure1 until I discovered that there is a good potential in Figure3. I had this idea that sometimes I can choose between doing more missions (more moons) while other times I can go for less arena battles and more auto wins (best case about 4 days - when laziness kicks-in).

So I tested it out.

Result: No missions were automatically completed (Figure3 - not working)

Remarks: Well it did ot work, then I completed all the missions so back to zero bonus missions at the beggining of 3rd week

Saturday - added 6 missions (even tho we are not using Figure1) 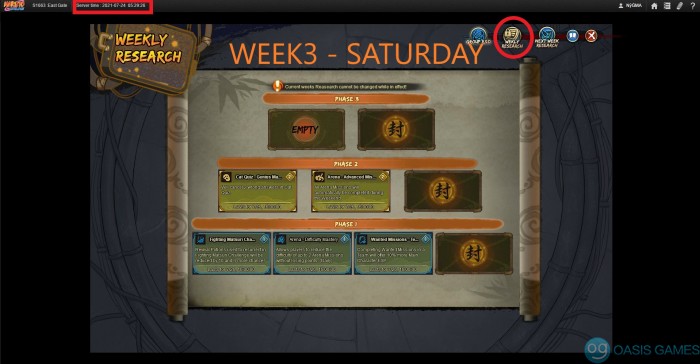 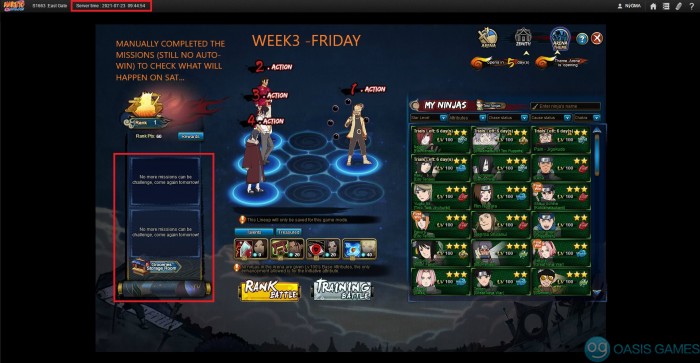 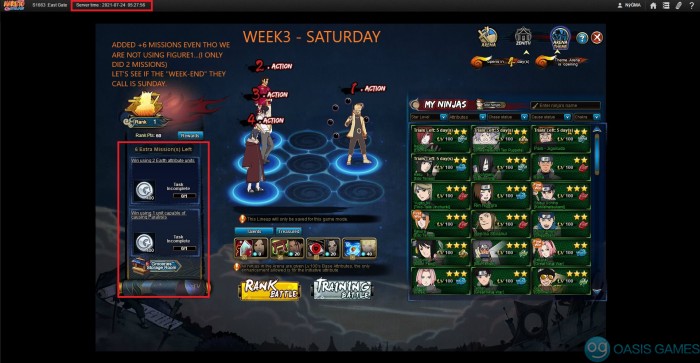 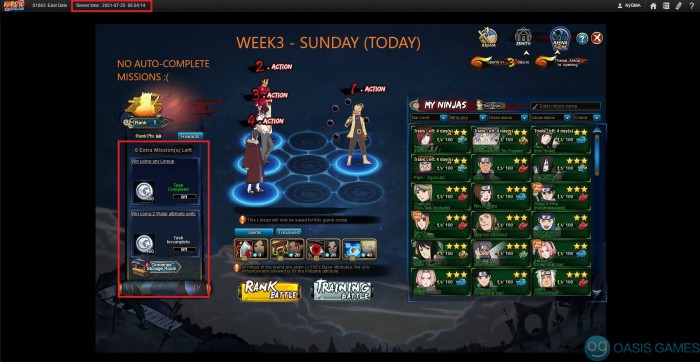 Remarks: All other researches are working just fine except for Figure3. Just that even if I don't want +6 missions (crazy me lol) it just keep on giving me while the auto mission complete that I want is not given.

Now, I have this nature that as much as possible I want to know the game, it's whole features to maximize my options (tho I still have tons to learn i guess hahaha). Others might say I think too much, well I do as I said I am an enthusiast. Probably the main reason why I do not complain that much LOL.

All of the week 3 scenarios was captured for do*entation purposes.

I could be wrong. I could be missing something. Or it could be that it is an actual bug. Either way, kindly enlighten us of what is happening. To see it more clearly, I think one must try it atleast 1 time, if you wanna dig deep into it. haha.

Hello, Edward,
I will look into this for you,
Thanks!

Please let me know,
Thanks!

P.S. I also think that since this is the upgraded version, it may also grant the full +6 missions. I will try to see if I can find anyone that actually uses this R&D this week, but chances are low. Please let me know how this weekend turns out.

Anyways, Tyvm. Sorry for the trouble. Kindly update us when you guys have the answer. Might actually take a while but we can wait :)

Actually yeah I do*ented it too. I can reduce the difficulty 2 times without reducing the moons. It's perfectly working. Just the "auto complete missions" seems to have a bug. :) 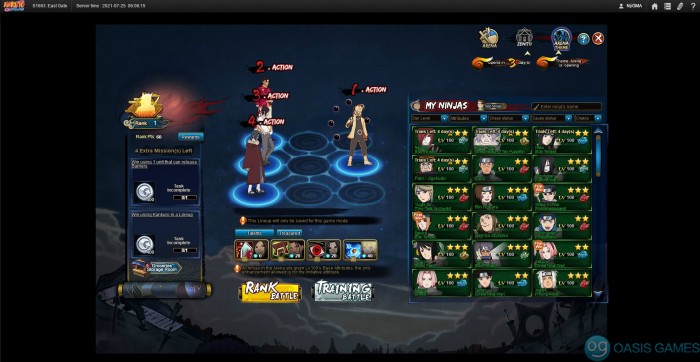 Used 3x Difficulty Reduction. These are all missions for today (Sunday). The second picture showed 200 since it was my 3rd time reducing the difficulty. 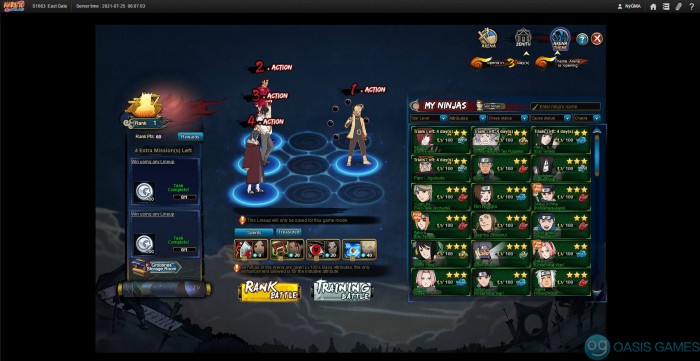 Well I'm wondering if maybe the way that this manifests the "free" Missions is by allowing you to turn all missions into the "win using any lineup" mission without any loss of moon scrolls. But everyone I've talked to doesn't know because no one uses this because moon scroll capping is so easy that no one bothers with this R&D.

However, you can't test it right now because it's only effective during the weekend. I do have someone that's volunteered to test it for the next weekend, but that's a two week turnaround at this point. I also have a few people that have just stated that it doesn't work, but the information is pretty out of date, sadly, because, again, no one bothers to use it.

Oh okay I understand. Yeah it seems like this kind of research is not that useful in late game gameplays afterall.

Anyways, I appreciate the effort. Thanks for those who volunteered btw. Any additional info is always of good value to the players.

Kindly update us if there is a definite answer about this query. It might take a while but I(we) understand. Thank you and have a good day!

Hi @Mod Tachibana. I have followed your suggestion to reduce the difficulties of all missions (those not highlighted in green only ofc :3) during Saturday and here are the results: 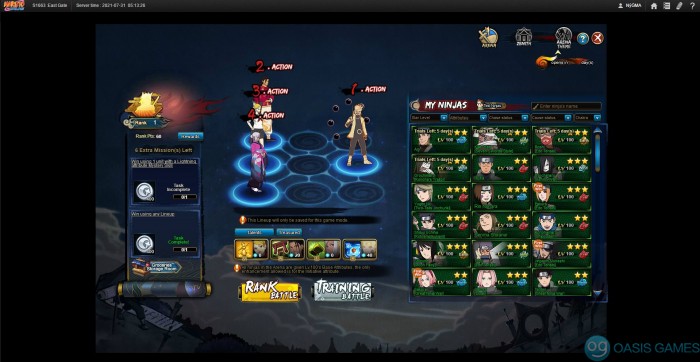 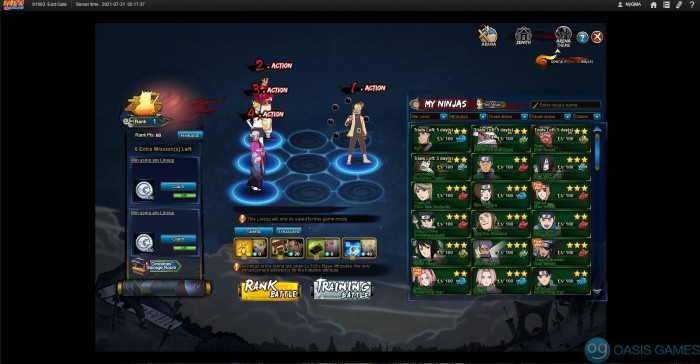 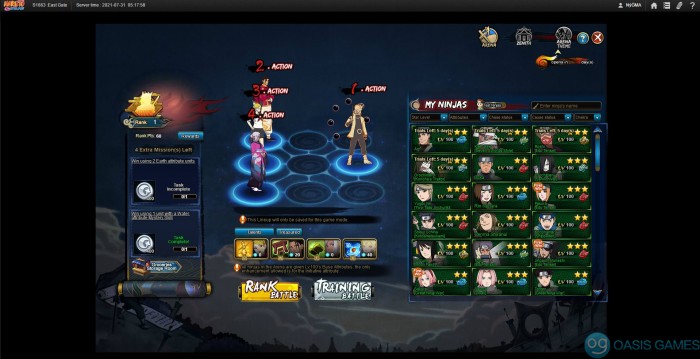 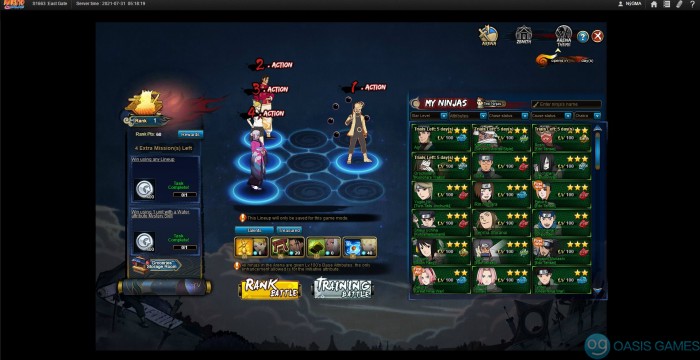 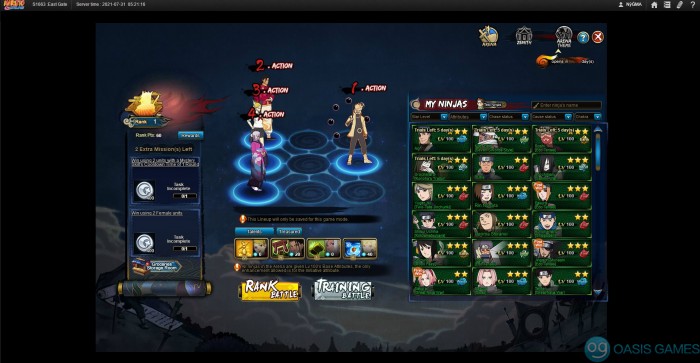 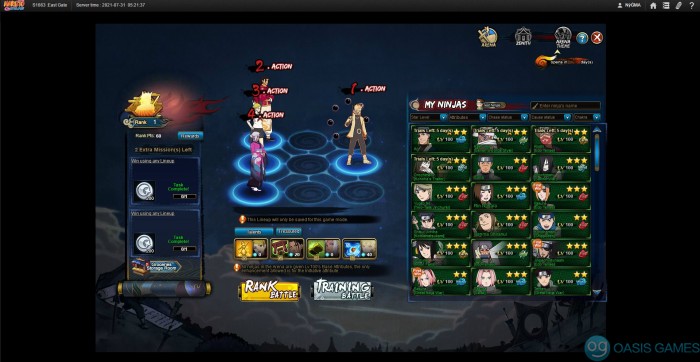 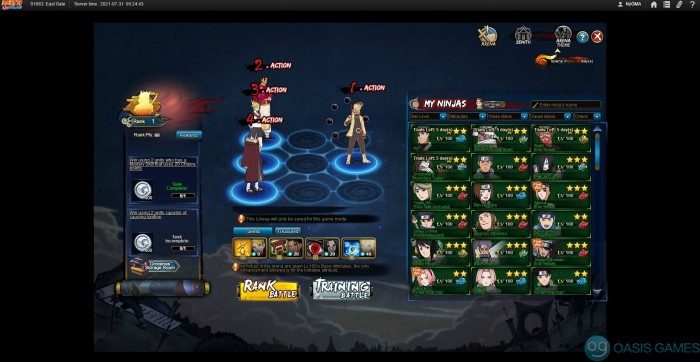 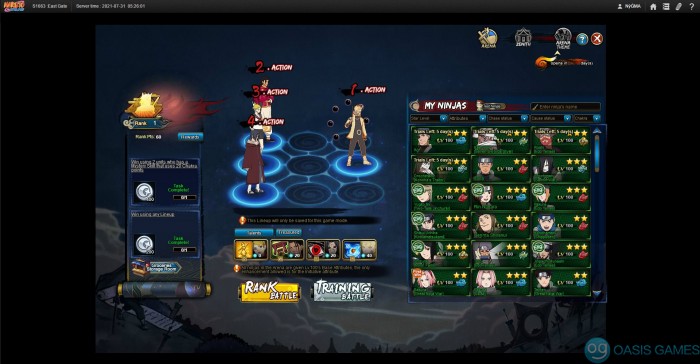 = they give +6 added missions

= missions are not auto complete

= missions are not auto complete

To further simply things, I guess it is safe to say this one really is a bug after all. :3 Altho others are still encourage to try it out if you want.

For full transparency, I always have the pictures in full screenshot. Here is our Current Weekly Research Set-Up 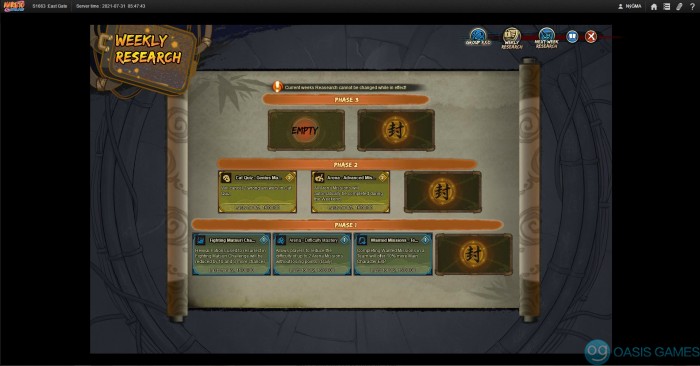 OK, the person that's supposed to test this for me is supposed to do so this weekend. You should also be able to test it this weekend. Let me know if you're able to make all the missions "free" without reducing their value (all eight of them instead of just two).

Alright, we tested this this morning, and the R&D does work, the text is just poorly translated. This R&D is an upgrade from the phase 1 that only gives missions on sunday. It gives the 6 bonus missions on Saturday as well. We'll test tomorrow to see if it does the free team reduction thing as well, but right now we think it's just the bonus mission for an extra day (Saturday in addition to Sunday).

OK, we tested it and it just gives the saturday bonus, that's the whole purpose. It's just translated poorly. I'll put the report in to have the text updated to be more clear. Hopefully this helps.

Ah okay. My last experiment was way back July 31 (Saturday) and the next day it did give me another +6 missions if I remember correctly. I initially thought the bonus missions came from the refresh of Arena Season (August 1), but now that I think about it that may be because of our R&D.

Anyway, looking forward to it. We also still are running the same R&D, we'll see tomorrow if another +6 will pop-up. Thank you for the update!

I checked the missions today and they only gave me 2 missions (same as a normal day). There is no Auto-Complete Mission and/or additional 6 missions on Sunday.

* Gives +6 Missions during Sunday only (or Saturday only - can't remember. But only either of the two, not both) 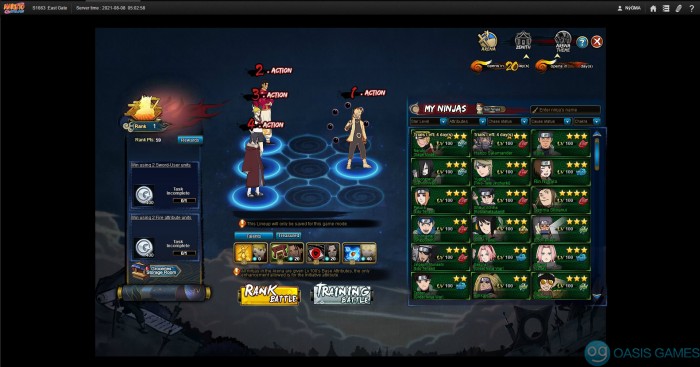 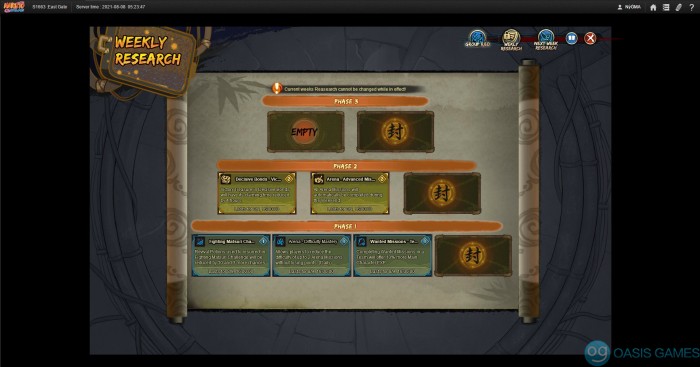 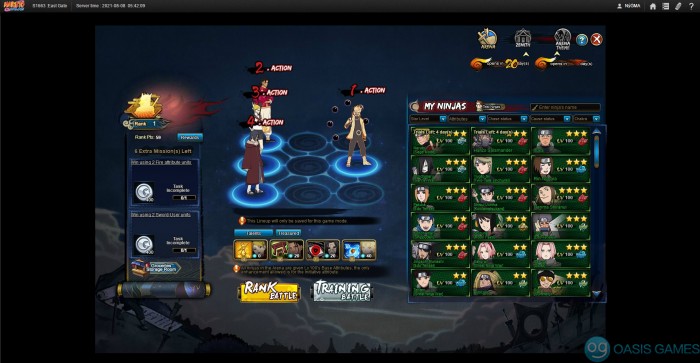 I didn't do anything, at first I logged in at around 0502H LA time and I only saw 2 missions. Then all of a sudden (without refreshing the page) +6 missions pop-ed up just now. Kinda weird but I guess it works! Thank you so much.

This R&D is such a drag xD. I thought I would get "auto-wins for 4 days" but turns out to be something more useful - tho again such a drag lol.

This issue is solved! And also, I will appreciate the update regarding the wordings. Players might find it confusing, especially in the future. Thanks for the help!