Cancels all [Debuffs] of all units in your lineup. Additionally their Mystery Cooldown (except Breeze Dancer's) is reduced to 0 and their Mystery's Chakra Cost is reduced by 20 until the end of the next round.

At the beginning of round 1 and 5, summons a [Water Clone] with 60% of Azure Fang's HP stat with [Healing Jutsu] as its Standard Attack. Whenever the [Water Clone] is defeated, recovers 30 Chakra.

has a very high chance of evading the first attack each round.

For every 10 Chakra that Midnight Blade uses, increase his [Attack] by 6% and his [Critical Rate] by 4% (stackable).

:At the beginning of round 1, 4 and 7, summons a [Lightning Clone] with 45% of Midnight Blade's HP stat with [Lightning Assassination] as its Standard Attack.

Before the first action of the round, cancels all of his [Debuffs], becomes [immune to Debuffs] until the end of the round and increases your own [Ninjutsu] by 20% (stackable).

At the beginning of the battle, Crimson Fist and 1 random [Male] ninja in the lineup will receive [Super Armor] and a [Shield] ba

:Whenever Crimson Fist is attacked, increases 5% [Defense] and [Resistance] (stackable).

:Crimson Fist has [Super Armor] (immune to Low Float, High Float, Repulse and Knockdown). Additionally, increases the amount of [Shield] that he receives by 50%.

Great Water Arm Jutsu is Skewering ...as to stop any and all confusion

Just doing my part ,,,the only reason i know the info is because its posted on the Facebook events info and noticed it wasn't posted in forum events

Thanks for the information !!

I kinda like and hate the changes but at least they're trying to make it better.

-Old Skill Guidance definitely needed a rework (was kinda useful when I cleared Ninja Exam 299 and that was probably the only time I used it) but I'm having doubts on the Super Armor not being removable even by Super Armor removers. Hopefully it really is not removable (in the long run).

-50/50 on the new Bottom Force. Replacing the Attack buff stacks with Resistance buff stacks is kinda nice especially with the upcoming irremovable Toxic/Toxin which I hope still has the damage formula of Poison (DOT damage reduced by Resistance) but still kinda *s because I'll miss the Tank/TaiDam type Earth Main. Hopefully at least 1 or both will give out additional 5% buff (10% Def/5% Res, 5% Def/10% Res, 10% Def/10% Res) on the Second Nature version.

-I like the rework on Heart Flux. Don't know if only New Year Hashirama can do it (just got back from the game, been playing for almost a month now) but I hated that debuff that reduces your max team chakra to below 100 so this rework kinda works in favor of my Light main but I'll definitely miss that Light Main blitzing in later rounds in Ranked Battle and Strong Approaching.

-I 100% like the rework on CCT. MK summon ability now is just an upgrade instead of a necessity if you want to use the Second Nature Mystery cooldown buff. My only concern is I haven't unlocked the Second Nature version yet. LOL!

Keep up the good job, Oasis!

At the beginning of the battle, Breeze Dancer and 1 random Female ninja in your lineup will become immune to Debuffs, and receive a Shield ba

Either they missed this, or this was intentional to make it different from the Chinese version and so you can choose for Tank (Earth Release Bottom Force: 5% Def, 5% Res buff stacks) or Tank/TaiDam (Water Release: 10% Atk, 5% Def buff stacks) Earth Main.

Where are all these improvements? Can they be seen in talents? My Scarlet blaze nothing changed.

check today since it is now the 27th

1 hour ago check, nothing. Now. 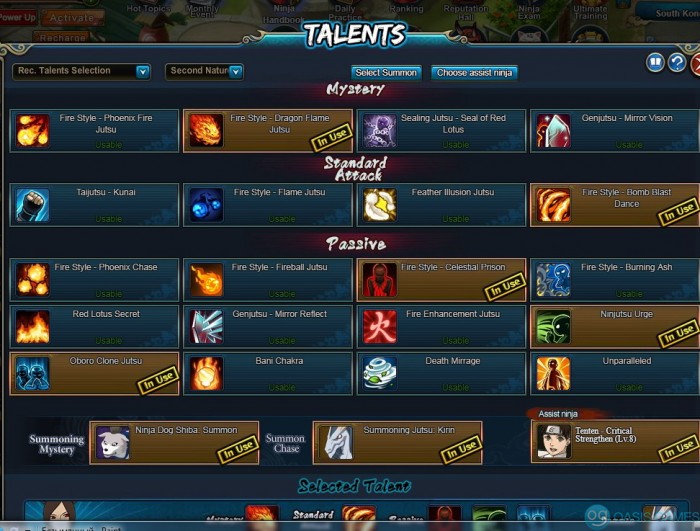 The Main Character Skill Changes is actually posted in the New Event Thread below the List of Events. But, thanks for the concern anyway.

Doubt it was conscious decision, as this clearly is interaction between changed talent, that has further upgrade with 2nd nature. It makes no sense to justify this as a progression option, as if they wanted more diversity we would have 3rd nature implemented. Also changes to ba

However looking at skills that were updated in cn this might also create a problem in the future to:
Water main heal standard. /change on ba

right now earth main's bottom force is scalling both def and res but the biggest middle finger is that bottom power ultimate, the upgrade of the bottom force is not updated and basically you give away 5% res for 3% attk , it literally is like a downgrade instead of upgrade

1.) Heart flux was so badass because the power up great and it was simple! for each chakra point over 20, his atk would be increase by 2%. now he has to *ing use the * chakra in order to get at most, 40 is his highest chakra usage, 24% and 16% increase in atk and crit rate. You know how *ing useless that is?! no one *ing uses LM as the main damage dealer because all the * ninjas out there do more * and makes his entire increase in strength all for naught! he barely makes its as a support as it is compared to all the other mains.

2.)Clone Combination tactic. Who the * uses that instead of wind release variant? I tell you and its no one! oooh big surprise i get to summon ONE clone that has only 45% of LM's HP and i can summon him again in the 4th and 7th round BIG *ing whoop. Do you guys even *ing pay attention to your own game or are you all just using the last of the money you guys scammed for drugs?! One clone is not going to do anything to other opponents besides being a * meat shield and telling me that i can summon another clone in the 4th and 7th round is nothing considering how easy it is to destroy.

To the people who made these changes in Oasis, i hope you guys get fired from your jobs because you did absolutely nothing to improve LM and made all the other mains more overpowered. go * Yourselves

Hopefully. I really like to test out the WR: BF's supposed 7% Def and 5% Ref buff stacks since I'm using a Tank Earth Main. I'll miss the Tank/TaiDam Earth Main.

Thats why I mentioned China. We should have to get def/res bottom force, because attack on earth main is useless. What about lightning main's clone nature cultivation? Has it been changed to 1 clone?

The talents are the same, just their desc

"because attack on earth main is useless"

because most of you dont use anything other then shield spam...