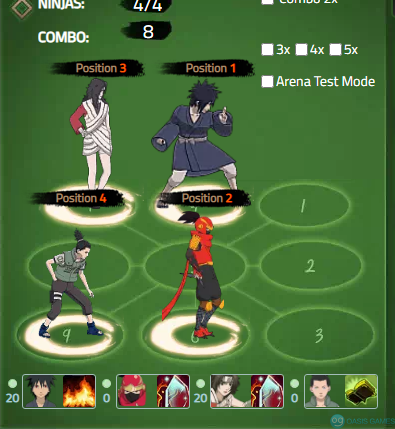 Just rock with this, I think this is gonna be more enjoyable to use since u have alot of dmg from Madara, this is your best option, just make sure you use red lotus secret from fire main with death miragge.

You mean a power team and not a pretend fair fight team? Yeah, those are hard to come by on this forum.

Unfortunately, you do not have a good power team damage dealer for fire main.

GNW Choji scales super fast with sword main, but he doesn't have super armor, nor does he dodge anything.

Invest in an event ninja or get 4* Naruto like most.

***I have noticed this thread keeps on appearing. (I assume you are upping this thread because you still haven't gotten your desired answer altho many have already shared their ideas)

Well IMO creating an "effective team" for other players is not that easy. There are alot of parameters to be considered. I'll name a few:

There are alot of players who know this already. But there are still those who don't so please, let me :3

1.a.iv Your BP Vs others' BP (Server/xserver players)

Sample scenario: I remember a time when my low spender friend and I fought some guys in DB.

We both have stacked pos1 damage ninja & control ninjas (having gourd tools) - which left the top player paralyzed for a couple of rounds.

He did not have a good support from his teammate thus resulting to a loss. Things could've ended differently ofc.

Point is, overall lineup synergy with teammate is something worth noting.

1.b.iv Your BP Vs others' BP (Server/xserver players)

Note: Actually there are tons more: there are so many parameters to consider. That is why it is very difficult to suggest for pvp lineups :)))

-outcomes are still unpredictable, but much better than actual BP battles

Better if you would identify the purpose of your Lineup suggestion so others can give you a better suitable lineup.

If what you're looking for is under 1a-1b, then expect inaccurate outcomes during your every battles. Hope you can find what you are looking for!

Naruto6p full sb pos1, edo Nagato full sb pos2, your main char pos3 and Rin pos4 with the Chameleon for summon can be your regular team for most of the PvP events, but not for Nine Tails and Rogue Ninja events.

Iruka full sb can be one more usefull ninja to buff your Naruto.

Try getting King Of Hell summon and/or Gamariki