first i am not saying make him for free or reduce his price or whatever,

simply he is already expensive and then he suddenly started disappearing from events, and became once a month ninja....was ok eventhough it was annoying but we at least got a window to spend on him last time was a month ago at fire works, now he is gone no where to be bought and suddenly i noticed him at super exclusive hand picked bazaar for just 175 cps a frag while it's normally for 280 a frag. i am not complaining about that it's natural to give incentives to players to spend. but excuse me who will spend 10 bucks just to be able to buy (spend further more) his frag while he is a year and half old ninja instead of spending on n6p or even kisame? and he keeps getting outdated by the passage of time, and before some one says so i want him to be there every week instead of any one of the ninja nobody goes for it very few number or just fewer than him to free redeem him? No i just want him to be there as it used to be once a month and will be great if twice a month ( once every 2 weeks) at any non exclusive event even if he will remain for 280 coupons per frag. at the same time konan swim suit is present twice, and in previous cycles many ninja were repeated twice across different events while some others like him and for many weeks (around end of 20020) Minato edo tensei wasn't even there as an example. 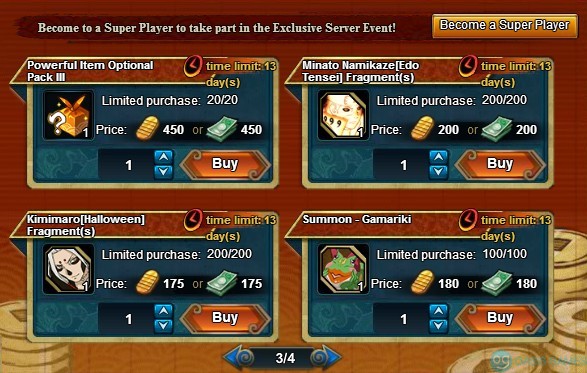 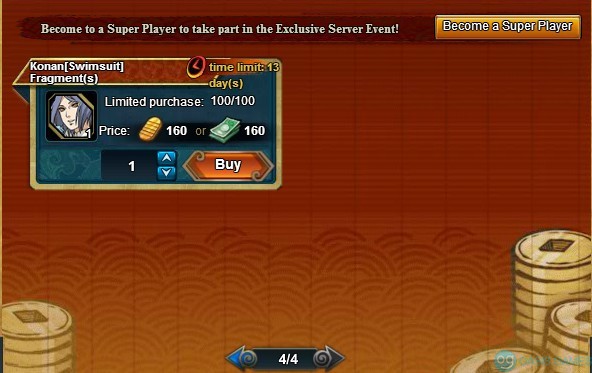 it is unfair even for anyone who recharges in general but who doesn't want to recharge during this cycle for any reason, even if he recharged earlier and already ac*ulated the coupons he needs like maybe through naruto froggy which doesn't happen to be with kimmimaro halloween often recently, or any other once a month ninja.

like we all got either hashirama or madara warring states for free then they were both at 3v3 + being so cheap at mostevents for 4 months so far, so i bet it will be better to replace them with him and wny one else that people want.

so to sum up, all i am asking for is a window or 2 a month that allow us to buy him (kimmimaro Halloween)with coupons through redeeming events as he used to be like fireworks for example, "non ingots exclusive" please, he is a year and half old and was out there already. thanks

Hello,
Ninjas phase in and out. He'll most likely be back soon!
Thanks!

edit: would you please submit that I suggest that he be available for exchange in the next missions of general mobilization?, thanks alot.

thanks alot in my name and anyone who was in a similar situation, for putting him at missions of general mobilization

this thread has been answered