An ANBU came reported that our friend who abandoned our village was seen outside the Hidden Village in the Leaf. We need to prepare a team to recover him. He's a special Tomodachi so we cannot abandon him!

How to Join: - Create a team consist of Original Konoha Ninja Versions together with one Returning Player and battle a NPC units outside the villages. Take a screenshot of the battle and explain why your team is effective in battling enemies and how this team will help you bring back your beloved friend back in Konoha. 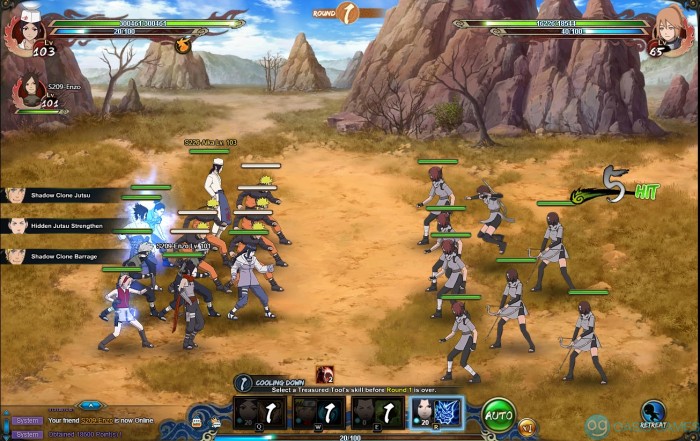 Reminder:
Please make sure to submit the correct information to qualify for. Include your Region and ServerID, In-GameName and your UID ( You can find your UID here ) together with your Partner's Details also.

Original Regular Ninjas, are the ninjas that have no theme attached to their name. Means the very basic or regular version of ninjas like Naruto, Sasuke, Sakura, Kakashi, Guy, Asuma and etc. (Not Naruto[Sage of Six Path], Sasuke[RinneSharingan], Hashirama[New Year], Itachi[Cat Ears], etc) 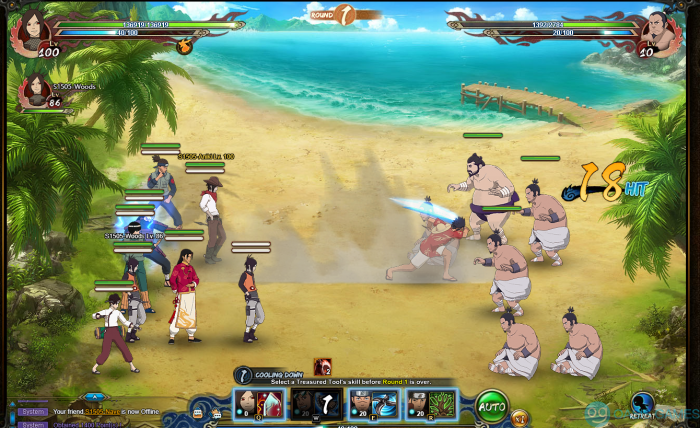 Well defeating NPC is easy but when you are grinding for some levels what's the fastest way there is possible?

A full buffed Asuma summer and an old friend you see after a long time.

After seeing the cool animations and powerful strikes of Asuma my friend was overjoyed and start playing this game again.

The reason its effective to bring my friend back is because he once said hes favorite ninja is Kakashi cause he looks cool,and the thing he hate the most is frog 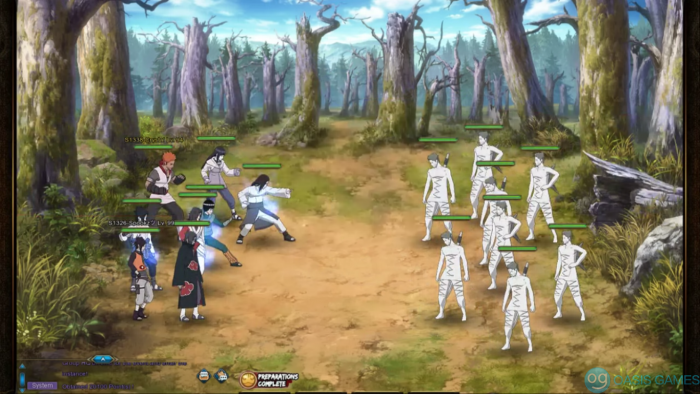 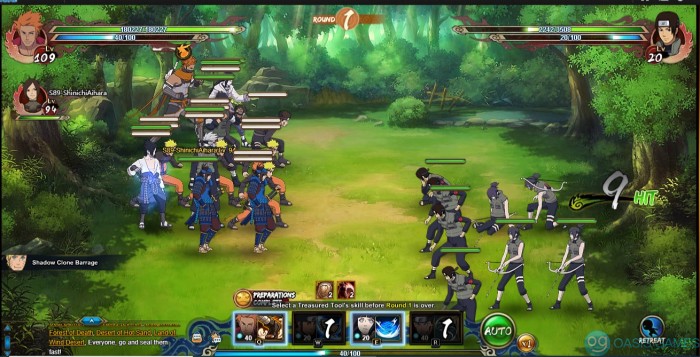 use the originla konoha and back in time to beat the ninjas use hinata for sheild and use the ninja that make clones in the front line and make a good compo team now its time for naruto and his friends to beat the bad guys focus on shield and clones and show the meaning of real ninjas . 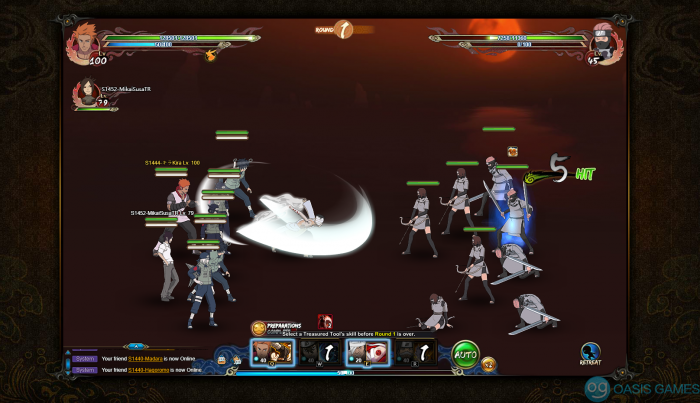 With a top-level anbu's team led by Danzo, it will be much easier to find our lost friend.

It is the barrier of Danzo, which allows us to easily defeat the enemies in our way. Wind, fire, lightning ninjas gain 40% attack and ninjutsu. We can clean the enemies we encounter very easily.

and highly compatible with the team of high-level anbu's

I guarantee that we will find our missing friend as soon as possible. 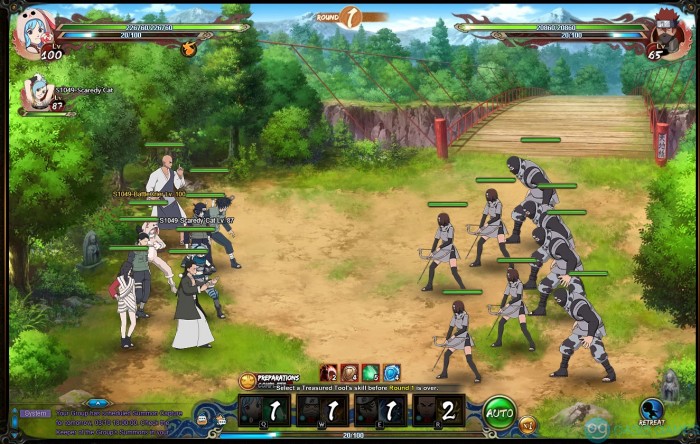 Team BattleCrier (Kotetsu Hagane, Hayate Gekko, Chiriku, Water main)
- Kotetsu is stacking own taijutsu for every chase he does. By round 5, he chases up to 10 times (5 times Low float to Knockdown and 5 times chase combo) which is up to +50% attack scale.
- Kotetsu decreases enemy Defense and Resistance by 8% every 2 rounds with mystery.
- Kotetsu´s Lowfloat to Knockdown chase ignores certain amount of defense and resistance and therefore hits really hard.
- Hayate increases CD of enemy´s mystery and causes interruption which can prevent mystery from being used (even in following round eventually)
- Hayate buffs Kotetsu´s damage by 40% vs. immune to debuffs enemies (another 40% is not applied, because this team cannot suppress super armor)
- Chiriku provides nice defense debuff and his chase removes buffs and shields. This team´s chase chain starting from Kotetsu´s mystery, therefore removes buffs nearly at the beginning of entire chain, avoiding any shields and damaging enemy hardly.
- Water Main uses poison tai to waste enemy mirror (if there is any), so Chiriku can control chased ninja. Heals and cleanse from mystery and standard attack is always welcomed and extra 50% healing due to passive can be life saver. Due to many chases entire enemy team will receive poison most likely more than 2 stacks of poison (if not immune to debuffs).
On Kotetsu´s mystery, team does up to 14 chases by round 5.

Team Scaredy´Cat (Water main, Hiashi Hyuga, Shikamaru, Kurenai)
- Water main uses Shark bomb with Experimental ninjutsu and neurotoxin passives for control mystery spam and small scaling thanks to Exp. Ninjutsu. Uses chakra blade chase to get 100% chance to apply chaos.
- Healing standard partly negates negative effect of passive and helps team sustain.
- Team uses Monkey King summon to connect chase to Hiashi for directed accupunture.
- Hiashi c*e mystery twice in the 1st round, greatly increasing his evasion to protect himself and his team from middle and bottom row attacks, while dealing nice damage on every evasion.
- Shikamaru can generate 20 chakra twice thanks to his passive, which leads (with Hiashi´s help) to directed 2 accupuntures and 1 immobile in the 1st round. With any chase proc on standards from either Shikamaru or Kurenai, there is another Chaos / Immobile / Accupuncture control combo in chased target, providing solid advantage in 2nd round.
- Kurenai provides mirror to prevent reflect on chaos or other control, Shield / Heal / Cleanse in case of emergency.
This team has huge focus on control, but suffers mostly from dodge as it can interrupt and steal chakra. However immunity to debuffs ruins the idea of full control. 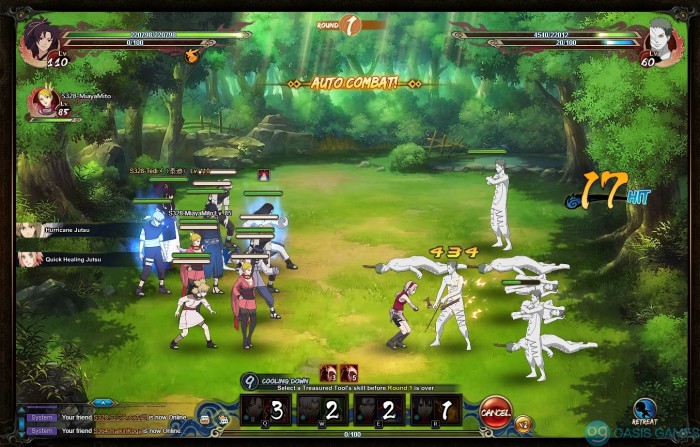 The best way to fight with your enemies, is to know the potential of your line up and team composition.

Fire Main- Protecting your Team from Debuffs by making it Immune during the Round, it also Control Enemies by Sleep, He will also Provide 40% Combo Rate and Ninjutsu Increase for Secret Jutsu User Like Neji and Izuna Uchicha and himself. It gives additional Chakra for Team Mystery Casting.

Neji - He is our tank capable of Dodging Enemies Standard Attack and Causes Acupuncture that Prevents enemies from doing Mystery Skill.

Izuna Uchicha-Our Main Damage capable of Igniting Enemies by preventing enemy Heals and a Sleep Controlling Enemies. He will also provide 30% Ninjutsu increase to himself.

Kabuto- Provide Healing Jutsu to allies and Disperse Debuff, he is also capable of providing Dead Souls which do Standard Attacks.

Wind Main-She's the Main Damager of this Team, using the Giant Rasengan and Producing Clones per Round which Affects Mystery Cooldown when Existing. She is also giving 40% boost to all Wind Attribute Ninjas like Temari. Her passive "Queen Momentum" gives her an additional Ninjutsu and Attack 25% for every Female present in the team (Hinata,Temari, Sakura) which roughly converted to 75% Attack and Ninjutsu boost. The activation of her successful chase gives her an additional Extra Standard Attack.

Hinata- She is the tank of the team, her mystery provides a self evasion from standard attack, capable of deflecting enemies standard attack. She also provides Acupuncture when doing successful Chase during team battle.

Temari- Provide a Potential High Damage when Life is Full.

Sakura-Provide a Healing Jutsu, Survivability of the Team and Dispersing Enemies Debuff.

The First Team which is know as Fire and Secret Jutsu User were effective in dealing High Damage to the Enemies because of its Fire Main Passive Enhancement, it also provide Ignition to the enemy which blocks potential enemy Heals. It is also effective on Controlling Enemies through Acupuncture that disable Mystery casting and Sleep that Disable enemies from performing potential actions. Our Kabuto provide Support and Survivability during Battle by Healing Allies and Dispersing Debuff. Overall, this team showcase a Team Effectiveness by means of Damage, Control and Survivability.

My Partner's Team which is known as Wind Style Enhancement were effective on dealing High Damage to the Enemies from Wind Main Enhancement Passive and her Queen Momentum. Her Producing Clone Standard Attack protects our line up from Enemies Standard Attack. This team also is effective on Controlling Enemies through Acupuncture which disable Enemies from casting Mystery. Our Sakura also provide Support and Survivability during Battle by Healing our Allies and Dispersing Potential Debuff. Overall, this team showcase a Girl Power Effectiveness by means of Providing High Potential Damage, Control and Survivability.

"WE CANNOT ABANDON OUR FRIEND, WE HAVE TO GET HIM BACK NO MATTER WHAT IT TAKES AND THAT'S OUR NINJA WAY!" 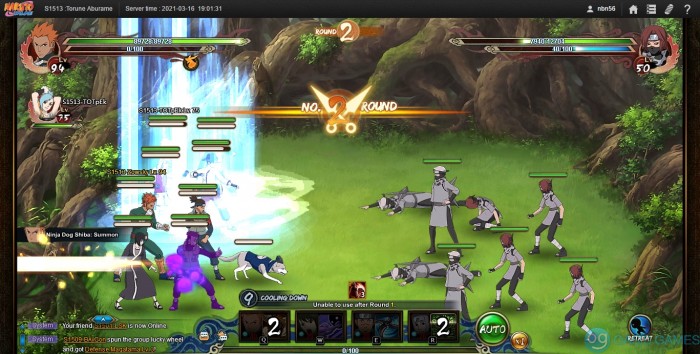 Finally, my beloved friend came back to this game again, so I have to always help him to keep playing this game, by helping to level up his ninja by fighting NPC, because he use water main so I support him by using Yamato for giving a barrier to increase water and earth damage by 40%, shizune to increase healing by 25%, and he use konoha ninja so i use iruka increase ninjutsu and attack by 30%, and don't forget that as the earth main, I give a shield of 40% ba 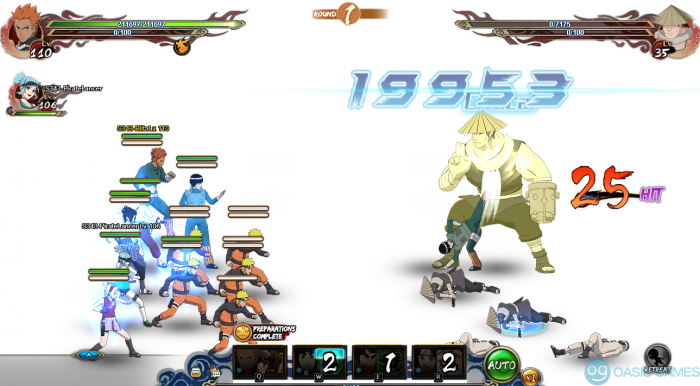 Hidden Mist ninjas have infiltrated the village with their secret weapon, Lord Hokage has dispatched two teams to take care of the enemies. My team specializes in fast and deadly Taijutsu with a barrage of utility support. My partner's team consists of a balanced team, one to distract the opponents with his multiple clones, one to have multiple target attacks, and the others being support to heal any injuries that may occur in the battlefield.

As a team, Lee, Guy, and Crimson deal heavy damage to a single unit, swiftly dispatching any opponent that comes our way. Tenten in the backline provides us with long-range support if we so happen to encounter long-range style combatants.

My partner's team comes in as secondary support. Naruto would make multiple shadow clones, distracting the opponents and misguiding them on who to attack. Sasuke in the back would prepare his deadly ninjutsu skills to wipe out the entire field in a single strike. Meanwhile, Azure and Sakura stay behind, healing injuries taken during battle and providing chakra to their teammates.

How this team will help bring back my beloved friend back in Konoha:

As we fight our opponents, my friend would be able to see Lee's swift attacks and remember Lee's fight scene with Gaara when he first showed his true capabilities when he used the 3rd Gate. Tenten's massive array of weapons being summoned from her scrolls using space-time ninjutsu would make my friend remember her Twin Dragon Scroll scene in the Chunin exams. Guy giving his thumbs up approval when his buff triggers, to remember his numerous funny scenes where he does give the "thumbs up". I asked my partner to use the original Team 7, so as to remember the times we spent watching Naruto throughout his journey and watching him grow. When Naruto first used his multiple shadow clone jutsu against Mizuki, or when Sasuke first released "Kirin". These would surely bring back good memories and help my friend come back to Konoha and play with me again.

Oh and Sakura is there for the meme.