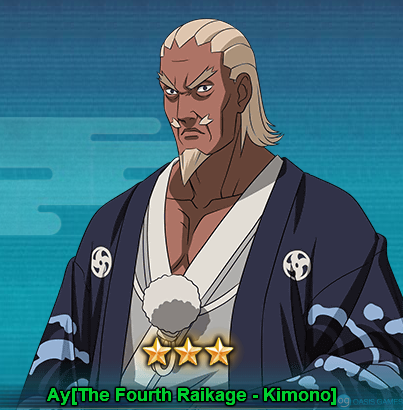 Mystery: A strong mystery but it hits only one target (+splash damage so if you want to damage most of the team you'll have a limited choice of targets to use it on)

Chase: Every chase ignoring some def/res is really strong. Also it does immobile so that's great

Passive 1: Kinda a support style passive, could be useful

Passive 2: This is why it's best to pair Ay with kumogakure (hidden cloud) or GNW ninjas

So his skill set is something that I personally don't like because when you look at his mystery,attack and chase you expect a really great pos1 dps ninja but then both passive 1 and 2 are support style which doesn't make much sense. If he had some 1% atk/nin bonus per chakra or bonus attacks he could've been a beast

Overall he is still usable, feel free to experiment and have fun