Hoho! The village's Christmas Party is about to come soon and the Hokage is wondering what its gonna happen and what you guys will look like. Now is the time to show what you got for the incoming party. Good luck Ninjas, dattebayo!

- This event will be divided in two categories, the Art Making Event and Create your own Christmas Themed Ninja.

In the Art Making Event, participants must create an artwork that shows Naruto and his friends preparing for Christmas Celebration (it can be showing Naruto and his friends performing Carols or anything depending on your own concept as long as it is related to the theme). The artwork should be an original piece, traditional or digital is okay. Any entry that is copied or downloaded from any image sharing site will be disqualified automatically. 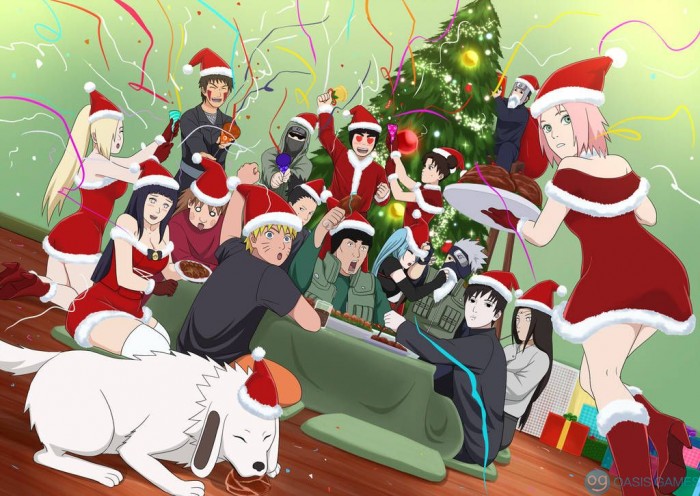 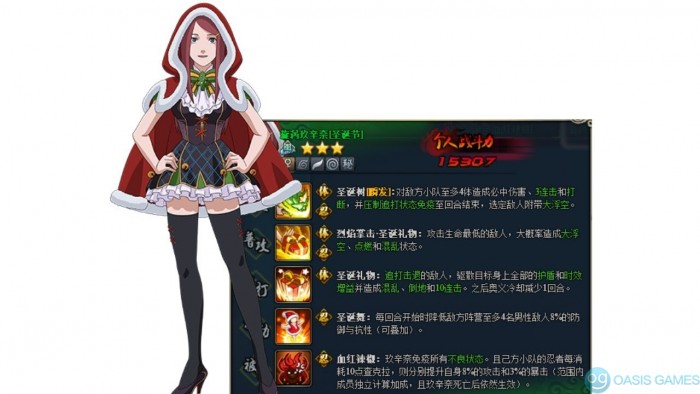 If you have any question about the event, please send me a private message instead of posting it in the thread! 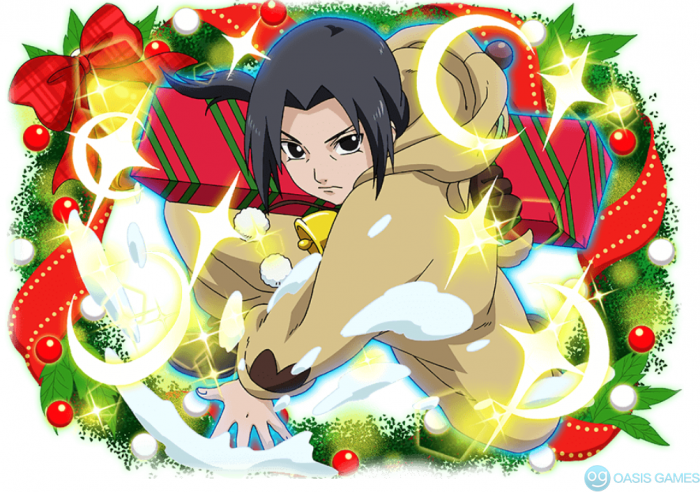 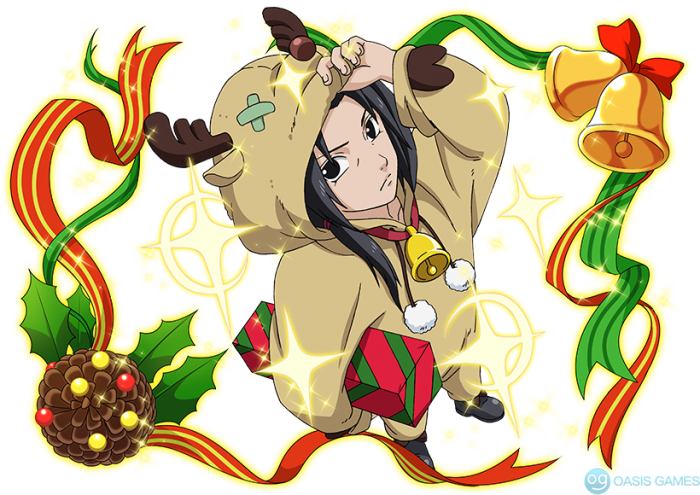 Standard: Extra Gifts: give a random Konoha unit from your team a gift that gives (extra standard attack or extra chase or clear all debuff) for 1 round (can stack with the same unit).

Chase: Snowball Jutsu: Triggered with at least 20 Combo, causes damage and ignition to 2 random units in the lineup. and gain an extra standard attack.

Passive 1: Jingle Bells: at the beginning of each round Itachi heal himself ba

Passive 2: Merry Christmas: for every Konoha ninja in your lineup your team gains an extra 10% attack and ninjutsu for 5 rounds.

Create your own Christmas Themed Ninja 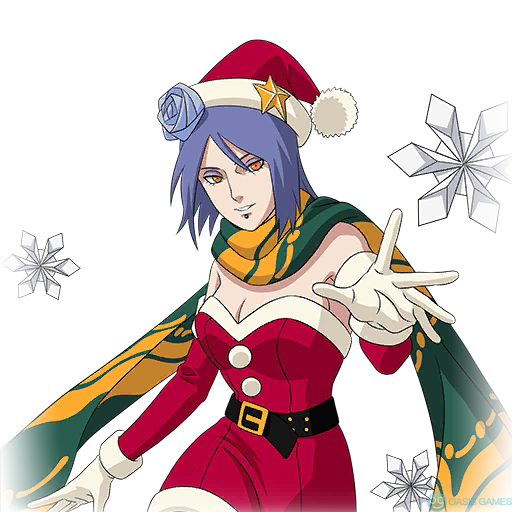 Mystery: Dance of the Shikigami: Present Assault [Prompt]: Deals damage, 5 Combo and Ignition for 3 rounds to all units in the lineup. The selected ninja will suffer from Suppress Immunity until the end of the next round, Immobile and Death Possession for 3 rounds. If the selected unit is a unit in the ally field, generates a Shield ba

Standard: Colorful Paper Shuriken: Attacks up to 5 units in the opponent's field with 3 Combo and a chance of causing either Acupuncture, Blindness, Tag or Ignition for 2 rounds to the units hit.

Chase: Dance of the Shikigami: Paper Chakram: Chases and Attacks a Knocked Down unit, causes Repulse, 10 Combo, Immobile and increases that unit's Mystery cooldown by 1. Can be triggered 2 times per round.

Passive 2: Strong Spirit of the Holiday: Konan is immune to Pure Taijutsu damage. Additionally, at the beginning of each round, all Akatsuki units in your lineup will have all their Debuffs canceled and receive a 15% increase of Ninjutsu and Resistance (stackable to up to 5 times), while decreasing 7% Ninjutsu and Resistance to up to 4 random ninjas in the opponent's lineup (stackable). This skill will still be active even when Konan is currently suffering from control Debuffs. 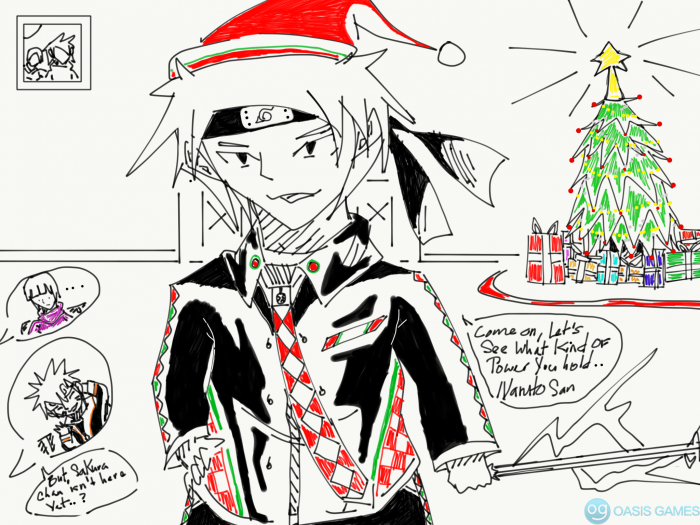 Merry Christmas To All And Let's Welcome In The New Year Together, Guys

I participated in : Create your own Christmas Themed Ninja
Before i start i want to say merry christmas for all of you and naruto online and thank you mods for giving us the opportunity to participate in your generous forum games .

Mystery: Infinite Tsukuyomi christmas fortune prompt :launch a barrier that lasts 1 round and it will prevent both ally and enemy team from using standard attacks and mysteries ( chases are allowed ) when it comes to attacking phase each ninja from the ally team will roll a dice ( if its heads he gets to use standard attack if its tails cause paralyize for 2 rounds to the unit with the misfortune ) and when it comes to the enemy team attacking phase each ninja will roll a dice ( if its heads he get to use 1 attack cost him -10 chakara drain and if its tails cause empriosn debuff for 2 rounds ) this skill cannot be canceled ,

Standard: Susano'o jingle bell : summon susano giant jingle bell causes all enemy team units paralyze and reduce their critical hit by 45% ( not stackable ) while causing them slight dmg ( if the unit that got hit is immune to debuff give +1 standard attack for another random konoha unit in ur lineup ' stackable ' 'max is 4 attacks granted ' ) .

Chase: Kamui christmas dimension : chase and attack low float enemy cause knock down , units affected by this skill will have their mystery colldown increased by 1 for each 10 chakara the enemy team have , causing irremovable ignite for 2 rounds , units defeated by the burn of this chase will revive on ur side as a clone with 40% ba.

Chase 2 : Gift storm ; triggers with at least 10 combos summon heavy gift boxes that cause dmg to 4 enemy units and causes immobile to a random enemy unit

Passive 1: Big daddy santa : this unit is immune to low float hight float knock down repulse additionaly this unit reflects 1 debuff for each konoha unit in ur line up evrey round .

Passive 2: At your service : at the beginning of evrey round madara choses 2 random konoha units on the field and increase their ninjutsu / attack by 60% .

Create your own themed ninja 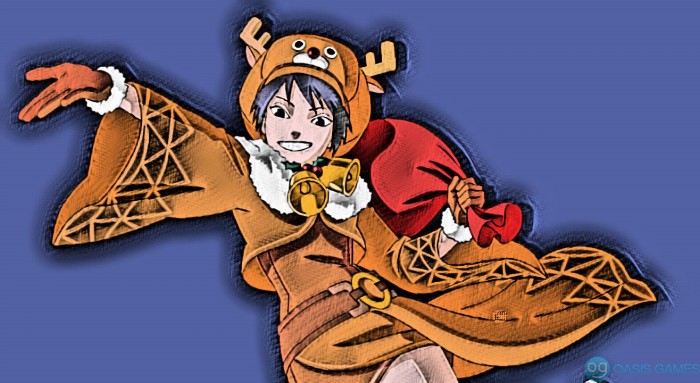 Chase:Quicklime Jutsu- Triggered with at least 22-combo, will cause undodgeable damage, slow and 6-combo to two random enemy.

Chase:Dance Of Festival- At the beginning of the round two random enemy will have new buffs and last until the end of the round and cannot be remove.

Passive: Christmas Celebration- If kurotsuchi is on the feild for every usage of 20 chakra the ninja will have an increase on iinitiative and resistance by 1% but if kurotsuchi is defeated this skill will not work.

Thank you i hope you will appreciate my work 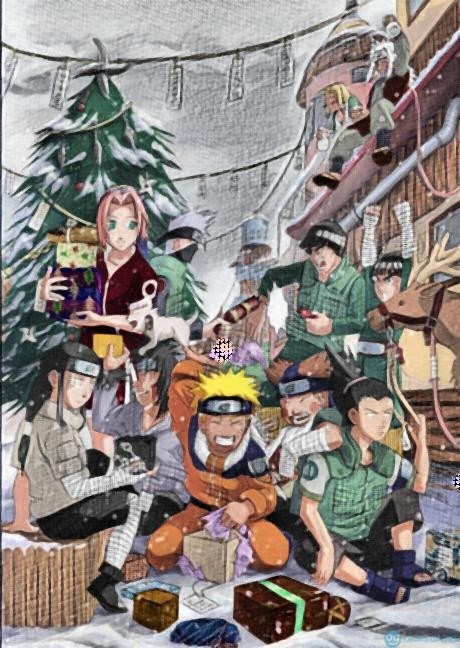 Special thanks to: Pokemon Emerald

Mystery: Selected ninja will join Lord Jashin. Supress all imun ninja on the field for 3 round

Standard: attack a ninja on front of him, make all ninjas under tag

Passive 1: when hidan on the field, all ninjas from both can't get additional standar attack

Passive 2: when hidan on the field, all ninja from both can't dodge any attack 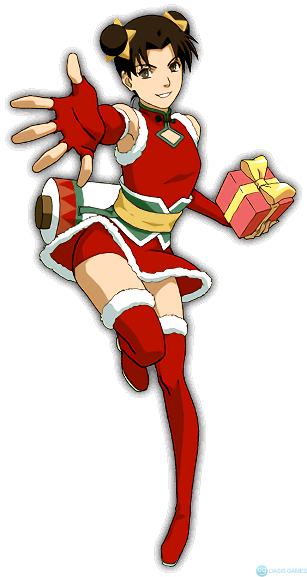 Standard:Snow Angel: Create a Snow Angel which removes 2 Debuff on Tenten (Tenten can perfom this attack even when immobilozed..) 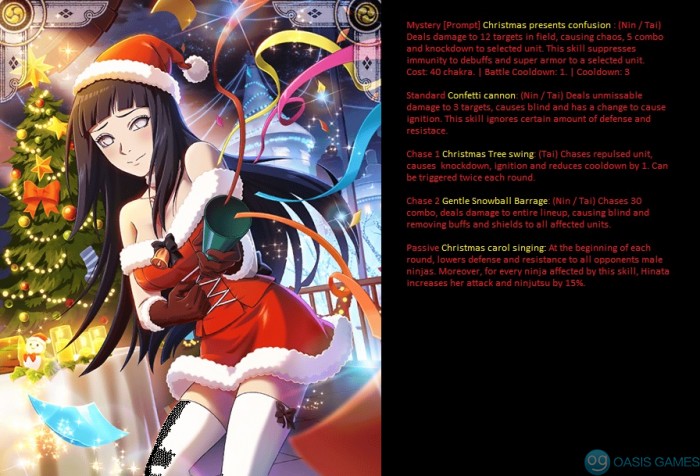 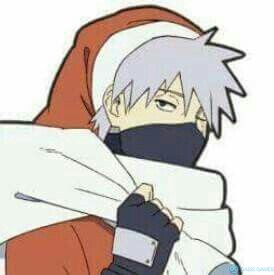 Mystery: Dog Party - (tai) (nin) [PROMPT] Summons an army of dogs that run over the whole enemy team, causing knockdown and immobile to the selected unit .

Standard: Wild Gift - (nin) 2-3 units on your team will enter "excited mode" that last for 1 round OR given a critical rate increase by 15% (stackable).

Chase: Kamui - (nin) Chases and attacks a repulse unit causing knockdown. This skill also removes all shields/buffs and can be triggered twice.

Passive: Charm - (nin) Kakashi is immune to debuffs. Whenever he is attacked, the attacker will have his/her defense / resistance lowered by 8%

Mystery: Demonic Illusion: Toad Confrontation Chant [Prompt]: Cause unavoidable damage to the selected unit and cause irremovable immobile for 2 rounds which can bypass immunity or immunity LVL 2 status.

Standard: Christmas Ransengan: Cause damage to 3 random units, high chance of causing repulse to a random unit, and suppression of super armor until the end of the round.

Chase: Christmas frog bind: Chases and attack a knockdown unit cause low float and irremovable immobile for 1 round.

Passive 1: Christmas frog kata: At the beginning of each round sage units in the lineup will have their injury increase by 30% and get an extra standard attack.

Passive 2: Christmas Sage mode: This ninja is immune to debuffs. Whenever a sage Jutsu user uses his mystery he/she will reduce enemies hit injury by 5%(stackable) and this effect cannot be removed.

Mystery- Unleasing the spirit of konoha

Launches a barrier "Christmas training field" While this barrier exists, all konoha ninjas will gain a extra standard attack, and heal 25% of the damage they deal while increasing mystery damage by 40%. Also activates explosive mode for 1 round.

Rock lee kicks presents at 4 enemies, and reduces their defense and resistance by 5% (Stackable 5 times)

Chase- The parties not over yet

Rock lee unleashes his reindeer, Chases 10 combo, and all konoha ninjas gain another standard attack(can stack with the barrier)

Passive 1- Its time to train 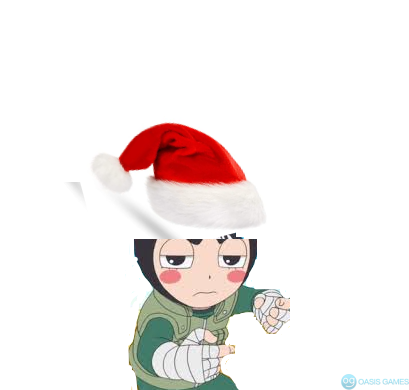 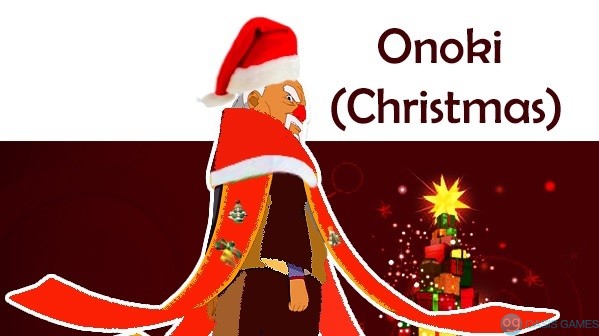 Mystery: Christmas Buffet Feast: Causes Huge Ninjustsu Damage up to 9 Units of the Opponents Field and causes Enfeeble and No Cheat Status to a selected Unit and Causes Knowdown.

Standarad : Christmas Bag Attack: Attacks a random enemy with a lowest health and causes Ignition and Interruption, and high chance of causing Repulse.

Passive 1: Christmas Boulder Barrier : Activates a Barrier and removing Shields and Buffs from both sides. While this barrier is in effect, increase Ninjutsu and Attack by 40% for all ninjas with Earth, Fire and Wind Attributes from your team.

Passive 2: Christmas Exchange Gift : Onoki is Immune to Debuffs, and every beginning of the round heal himself for 40% of Ninjutsu , remove Debuff to random ally and gives one extra standard attack.

Chase: Poisons the opponent by supporting all kinds of attacks with venomous snakes

Passive 2: I'm not dead: If Orochimaru dies, the next round takes half of his teammate's health and resurrects. If there are support characters in the team, it primarily turns to supports.

My English is not very good. sorry 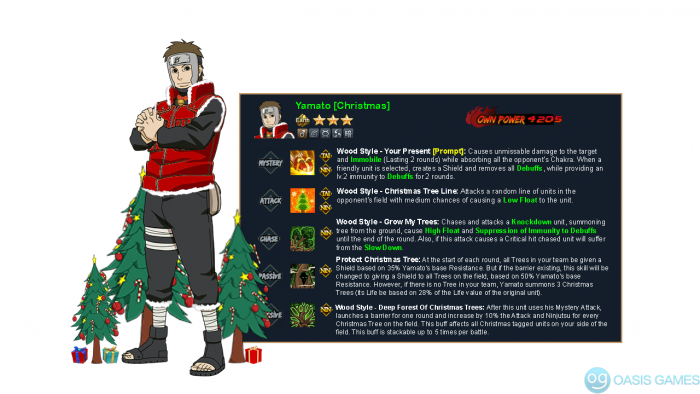 Mystery: Wood Style - Your Present [Prompt]: Causes unmissable damage to the target and Immobile (Lasting 2 rounds) while absorbing all the opponent's Chakra. When a friendly unit is selected, creates a Shield and removes all Debuffs, while providing an lvl2 immunity to Debuffs for 2 rounds.

Standard: Wood Style - Christmas Tree Line: Attacks a random line of units in the opponent's field with medium chances of causing a Low Float to the unit.

Chase: Wood Style - Grow My Tree: Chases and attacks a Knockdown unit, summoning tree from the ground, cause High Float and Suppression of Immunity to Debuffs until the end of the round. Also, if this attack causes a Critical hit chased unit will suffer from the Slow Down.

Passive: Wood Style - Protect Christmas Tree: At the start of each round, all Trees in your team be given a Shield ba

FOR THE ARTWORK EVENT 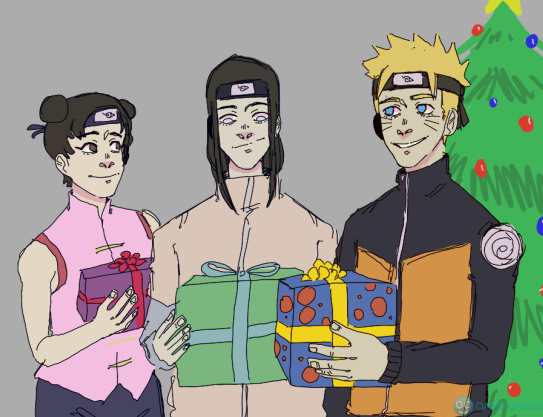 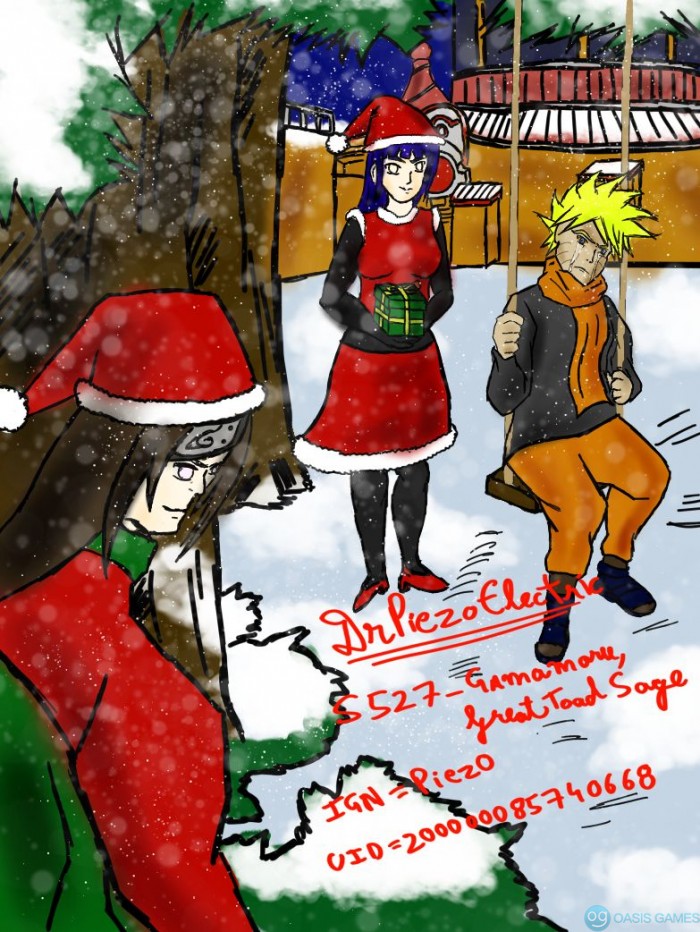 [Will Hinata be able to confess her feelings to Naruto and fill the hole in his heart? Or will she run away at the last moment from her shyness? Oh, who's that stranger in the distant bushes? Is it the guardian angel of the Hyuga?] 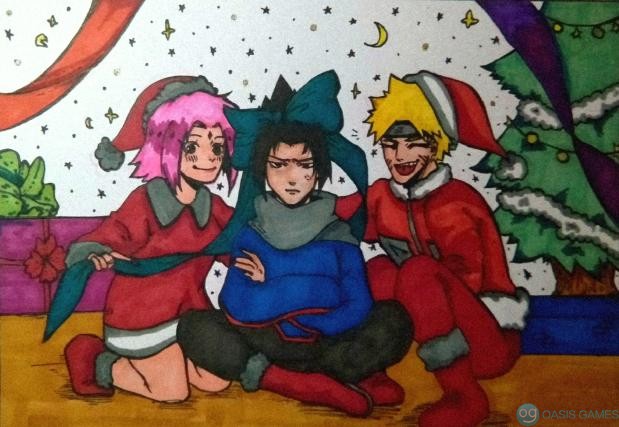