i know its nobody's problem, but i just wanted to share myexperience, and i wanted to ask u about my problem

so,, i kicked from the group cuz i just wanted the equality between leader and member, strong and weak

Its all started cuz my leader always get the legendary pack, and the strong always got the pack, Theres no fairness in pack distribution. The others member is too scared to ask then i ask him and speak up, and the group leader kicked me out.

So i asked u, am I wrong for desiring equality in pack distribution?

Some players said "its just a pack", yeah its a pack but for some free players, we need it! 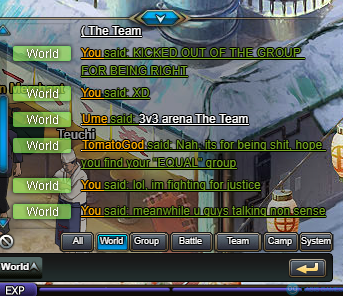 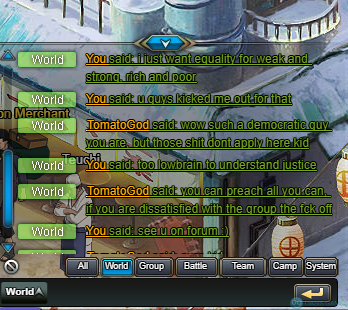 that tomato guy prolly just some 7yo kid doenst know *. Its funny how that guy called you a kid when he's the kid xDD

thats exactly what i said to him

Repost this in general discussion and in bug support do a double post,noone will see it here man and you can get help

Wow the audacity of this guy, you can actually work as a scammer ba

I am from the same group as that guy named Lanaya (the author of this thread), I may not be part of the group's upper echelon but I was there when the argument happened.

The group leader did not kick you out, Rex (Group leader) actually left from the group because of how hurt he was because your toxicity, you made him feel like he does not do * to deserve the packs he is getting for himself. When from my perspective it is well deserved since he works his ass off and helps everyone in everything when he can, and I bet most leader make their group in order to secure a pack for themselves which is nothing wrong at all.

You were told off by Assasimora (Anbu position in group) to tone it down and cut you off since you were being a bit aggressive in your statements, then you started calling him out calling him an idiot with too low IQ to understand your argument, IN FACT you called everyone dumb for not understanding your point according to you.

You were being told to calm down since you are trying to actually escalate things which could be done in a simple calm manner of talking, instead even going as far as instigating other players in the group to oust the leader for the packs he is getting, Even KidoUchiha (Group Senior) tried to talk to you calmly but you repeatedly told him that he should shut the frick up because he is a top uppper and he does not understand your struggle of wanting a legendary pack. TomatoGod (Group Senior) also tried to reason with you calmly this was also the time the Group leader REX left the group because he can't handle your bantering, and you will not even listen to reason.

The hell are you to say that everyone was unsatisfied of the pack distribution? you were the only one who kept saying that while the others and myself kept on saying that we do not think the same, everyone knows that whoever gets the legendary packs deserved it and leader actually tries to distribute evenly, and its not like you never got any for the past weeks either, AND THE SERVER IS THREE WEEKS OLD, what were you expecting to circulate 3 legendary packs on 50+ players in the group?

The Group upper echelons are very close, and TomatoGod upon learning that Rex left the group because of how you spent 30 minutes of everyone's lives talking how he did not deserve the legendary packs that he is getting when he has the most contributions since day one became really furious and responded to your toxicity with his own, it might not have been the right thing to do but I was actually surprise it took long enough for them to snap back at you. The moment you got kicked is when you challenged TomatoGod and you said "Tomato you are testing my patience" (Sorry can't provide ss of conversation) and he snapped booting you out of the group immediately.

1. You kept talking for 30 mins straight without even hearing reasons from others

2. You called most of us Dumb, an Idiot and * for not being able to comprehend your argument, even going as far as referring to them as uneducated.

that was all actually, and you even brought it out in the world chat, not surprised why you did not screenshot ALL of the conversation as well as the Group conversation and only captured the moment Tomato cursed at you. Cunning of you but you are too dumb to think that no one from the group would actually call you out on it. You even threatened of posting in forum of the injustice you were given when from my perspective it was well deserved.

A WORD OF ADVICE

If the Majority of the group thinks you were very toxic and deserved to be kicked out due to inappropriate approaches, and you still think you were in the right, you need help, go see a doctor :)

I am so sorry if I cannot provide any substantial evidence since this happened a few days ago, but I can call on all the group to grace this post their presence and validate my whole account of what happened I would gladly do so if someone wished it.

Please do not embarrass yourself further, I do not want to actually put someone to shame even if they were in the wrong but this post just struck my nerve so much that I typed this long * that I am not even used to.

You don't have to, like I said this happened only a few days back and he announced to make a forum post about it, so I checked it out and made an account to reply because I cant really respond if I don't have one now can I? and if you actually read, I am down to call out most if not all of the group member to give this thread a glance and reply if they could.

Exactly our point, the server was too young to actually see a pattern where everybody gets a pack, and we all accept that the leader gets the legendary pack always because he deserves it ba

Personally, I don't see what the argument's about?

Just because you want a pack doesn't mean you can get it dude. When I was new to my group ( about 7 months ago ), I faced the same issue. Altho, I didn't be such a jackass about it and decided to earn my position. I donated every day, participated in all gnw's and helped out as much as I could. Fast forward to 7 months later, I became an anbu and regularly receive packs ( still not always ). Thats how you should go about it rather than whining and being such a crybaby.

1st of all im just asking rex about why he always get the legend pack, then he said cuz he got that cuz he's the leader, i mean ok u are the group leader, i get it, but does that mean group leader always get the legend pack and other members cant get it?. And then he left the group cuz he want to play victim, so other members will feel bad for him, while i do to him is just asking a question

2nd asisan did not trying to calm me down, cuz he called me an idiot, then i started become toxic cuz he being toxic to me 1st by cutting off my conversation and calling me an idiot. I'm just asking at 1st, i said that when i ask rex why he always get the legend pack non

4th, he literaly gets the pack every week and hows that evenly?. And he got 3 packs, and he can give 1 out of 3 to other members?.

The Reason why i keep talking for 30 mins is cuz they always cutting my conversation and talking * to me so they did the offense not me, im just asking a question, meanwhile they talking *.

I didnt called them dumb or idiot, i inferred low brain, cuz he keeps calling me idiot, all i do was asking a question

Well, i cant screenshot the whole conversation cuz most of them drowned and i didnt thought to screenshot from beginning, like i said, im just asking at 1st. I didnt threatened them, i just said "see u on forum", how is that threatening?. And yeah im miswrite, its not rex who kicked me but Tomato did but he's the group's leader since rex leave

is it wrong to ask?

rex didnt said he got the packs cuz he the leader, Asisan did

I'm the group leader from S360 - OumiNoGakure and in our Group the Pack Distribution will always be about everyones GNW activity and not how much power anyone has. If someone misbehaves or harrases other memers of my group that is not an GNW issue and will therefor not be treated as one. We have a set system that rewards players ba

I understand that you want fairness, but to be honest who knows who is telling the truth. In my opinion, if they were taking the packs for their own selfish reasons, then i'm sorry and just make a new group or join a different group. Or if you were the one who was started all of the toxicity, then that's why you haven't been getting packs and i support the leader/seniors that kicked you out. To be honest, either way, if you don't like how the group is being run then leave it, technically you were kicked out so just join another group or make one. Also another word of advice, don't be toxic (not saying you were but if you are..) literally i would stay on other players good terms because you'll get h*ll if you make enemies with other players. Anyways, i hope things work out. Have a great new year and holidays.

Groups are basically dictatorships, if you don't like what the leader does, you c*ways leave and join another group or create your own