In my time on the forums I've seen a bunch of people post about how they hate when people use ninjas like BT Kushina, Edo Minato, Kakuzu. They say it's lazy to use these ninja, it doesn't require any strategy and it's just an auto-win if you have them. Basically people don't like the centralization of the me

So anyway I want to know, from the people who always complain about me

I'll start. I like the idea of teams with BT Edo Tobirama. I think he has potential but he's not really me 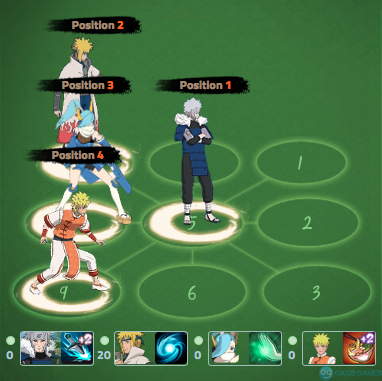 Imagine Tobirama's skills are +2 mystery, +2 standard, Y+1 chase, and +2 for both passives. Ramen Naruto would have all BT +2 except the passive (Y+2).

hmm, you gotta be a Tobirama lover to really choose him over Minato on P1. not bad actually imo XD

edo tobi got shafted so hard here, breaks too late and we still dont have the one that makes his tag affect immune characters. I would love to finally be able to run him but unfortunately at the moment even fully sb his only use is for his barrier and even that is undone very frequently with all the gaara's and edo release madaras

in the age of minato and naruto ronin this was peak, still works but more people hit ninjutsu nowadays

combo might be broken cuz the side was half-broken

Oh *, I didn't know he didn't have the Y bt that goes through immunity. The team I posted is kinda null then, I was counting on that. There's already other ninja out whose BT skills can go through immunity so I don't see why they can't release that for him. Also to the other poster, I'm not a big fan of Tobirama at all, I just think about the ninjas for their potential skills not so much for the character they are lol.