*Midnight wokes up, and he was on Konoha's hospital. He started to walk, watching some people with daggers of stones stabbed on their bodies.*

*He was watching some X-Ray pictures from the bones of the people, having Stone's daggers even stabbed in their bones*

*He started to walk, and he found Kurenai layed on a bed, with her leg, stabbed with Stone's daggers*

Midnight: ... Crimson made you this?

Kurenai: Yes... you thought that anyone would sacrifice you... for our sake...? We're a family... we take care of ourselves.

Kurenai *picks his hand*: No one here blames you about what happened.

Kurenai: You're not... one of those... horrible bioterrorists that goes killing coldblooded...

Midnight: ... I'm going to save everyone... starting with you... *stands up and kisses her forehead*

*After some walking, Midnight found Kakashi. He approached and hugged him*

Kakashi: Midnight, bro...! Thanks to gods that you're awaken!

Midnight: ... Some stones on my legs? *smirk* You'll need more than that.

Midnight: Hmpf, it seems so.

Kakashi: ... Listen, I've found the answer about how to take off those daggers from the bones. It must go away from the same way that they've appeared.

Midnight: ... that means that we don't need Crimson... we need his power.

Midnight: I'm a freaking sponge of power... If I have Smoke, why not Stone? *smirks and touches Kakashi's shoulder*

Kakashi: Y-Yes, but what if Smoke it wasn't a coincidence? You have to go inside and beat... idk... millions of people from DUP to arrive to him.

Midnight: It's because of me that we're living this nightmare... and I'm going to resolve everything.

Kakashi: Well, and what you're going to do?

Midnight: I'll explain you into the van *goes outside*

*Some minutes later, Kakashi and Midnight were going to another town, where it was Crimson and his entire DUP army*

Midnight: Well, I have everything on mind. We'll go walking into the streets, we'll have some good food on the cafes, we'll be saving my Conduits comrades... we'll be walking on the entire city like heroes.

Midnight: ... What does that means?

Kakashi: It means that this city have a high percentage of people who hates living with bioterrorists. I don't blame them... the bioterrorists are horrible.

Midnight: Yes, but I'm not going to be like them! I'm going to save lives! I'll be like Hagoromo, or whatever.

Kakashi: ... Shooting Smoke bullets from your fingers are not "normal".

Midnight: Being "not-normal" it doesn't means that I need a cure, okay?! Hagoromo it wasn't "normal", Hamura it wasn't neither.

Kakashi: Yes, but people didn't fear Hagoromo and Hamura, okay? The people never saw something like bioterrorists, and I don't blame them. They're monsters.

*Both went off from the van, and they saw some huge walls made of Stone. Not only that, there was some lines of "light" or something, marking the territory of anyone*

Kakashi: Well, if you're planning to return home, I'm completely agreed with you, ok-?

Midnight: No, we're going to walk until the city.

Kakashi: Uh, "this" is destruction.

Midnight: "This" is self defense, they built the barriers from preventing the Conduit's attacks.

Kakashi: Uh... duh... they're bioterrorists, they have powers.

*Walking a bit, Midnight saw something like this. A little car with some "torches" with a weird energy* 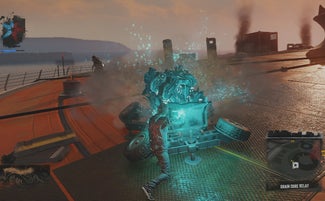 Midnight: What is th-?

*Suddenly, a piece of that energy striked Midnight, going inside of his body, and after that, all the entire energy went inside of his body. Midnight started to levitate and have some "visions" of his new power*

Midnight: Gah...! *falls to the floor and stands up again*

*A little drone with a little stone with that energy, was flying close to them, but Midnight destroyed it with his new trick (the Smoke Shot)*

Kakashi: Midnight, this didn't got "better"! We're trying to resolve your problems, not add more!

Midnight: Do you really think that Crimson is waiting for us in his chair?! I need to recharge my energy if I'm planning to face the "Hard Guy".

Kakashi: HEY! I hope not to arrive into that conclussion! ... Listen, I have some contacts on that town and-

Midnight: NO no no no no no! This isn't the moment that "Kakashi appears and makes everything get better"! This is MY problem, and I'm going to resolve this by MYSELF!

Midnight: Oh, you want to act like a hero? Go and save that woman.