Is he really so weak even with his skill trial? His problem looks like to be lack of damage from what i saw in others topics about him. I am asking because i am really close to 4* him and it looks like i have made a big mistake in choosing him.

He is great with his BTs he just need some good support, ppl always whine about dmg but is a good strategy that wins u a fight besides he can spam his mystery every round if played right.

i have sasuke .. with his sb full .. sasuke doesn't need help from attribute damage at all .. use Samehada 2pos .. mid nighblade gaara kazekage ... i show you in the image .. now the power is distributed as follows way .. 90k sasuke ... 60k mid nightblade 50k damehada 50k .... gaara ... samehada provided chakra in second position you would acquire chakra for your sasuke given that gaara to have a 50k of power if you have chakra gaara will be immortal it serves as support for all .. and can cancel camps that the enemy can produce. the warrior talent of your main character helps you resist .. in addition to healing you ... sasuke depends on chkra it is provided by samehada ... now the powers of sasuke concentrate at +2 ability always kills the support of your enemy bee asuma. provides extra damage to his allies .. I win everything at my level sometimes I win people up to 320k .. it goes .. I have 250k. focus the injury between sasuke and your main character 65% .. and. 35% always focus your damage on sasuke .. and control for sasuke .. do not use chakra recovery with confusion is rubbish .. use it as I show you.

Yeah this is pretty much right. If you don't get him scaled up with chakra in round 1 his damage in round 2 isn't that good but once you get his mystery spam going it's really strong. So yeah, sometimes the damage can be underwhelming if you don't have a team that generates chakra to scale him but if you do he's really great. For example, a team like this is well suited to Sasuke: 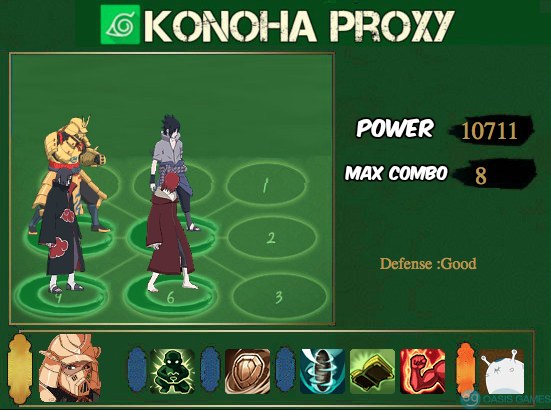 Like the other poster said, he needs the good supports (Nagato and Itachi are best with their BT too - or at least BT on Itachi's mystery so that it becomes prompt/immediate and costs 0 chakra, and Nagato's Y+1 Rinnegan immunity passive and Y+1 debuff reflect passive) but when you put him in a good team he will shine. So like, here, you can set up Itachi's barrier round 1 and then it will consistently give you 100 chakra for the next few rounds unless it gets overriden (but you can play smart and avoid that). Using Earth main's mystery will give you 40 chakra in round 1, and you also have the chance to get more with Nagato's standard that drains chakra. Then going into round 2, you will have a nice scale from Sasuke absorbing the previous round's chakra, and because of Itachi's barrier his cooldown will be 0. By round 3, he should be doing a lot of damage. And, if you keep shields on him he'll be immune to debuffs thanks to Nagato which is really nice.

Also...in terms of whether you should use the fear passive or the chaos one. I've tried them both, and personally I think chaos is better. At first, I thought fear was going to be super great and OP but in my experience it's really not. Sure it goes through immunity and prevents the attacker from getting shields or doing any standard attacks, but I've found that by the time the debuff gets applied to them, they've already done their standard so it doesn't matter, and most ninjas only do one standard.

Like, if you're fighting Kakuzu and he gets feared on the first standard attack he does, sure he can't do any more standards but he can still mystery, etc. Under chaos he can't do any of that. Chaosing a bunch of people on a team is really satisfying. Yeah it can be cleansed but often it isn't. Plus with the Chaos passive you absorb chakra and chakra is the most important thing for Sasuke teams.

Fear does have its place in usage, in theory it's good against ninjas like Ronin Naruto and Summer Kakashi who rely on their standard attacks to scale. But imo, Ronin is too uncommon right now to warrant it and chaos could also stop him. With Summer Kakashi...sure, but I see Summer Kakashi with Edo Minato so often and in my experience it's just really hard to win against Edo Minato with Rinneasuke even with BT. The elemental matchup is bad, Minato has all those dodges, etc.

I guess if the people in your server cluster are running more Summer Kakashis and Ronins than Kakuzus, go with fear. In my personal experience it was underwhelming. But, try both out and see which you prefer.

So, basically for him to work i need o good chakra source. Isn't even that hard to come up with the team that you suggested, it will take only a little it of time because the server i am on it is a a 3-4 month old and i don't have even 3 star gaara kazekage but this is not the problem. Thank you for your answer! Oh, and if you will still read this, can i use him with another main, like fire?

Thanks for you answer!!! I got it.

when using the ninja wizard you will have def / atk or ninjutsu / res .. to lightning attributes .. gaara protects itself only .. in fire I would read it well because there are some parts that do not fit

I will summarize why you should choose sasuke rinne ... if you have naruto six path. To anybody. most of the time you will lose .. because. the enemy will always use you minato or sometimes natuto six path .. kakashi summer .. what about this the enemy have someone who stops ability, you may or may not dodge you will forcibly lose your skill opportunity .. because if the enemy has Madara Edo or other ninjas who steal chakra or another ninja who also does it nunka you can perform your ability unless you paralyze them .. Sasuke has immunity to interruption you c*ways use ability (but I always recommend uploading your control to Sasuke all because he will be the one Define the battle in which you will be able to stop attacking standards after the ability .. since naruto when he performs his ability .. sometimes he will not be able to attack and be able to perform ability in the next turn .. this worked against immune or non-immune ... although your enemy have more initiative or less than you ... you c*ways take advantage of your attacks..and abilities..and sasuke does not need increased damage from another ninja.

How many protection/advanced protection runes you needed to fully breakthrough him ?

With so many using Kushina and Minato Edo, he isn't great. Really can't punch through Grudge defense without Kushina, Minato, or Bee damage scaling. I get more annoyed when I see him when using grudge, than fearing death because fight just takes longer. And don't really fear him at all with Minato or Bee teams. I could certainly see an argument for using him with Grudge, or other ninja as #2. I wouldn't say he is weak, but I wouldn't put him in the highest tier of ninja a F2P can get. He isn't "S" class, but probably A+ for F2P. If close to 4* means you are only 4 or 5 frags away, then I would go for it. But, if you are like 30 frags away, I might change gears and only grab his frags for free from events when something better isn't there.