sorta made a mistake um got kakashi summer and am using the lineup that I planned a week in advance, but it doesn't work too well the damage is fine lots of leech but I lose to much life losing Asuma buff and coming close to dying. 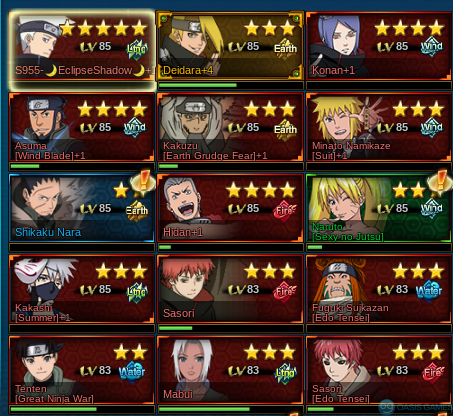 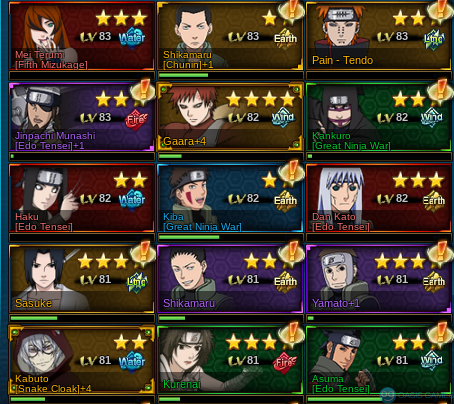 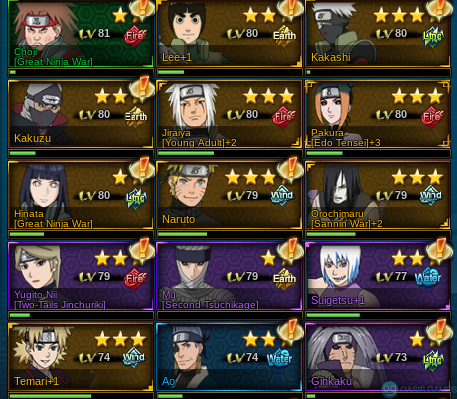 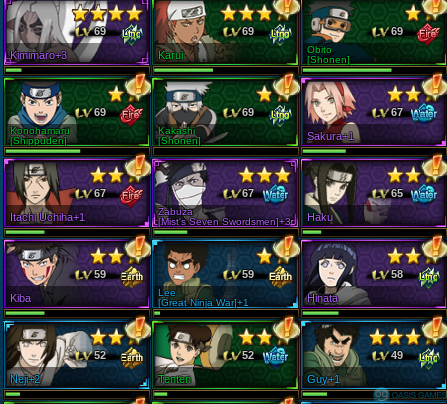 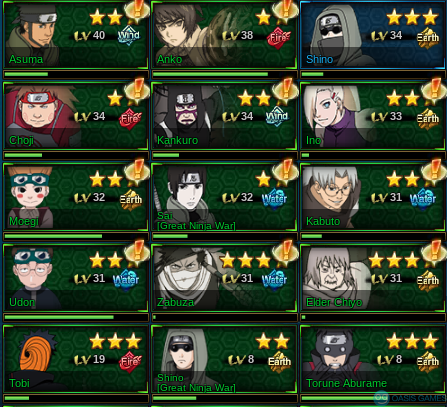 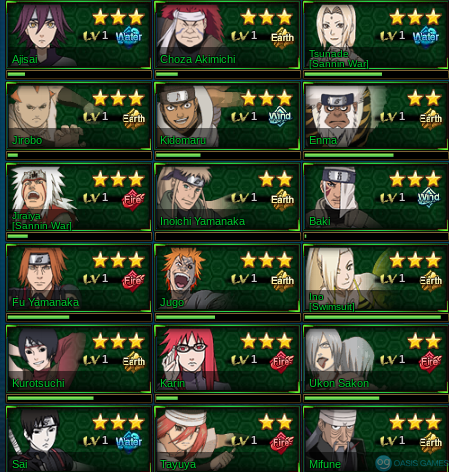 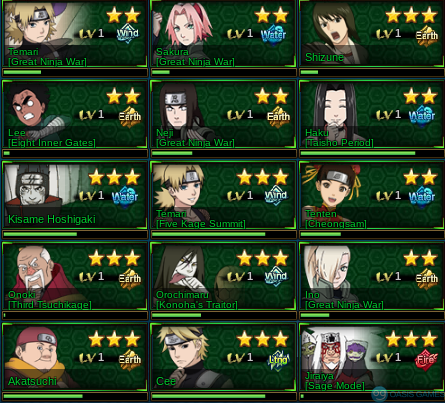 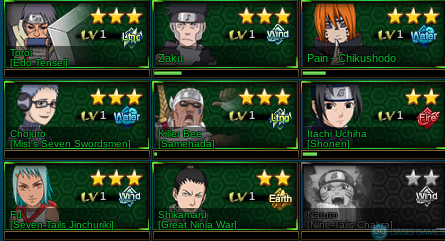 Don't have too many summons or ninjas but I am close to getting rhino summon and I want to get Iruka but im still lots of frag refine away from him.

Any help you can give me will make my day :D

you have Kakashi in a prime tank position. Kakashi decreases his own def and res. cover him with a nin who scales def/res or dodges. another solution would be to get shields or additional def/res through a buff.

I need Iruka i think shield and buff

BT Cee give 30% def and attack to lightning,and also heal.

Not bad ill try to get more frags of him

You can run Kakashi with Hidan if you already bt him, they chase each other so nicely. 4th pos can be someone else, Asuma should be fine tho if you leech + root.

In my opinion, it's more risky than it's worth to run WB Asuma with Summer Kakashi. In my experience using that Kakashi, a good deal of the time you're not going to be at or above 70% of your HP and then Asuma loses his biggest utility. Apart from the damage increase, you don't really need the rest of his kit on the team: his BT mystery supresses super armor, but Kakashi already does that. And you don't need the extra chakra that much - in fact, as chakra stealing ninjas become more widely used/distributed (Edo Nagato/Rinnesasuke /Edo release Madara) it can even be a liability.

Asuma works well with round 1 blitz ninjas like Halloween Kimimaro, Edo Hiruzen, EGF Kakuzu because they hit hard before the opponent has time to do much back. Kakashi by his nature is not quite like that. In order for him to scale with extra standards, the opponent has to use some mysteries...so, often you're going to take at least some damage (also I will note, I use Fire main's nin leech passive, so it's not like I'm speaking from experience where I don't have any recovery either). Kakashi is great when you outspeed your opponent but sometimes you won't, and then in round 2 that def/res decrease for males is really hurting your chances to be above 70% health. Especially when your whole lineup is male ninjas. MAYBE Asuma is worth it if you're outspeeding your opponents like 85% of the time. If not, I really don't think he has a place on the team.

I also think there's not much point in keeping Suit Minato around. The only thing he really brings to the team is combos. Otherwise the rest of his kit is pretty much wasted. His mystery pretty much has the same effects as Kakashi's except it isn't unmissible. Also, no one on the team benefits from his special suit ninja ability to give female characters life recovery.

So after all that (sorry it is kinda long lol), I'd suggest this team: 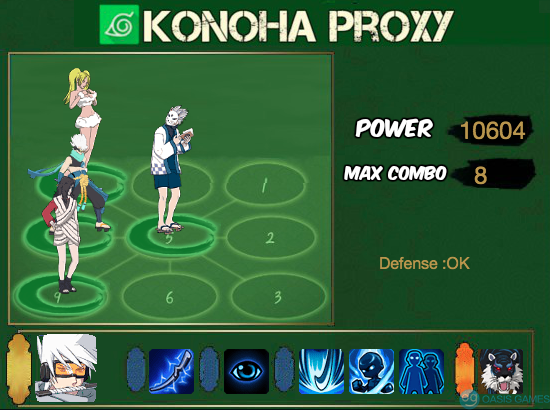 S-Naruto gives a similar buff to Asuma, but it just applies as flat out +30% nin for your male ninjas while she's on the field. Her mystery is actually useful, unlike Asuma's, and her standard decreasing opposing male ninjas crit by 30% could help with your survivability. The 45% chance to cause Slow to attackers is also a nice form of control.

Kurenai is there because if you're having issues with survivability it's helpful to have a healer. It's best if you have her full BT. Her mirror reflect is also always very nice to have, especially on this team where Kakashi is the only immune ninja (I took Root of the Warrior off, because in your original team it's only buffing Lightning main and Asuma. IMO, support ninjas don't really need the buff that much and the bulk you will get from the clones will help more). BT Gakido with his Y+1 mystery would be better, but unless I missed it you don't have him.

You may think it's a waste to use 2 female ninjas on a team where Kakashi buffs male ninjas. But that passive is a double edged sword and IMO it's not worth lowering the def/res of your support ninjas with if you can help it. They (male supports on a team with Summer Kakashi) aren't primary damage dealers so the atk/nin buff doesn't matter as much, and so essentially they're just taking more damage while not seeing the benefits of the passive. So by having 2 female ninjas you don't get the buff, but you also don't ge the drop.

If you took the time to read all of this, thanks. And I hope it helps and makes sense.

That lineup seems quite good ill try it out :D

But I have a plan for my future lineup: 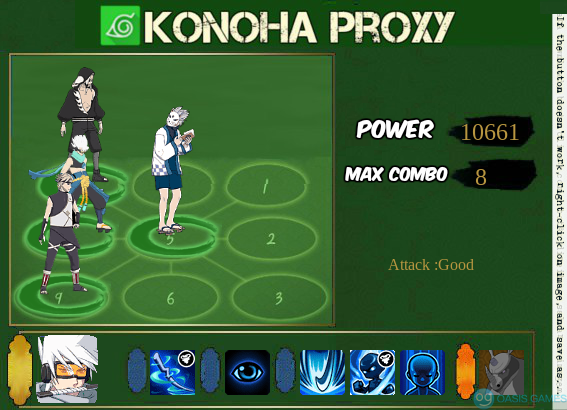 Kimi and Kaka go together and overall I feel it's an amazing lineup.

My bad, I don't really use that Naruto so I forgot lmao.