Hello, i am here to report a bug. Our server opened a little over a month ago.

When i enter the Arena function it says that we aren't supposed to have xserver matches for another 25 days. 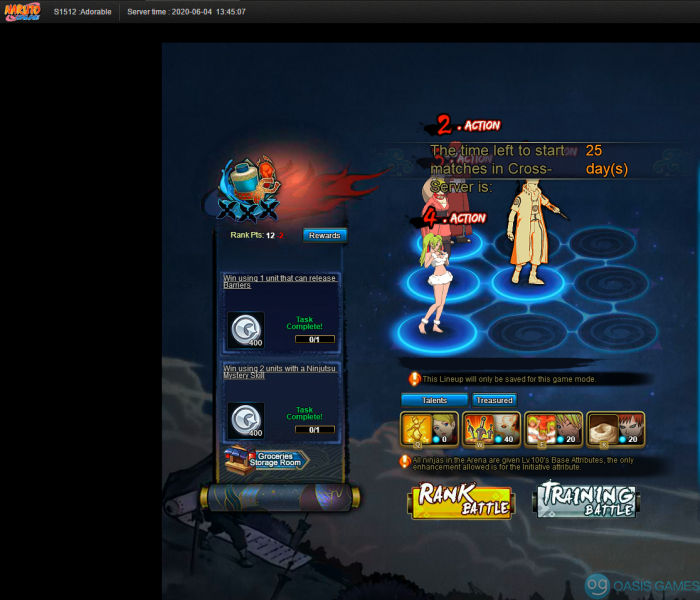 Screenshot above shows what I am talking about

Even though it says this. We still get matched against xserver players with much higher Ini and better ninjas than most of us. 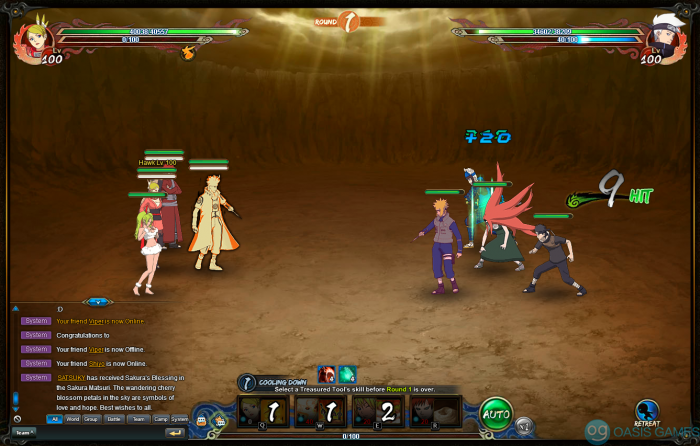 Here is an example of players we get matched against. We know they are xserver players since none of us has these ninjas

With best of regards Hawk :D

If you hover your mouse over on top his main char on upper right corner you can see his server number. I think we had something similar after getting cross server. Mod can clarify your server crossed or not. 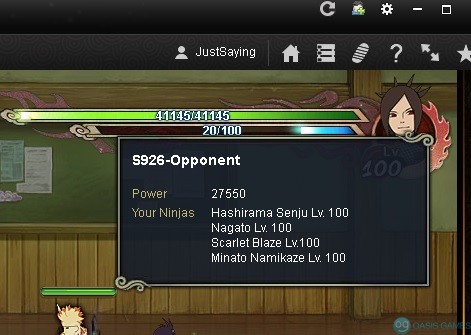 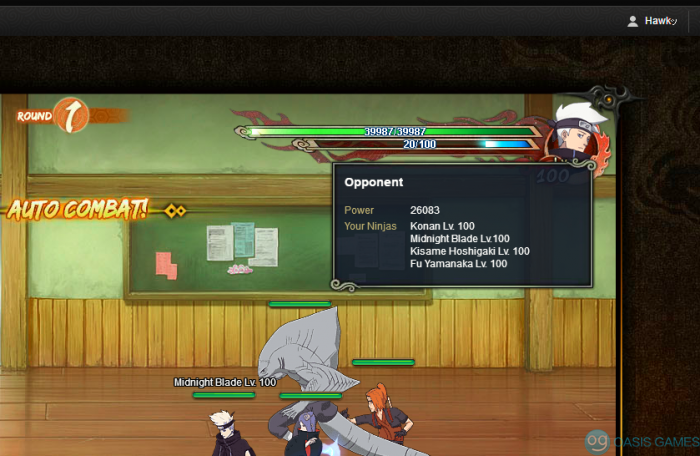 As i told you, nothing shows up when i hover above my opponent

Possibly your server is not crossed and that person is from your own server..you never know ninjas some people hiding :) Hopefully, mod can clear if it is crossed or not. 25 day is a visual bug or time actually remaining for crossing.

As another example on my pall forum 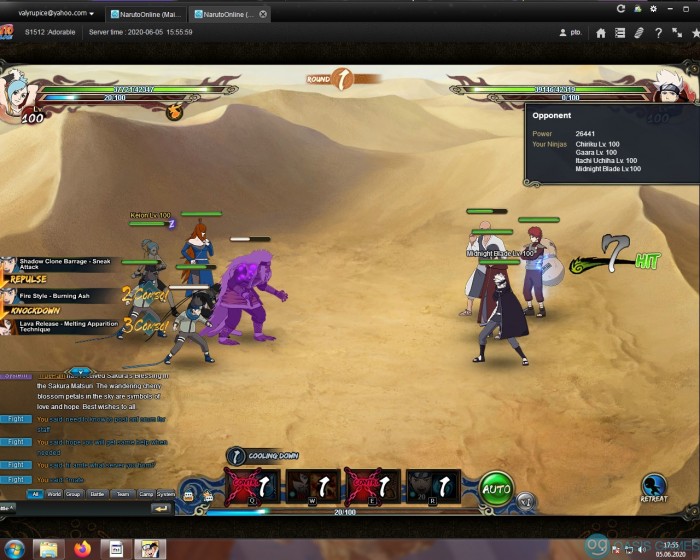 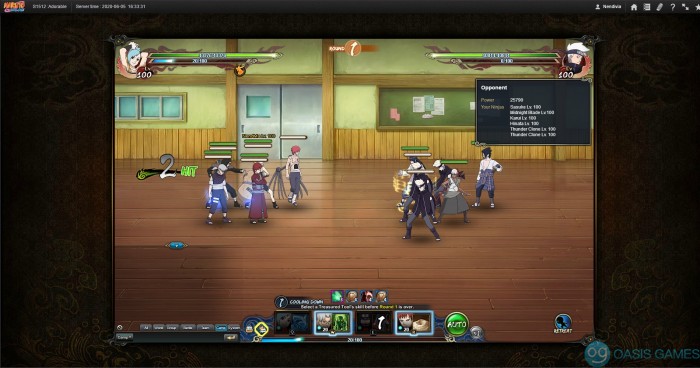 Hello there. Here is another screenshot to provide more examples questioning whether x-servers are unlocked and if this is a mistake or "working as intended".To provide some backround:

- Karui was the seasonal ninja for spring, between march-may.

- The season feature does only open up for servers that are at least 60 days old, so the same timespan as with the x-server function, at least to my knowledge. We were locked out of the feature and didn´t get a way to receive her. So that player in the screenshot couldn´t have been from our server. Same as with the screenshot of chirku further above.

- Even if we don´t consider seasonal ninjas, as mentioned by the op and his second screenshot there are currently no players on our server who have jonin minato or shisui and we only have one player with above 70k power who has unlocked the "eternal belief" cloth that lightning main is wearing on that picture. He doesn´t have those ninja either.

- Just to throw it in there, we recently got both the "decicive bonds" as well as the "3vs3 arena" unlocked which seem to be, by nature, x-server related as well (please correct me if it is not). The difference here is that despite the inherent power difference (meeting 300k+power people compared to our highest, which is 70k) we don´t get punished that hard for not climbing a ladder or anything because we still with lucky matchups get some of the rewards at least. Not so with regular arena season being 1vs1.

Considering all of the above it would be great to get a clarification on the matter whether it is meant to work like that or not. Maybe a summary on what features unlock ba

From the looks of it your server is crossed and from what I know, new servers only need 30 days before being crossed and paired with a cluster. As far as I know, DB and 3v3 are cross server events. So you are experiencing a visual bug.

Hello,
I am looking into this situation, but this is not, as was previously just mentioned, just a visual bug. Please disregard that. I suspect that these are the computer-generated arena teams added to the arena function to help new servers that may lack enough population to find consistent matches, but I am not positive about that, and am seeking clarification from the developers. However, I have not yet heard word back. I will let you know as soon as I have confirmation one way or the other.
Thank you for your patience regarding this issue!

Thank you for looking into the matter and also clarifying that the 60 days are no visual bug. Also if there are in fact computer generated teams to support low population servers and they turn out to be the "culprit" of our current arena experiences maybe there is a way to lower them down a bit in power/ninja strength to match our current progress so people have a more balanced and fair chance until actual crossservers unlock. Looking forward to a solution.

So how long until staf give answer to what was posted here and on other posts about errors on new servers? Should we wait until we get bored and we all are 60+ days old server and the post will be useless as importance? or to wait for those to be deleted by oasis staff just because? 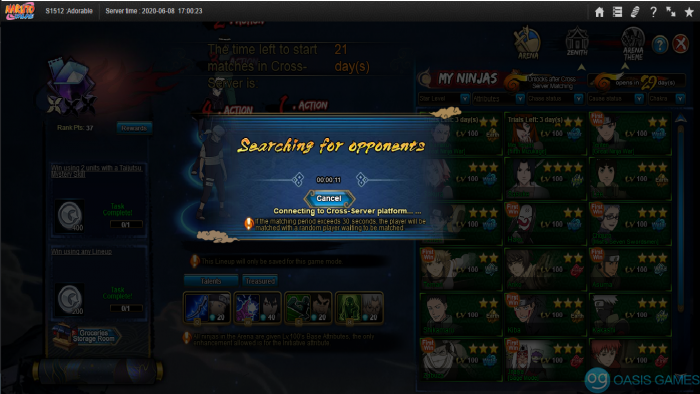 He is connecting to cross-server platform for sure.

In regards to changing or removing the computer generated combatants, I can make that suggestion for you, but it is unlikely that it will be implemented in time to help you before you make the change to cross server combat. Would you like me to submit this suggestion to the developers?

In regards to answer turnaround time, staff does not work on weekends, and work on GMT +8 timezones, so turnaround times on answers can be delayed as conversations are not always prompt. Thank you for being understanding of this as we puzzle through the matter.

I assure you, I do not intend to ignore your situation nor let it be ignored "until it no longer matters."

To clarify your situation, it would be helpful if I have as much information as possible (such as the screenshot above, which I did not have before).

- You get the "connecting to cross server platform" message when connecting to arena. Does this display anywhere else?

- Is your sage world battlefields cross server or not?

- You have access to both Decisive Bonds and 3v3 arena? When did you gain access to these events?

- Are any other events cross server?

- Do you have access to cross server great ninja war?

Thank you for your responses and for bearing with us as we figure this out!

Thank you for the intermediate info and effort by helping us finding a satisfieing solution. It is understandable that there probably will be no quick fix and that digging through all the info takes time.

Concerning the use of computer generated combatants (if they are infact implemented already) I can only speak for myself and my point of view but I believe they should not be removed completely (our server does have low population so additional enemies are welcomed) but instead altered in such a way that it doesn´t become almost impossible to climb arena rank for the monthly season rewards. The goal should be to provide a realistic challenge for participants to be able to reach six paths sennin rank eventually until the end of the month. If such a change could be implemented before this month ends I would like you to submit this suggestion as I believe it is the most fair change for everyone.

Regarding the addional info you requested I will try to provide as much detail as possible:

- Our server currently is 40 days old as of the time of this post.

- Apart from arena I haven´t noticed the "connecting to cross-server" message yet (it does pop up fast and only for 1-2 seconds for me). But I am positive both bonds and 3vs3 arena should have that message as well as they are cross-server related. Will check again and edit this post if needed.

- Our sage world battlefield is currently not cross server.

- Yes we do have access to both decicive bonds and 3vs3 arena. Decicive bonds unlocked for us at the 30th or 31st of may, so pretty much 30 days after server opening. Before that happened, the npc where decicive bonds is started prompted a message counting down the days needed until this feature unlocks. 3vs3 arena was unlocked for us even earlier. One time at the beginning of may until it was closed again around mid may, strangely enough. The second time was at the beginning of june and it is currently still running.

- There are currently no other cross server events unlocked for us. The season system does pop up as a promoted feature when reaching a sufficient level but the *on to open the tab is missing. Training grounds also still promts the message that to be able to use the feature cross servers need to be unlocked and does not work. Zenith is greyed out with the message: "unlocks after cross-server matching". Also, the tab for the nature training event is missing (please correct me there if I am wrong as I have been told it is supposed to unlock at level 72, confirmed by people on older servers at that level. I am also not sure if this is related or connected to cross servers as it seems to be pve and not pvp)

- We do not have access to cross server great ninja war yet.

All in all we do seem to have a mix of cross-server features both unlocked and not yet unlocked which makes it a bit confusing to understand what is supposed to be opened already and what isn´t.

Thank you again for looking into this.

OK, I have received word back and the devs are checking into the issue. I will inform you all once I have any news. Thanks again for your patience!

Thank you. Some additional info regarding X-Server great ninja war because the question came up. Today for the first time our event info for gnw looked like in the screenshots below despite us scheduling a regular gnw preliminary for today. 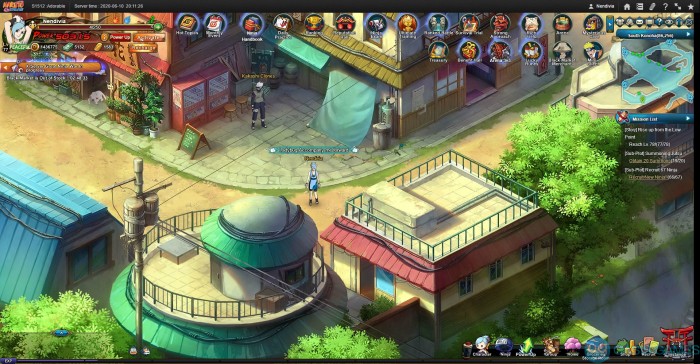 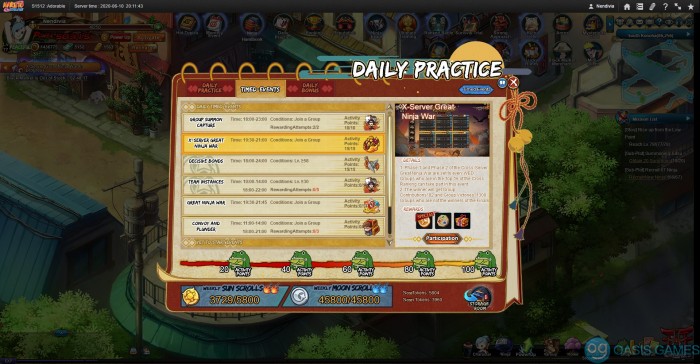 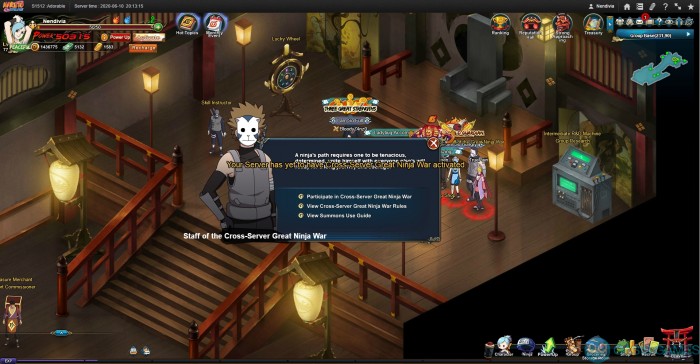 When talking to the cross-server npc however the text comes up that our server has yet to activate cross server ninja war. We did our regular gnw fights without any further issues so this might just be some overlapping visual differences. Maybe it helps with further narrowing down the issue.

So you still didnt get any answer from "staff" that is "trying to find/ fix " issue? few more days and will have full crossover events , oasis did what it does best :" give * about players reporting anything", also in my opinion autogenerated oponents are awfull, think a bit is better to wait to get a ok match up or is better to get killed by autogenerated all the time?

Hello,
No, I haven't received any word back from the developers, yet; I assume they are busy with other matters. I will ask for an update this week once they are back in the office.
Thanks!