I was just wondering what the point of having this ninja as a sign in bonus when she was given out in a firework festival a few months ago. She doesn't even have breakthroughs so there is no point in having her 4 stars. Also why is Naruto [*y Jutsu] in Myoboku Trial? This is another ninja that was given out in fireworks festival that has no benefits for being 4 star besides a meager stat raise. I'm sure many F2P player would have appreciated more Konan [Angel of God] fragments instead of the same ninjas that have already been given out. I understand that newer servers may have not had the opportunity to acquire these ninja but what about the older servers? There is hardly any incentive to play daily unless you are spending money to stay competitive or spending money trying to catch up to the competitive scene.

I'm honestly finding it hard to keep playing this game when it seems like every event cycle that passes is focusing on spending real money more and more. I've been playing on server 25 since it came out a few years ago and nowadays there is hardly anything to do. You either get destroyed in pvp or you just repeat the same pve events over and over. Its gotten so repetitive and stale.

Well this was just going to be a small post about the event ninjas but it turned into a rant in the end...

On a side note I was wondering if Hinata [Summer] has a broken barrier or something because I feel like it lowers crit rate for hidden jutsu ninjas instead of buffing it.

Heaven forbid, newer servers that popped up since then ever get a chance at a ninja that was given for free from a previous event as a "sign-in" ninja.

Just because you having a ninja doesnt mean everyone else does. And whats wrong with having 4! stars.

And if i didnt miss anything sign up ninja is Omoi swimsuit and not Hinata summer. At least thats what it says in events cycle. 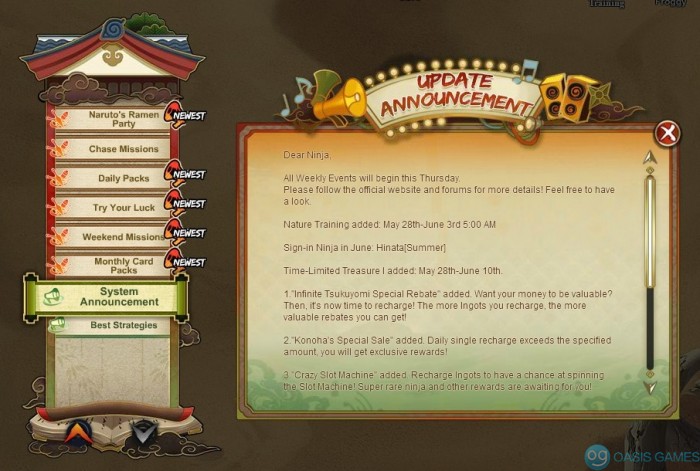 I was just going off of the system announcement.

https://forum-narutoen.oasgames.com/page/show-post-46693-1.html this is where you look for sign-in typically.

You don't need to log in for whole month if you don't want that ninja nor do you need to do myoboku if you already have that ninja too.

Im on older server but I missed last time Naruto xy jutsu was there so them giving him again let me to finally get him.

They should probably remove all ninjas from myoboku or monthly sign in because somewhere at least 1 guy already has that ninja so they shouldn't give them at all.

konan angel? she is one of best support, she give non-removable buff, she has cakra buff. it can't be free. i don't have her, but you asking for one of the best ninja free?

Konan angel will be more usefull on new servers,and they already give good ninjas for free,so I don't see why not players don't ask for her.

As for sigh-in ninja,both Hinata and Omoi are good.Hinata maybe more usefull for new players,she can be pos1 ninja for begginers.

That's a bug in announcment section in game. Sign-in ninja is swimsuit Omoi. Maybe Summer Hinata is meant for July and someone made mistake.

and plus even if Hinata summer was the June sign in ninja, why does it affect u so much