Hi, these are the best rinnegan Sasuke team if not the best in my opinion: 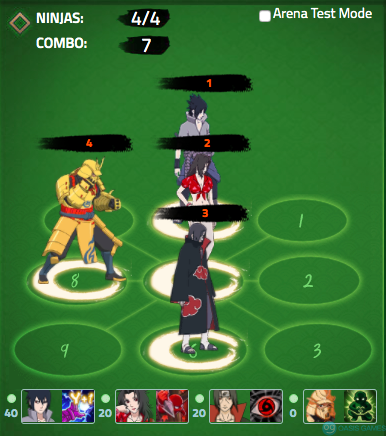 With this team, your ob

Sasuke is here for the damage, 50% chance of fear and unstoppable paralysis. Some people might think paralysis is weak, but it's super OP against Kushina, edo Minato, Summer Kakashi...

Kurenai also have a 45% chance of causing chaos plus she has the mirror. She can CC most ninja in the game for 2 rounds if you have enough control which allows you to drag the battle even more. I know most people use the rope treasure on position 2 but I personnaly went for the gourd and put every gold essence on control only. It allows me to CC position 1 of people who have up to 70k more power than me, but anymore than that, it's frequently control fail. Her sleep is really useful to drag the battle more longer. Her chase too because as soon as Sasuke get rid of super armor, she cc on chase.

Regular Itachi is the only ninja in the entire game that c*llow Sasuke to spam his mystery every round with his 100 chakra barrier. Plus, he destroys barrier like edo Madara or edo Minato that stop you from getting chakra. He also have a 100% of causing sleep with his standard which is a very good combo with kurenai.

Earth main is only here for chakra, shield and buff.

These are some of the matches I played in arena: 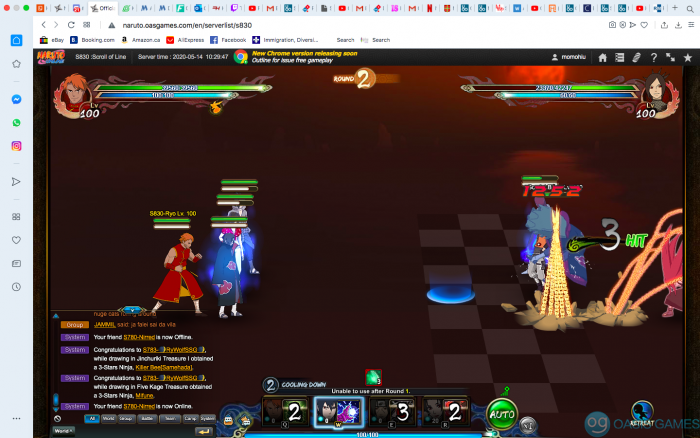 Sasuke does around 3k damage in the end of round 2 with 60 chakra and a shield.

Off arena, the strongest opponent I defeated had 70k power more than me. But he defeated me too. It's the type of team you need to play smart and not just leave it on auto like edo Hiruzen. Also I manage to drag the battle up to round 4 against a Kushina with 180k more power than me.

His damage is a bit higher than Ronin Naruto at round 2 with 60 chakra and 30% shield buff, but Ronin Naruto can hit multiple time while Sasuke c*e his mystery only once per round.

It's not a team for sage, because it's too slow and it's biggest weakness is the lack of debuff immunity.

Nice, can't see how much power you are at. For me Fear is sort of riskier than Chaos. But maybe it is good in combination with Paralys. Then you have dodgers xP.

If I get an Edo Nagato or other chakra leech spam, this gives me a chance to get my chakra back at the end of the round. Itachi also sort of dies quite easy.

It is not a serious team but it's kind of fun when you copy Shisui susano and do a 14x combo.... 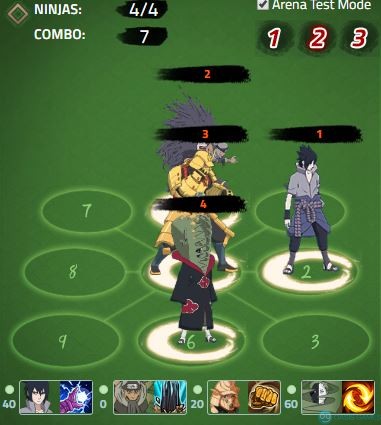 he is not the only one ... itachi .. you c*e samehada he resorts more to support such an expectation .. of the chakra .. since therefore he will have the rkra chkra since nagato.madara when stealing .. I have said that when they kill a shark mequita the 20chakra but as they kill the shark I recover chakra and now with the advance .. when it comes. I'll see how it is ..Thanks for kurenai summer .. me was think...

Jib Edit: Hi! I have edited your post to include the video instead of a screenshot.

Kasuma I didn't understand every thing you said but I think you said that regular Itachi is not the only one that c*low Sasuke to spam his mystery every round. He unfortunately is because Sasuke absorb every remaining chakra each round and you will be left with the amount of chakra you are suppose to have at the next round. Itachi turn that to 100 every round and Sasuke needs 70 chakra to spam his mystery.

Also the first Sasuke team I mention start doing real damage at round 3 since you get 150% buff plus the previous buff at round 3.

Alright the second team is more like a blitz I thought about during one of my arena match against kimimaro halloween. I never tested because I don't own Kimimaro halloween so I can't do a complete review but here it is: 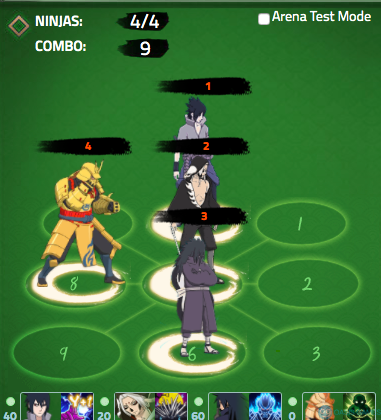 So you should Sasuke mystery +2.

We already know why Sasuke is in the team, let's get to the other ones. Kimimaro is here to stop an enemy from cancering you (does that word exist?) or launch a mystery round 2, you have to use him carefully. But what's more interesting about him is his barrier. It cancels other barrier and boost your mystery damage by 60%. I don't know how mystery damage exactly work but it's more OP than a 60% attack and ninjutsu boost. Plus he decrease chase and standard by 30%, it could be useful against Kakuzus and Ronin Naruto.

Madara is here for chakra and 20% buff. If you have him BT, it's even better.

So round 2 you will have 50% buff on attack and nin (Madara+Main) + 150% nin buff (chakra) and 60% buff on mystery damage. I already hit with Kimimaro's buff in arena with my previous and only 60 chakra and the damage was already pretty disgusting. 4,5k damage.

The weaknesses of this team will be he lack of protection: no mirror, no immunity, weak heal (only katsuyu's mystery)...

But I think it might be even stronger than the first one so if somebody has the ninja please test him and tell us how he feel.

.. the only bad thing about sasuke as I mentioned is that it is not cured .. it is not immune either. and ignition and poison .. they kill them too fast .. he doesn't even make it to the fourth round .. he is dying .. his two passiva. rinnegan +2 recovering chakra is very bad if you do not have chakra ninjas .. the chances of recovering chakra are too low .. since round 1 your enemy will have 20 chakra he will always use it so it is lost .round 2 logically your enemy has 40 of chakra obviously will use that chakra the third round you may steal chakra but it will also have its losses for this ability to work it depends on hitting sasuke with taijutsu .. passive susano +2 they depend on a ninja also on chakra but that passive is unshakable .. skill and + 1. It only works until round 4 but Sasuke almost never arrives, and it also depends on a ninja too. they are skill dependent on other ninjas. In conclusion, properly speaking, sasuke skills only serve from the 4th round ... round of the dying

my friend skyfall came up with this i did change kimin to pos 1 and changed the mystery to blast cut, seems to work for me 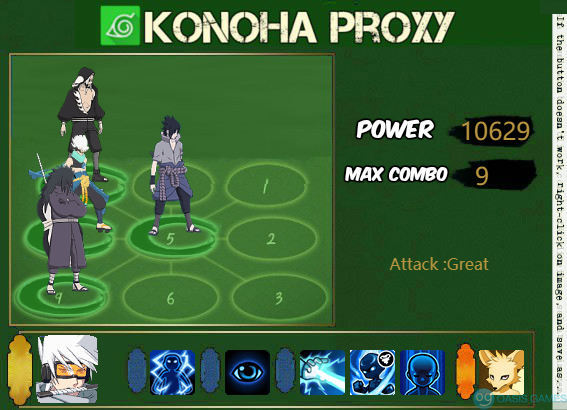 How is the damage?

Im looking to get a BT susky soon but im a 400k f2p so, any team recomendations with not that many high end ninjas?

If you have Edo Nagato with BT (especially the Y+1 rinnegan one and Y+1 reflect passive), that's a good place to start. You can put Sasuke pos 1, Nagato pos 2, pos 3 Earth or Fire main, pos 4 someone like BT regular Itachi. Or instead of Itachi you can put Kakuzu and switch positions with him and Nagato (Kakuzu pos 2, Nagato pos 4). I don't know all the ninjas you have but you probably have a lot of options.

You don't need to steal chakra from your opponent to get 100 chakra round 1. As I already told you in one of your post, there areplenty of ninja that c*low you to get 100 chakra round 1 such as Tsunade young adult, anbu yamato, almost every main, Shark Kisame, Mabui, Madara founder... And personnally, who is going to use a Sasuke rinne team without a chakra generator? 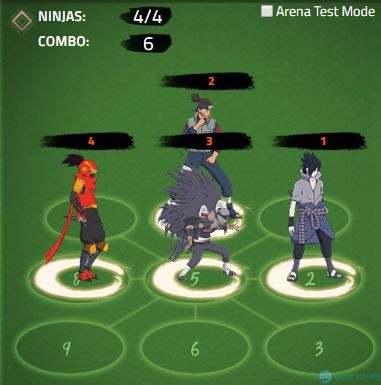 Tyvm ill try that as soon as i get his BT