Now first, let me preface this suggestion by saying this, I love this system and I always look forward when a new scroll is released. However, there is a lot of room for improvement. In each of the scrolls, there is generally some ninjas that say "Limited Event" on them, and if you click them, it doesn't list really anything in other methods. So in the first scroll we have 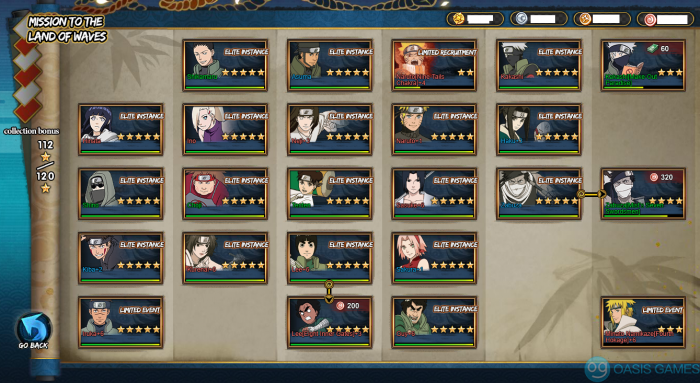 That Minato 4th Hokage in the bottom right corner, doesn't show up in events all that much and if he does, he appears in Hokage Optional Packs which include 1st, 2nd, and 3rd Hokage as well as him. Now clearly out of all those, the 1st Hokage is the best option because of his skill breaks. And with Minato Hokage having his own Skill Book and add in the fact he doesn't appear very often, doesn't it make sense to let players collect his frags in this scroll so they can 4 or 5 star him while getting his Skill Book? Why not make him available with say 1,000 Sun Coins for 1 frag and you can get say 2 frags max a day? Or what about doing it like Kakashi [Make Out Paradise] where we can pick up frags with coupons? In which case, just make 80 frags obtainable at once if through coupons.

You have other ninjas in these scrolls such as the 2nd and 3rd Hokage, Hidan [Death Blood Possession], Tsunade [5th Hokage], Ino [Swimsuit], Fuguki Suikazan [Samehada], Kakashi [Anbu] Itachi [Anbu], Shisui [Kotoamatsukami], Masked Man, Jonin Minato, Each of the Young Adult Sannin, Asuma [Edo Tensei], Tobirama [Edo Tensei], Hanzo Salamander [Edo Tensei], and everything in the last scroll Holiday Commemoration, its such a waste that we can't pick up all these ninjas through Sun, Moon, Survival, or even Coupons through this system, even if it is limited to a certain amount of fragments. Also, let's not forget the ninjas that were removed from the GNW Scroll (Shikamaru [Great Ninja War]), I mean, sure if Oasis has plans to let these ninjas be common in events, then don't let players be able to get them, but if not, why lock them behind events they'll probably never be in?

This is why I believe the Collection Scroll System needs to be looked at again.