Hello, i am BULLYED on my server! it started with me making a joke to Typhon (sometimes we joked), we needed 1 more player to our party and someone asked typhon in group chat, i said "p2w is too busy" (becouse he always sayd he is busy) so i made a harmless joke. after that Typhon started insulting me and responding rude. prior to this he have called me insults like "ur a begger in 3v3 arena", "begger", "idiot", "are u a boy or a grl", etc. i told him top stop becouse his jokes can be taken in a wrong way, but he kept saying them.(back to the insident), he responded rude and then a few moments later a player "Pizdi ee Puli" (who started the big issue, and involved himself in a short conflict between me and Typhon that happened more than an 1-2 hours back at that time) started throwing insults and making rude remarks becouse of a NON-insulting joke to Typhon. he called me cancer, kid, biitch, *ed, etc. so i responded to him that he is throwing himself like a dog behind Typhon for a harmless joke comment. and he kept insulting, so i countered his insults with "... yes your the *his insult*", then i explained the situation to the group leader and he said "jsut leave it be, and i agreed and said yes thatswhat i want, can u tell your friend Pizdi ee Puli to leave me alone". then next day they *ed up on me and kicked me from the group thoe i was friendly to all. i asked why Pizdi ee Puli kicked me with his friend (leader), and he started making RACIST REMARKS, INSULTING and INSULTING MY FAMILY. that is not acceplable and in other games people get banned or the bullied people gets moved to another server WITH his progress. can you PLEASE move me to another server WITH my progress so i can keep playing the game? i dont want to be bullied my dumb people who likes to make RACIST and INSULTING comments. in the bigger screenshot there is proof of Pizdi ee Puli making this remarks and i am not okey with thise. calling someone * IS ILLEAGAL and in some places he can get arrested for that. it was NOT a joke comment, it was insults. and i am aware of that also ahve said bad things, but it was in my defence like every other person would do. Please help me with this issue, i want to keep enjoying this game, but please move me to another server WITH my progress, for a big company like you it is possible and you have the skill for that so i am please asking your for your experts help... best regards

contacted support but the submit *om wasnt working... please fix that also when making a report to the support. 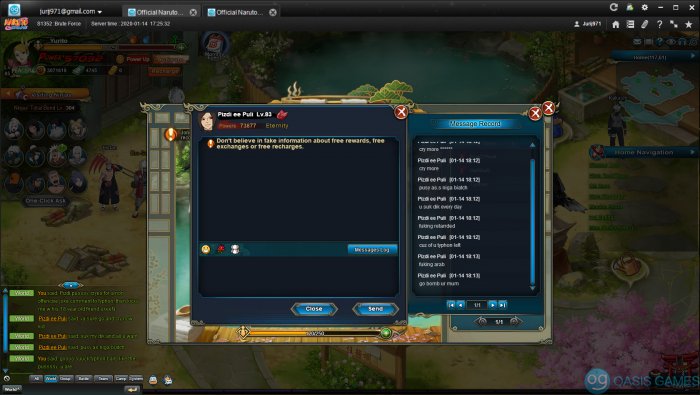 Thanks for reporting XD, we're on international grounds/waters, as you know, dealing with racism is part of the work there.

If you want to stay in your server, try finding some local friends to tag with you. XD

Good luck, since I'm just a passerby ie: not an official staff.

I am so sorry you had to go through this abuse.

Have a nice day.~