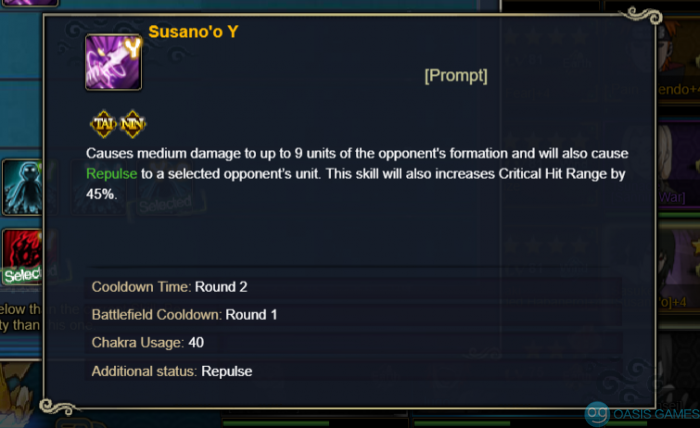 Any1 what this actually means, i always have used the +1 in him, but i was curious today if this was any good

update: i tested the Y variant, and it seems alot more powerful, where the normal one does around 8-10k dmg, the Y did 20k plus dmg

My theory is that the normal one limits ur dmg to only 1.5x normal dmg without crit, and also limits ur crits to only 75% of the enemies. This means that its probably better against stronger opponents but worse against weaker ones. whereas the Y either increases injury or crit by 45%, not sure. Perhaps someone who knows these answers can confirm it

Injury influences how hard you are going to hit with critical attack (and again, when opponent lands a crit on you, how much >less< damage it will cause)

They are in simple words equivalent of critical hit chance and ciritcal hit damage stats of other games.

Regular susano sasuke mystery has fixed 75% crit chance and a fixed 150% crit damage multiplier. Meaning the only way to increase its damage is increase you ba

Now how that influences the game. If you have very very low stats, for example you have 40k bp in total across 4 ninjas- fixed injury effectively makes you deal 1.5more damage on crit. If you tried Y mystery, it would most likely deal less damage, as your injury stat isnt really developed yet. However after a certain point*(again, see bottom of the post) injury stat starts to make you deal more than 1.5x of you ba

*how exactly stats are calculated, dont ask me. Nobody knows for sure how stats work in this game as there literally never was given a formula for dmg or defense in general. We have rough idea, but thats it.