So now that edo minato breaks are here, is it just me or does any else feel he was way way way overyhyped?

I am taking having all gold breaks into account here.

( interrupts, is undodgeable and has 30% increased damage).

-But, has 3 turn cooldown

- chase to reduce cd can only be triggered once a round

-since this way his usefulness is still largely dependant on dance of impetus or gakido, c*e +2 chase.

- that chase does recover health and self buff him, but it still a lacking health recovery compared to the much cheaper 6p.

So here he is slightly tankier than before with his dodging standards and possible leech chase, but still has low life, low attack power and hits like a soggy newspaper, has a weaker and more difficult to rely on leech than 6p, And with this choice he is still largely reliant on very specific teams to drain enemy chakra and to reduce his cd for him to be a viable option

2: use him with y mystery

(2 turn cooldown, but hits fewer units and can be dodged)

with this and y chase he can be used consecutive rounds

-But mystery can be dodged, losing the one redeeming ability this character had.

And in this case, he hits consistently, but still has low damage output and no control abilities, so he is like a much more expensive, yet worse version of 6p.

Now I wasnt expecting a game changing break from him, but from what I heard about how I better get saving his frags and how he is so popular for a reason in china, i was expecting more than him just being able to survive a bit longer than before

scaling and multiple dodges are a big deal and that makes already better than 6p, his BT's allow you to change your playstyle at will not like the stagnant 6p, he doesnt have control but burn + tag allows you to do more damage to non inmune units , 6p is way cheaper but "being able to survive a bit longer than before" can get you to win matches.

1 kakashi susano'o on the field and they won't dodge...

All his damage is tai more or less, so any leaching effect will heal him back too...

more damage to non immunes is a low selling point these days though.

and im not sure how good his scaling is since is starting stats are so bad, i dont have the most power in the game ofcourse, but trying minato out, I lost to guys i usually beat, i didnt fair any better against the players or lineups i usually struggle with, and even with a fair power advantage and times where I won the matches took so much longer than with my other lineups because even a few rounds of stacking and wind main buff and barrier, my minato simply cant deal the damage my other pos 1 characters can, he was unable to take down the likes of kushina,6p and kakuzu they just took the beating and leeched/recovered enough health to get through to the next round, at no point in 10 rounds was the stacking of my minato personally enough to make a difference

only sharing my experience ofcourse, not claiming it as fact, im sure other guys will love him now, but so far i have no reason to go with my sb minato over any of my other teams and he is no more of a viable option than when I got him, unfortunately because I like the character

you should compare edo minato and minato kage/jonin/suit

you use him with y+1 mystery which has 2 turn cd. then his mystery will reset every round he chases. thats all there is to him. well i guess that and his annoying barrier.

yeah, it works, but since y mystery is dodgeable you lose the main reason for using minato, 6p would be more reliable pos 1 then.

by the by I compare him to 6p because lets face it these days everyone and their dog has him, so im trying to compare minato to other currently viable pos 1 characters.

Minato scales ninjutsu every round, he can either reduce someone's defense or their ninjutsu when they attack him and cause them tag and burn, he dodges the first attack and he has a 50% chance to dodge any standard attack. He can pretty much use his mystery every round. His barrier is really op

How is six paths in any way more reliable than him lol, you are just looking at his mystery nothing else

Do you have him? and his breaks?

Because all i am doing is sharing from my first hand experience here, and 6p is definitely a better pos 1

firstly the barrier may be nice, but how many of us have all the edo kage?

as for the rest of it, the only usefull debuff is the enfeeble, at this stage in the game with easily over 90% of players using either largely immune teams or teams that can reflect and/or consistently remove debuffs, burn and tag are nothing to write home about.

I would *strongly* argue against the 50% chance to dodge, still early days with the breaks ofcourse, but mine has dodged half a dozen attacks at best , and that is a generous estimate, and just to be clear i am taking into account using him in arena/sage/training grounds/bonds/gnw/ti/strong approaching, and in all aspects of the game, one thing I can tell straight is that my minato chance to dodge is more accurately around 5%

true minato scales, but when you start from weak as hell scaling doesnt matter. I faced the usual teams 6p/kushina/kakuzu etc etc with guys I usually beat in sage, but i either lost or took me the full 10 rounds, because even with a full match of scaling minato damage output is nothing impressive. Unless you have the power advantage to have high damage output from the get go, the scaling is going to make jack * of a difference. my minato as stacked as I could make him was unable to finish units that my 6p/ kakuzu/kushi/agk teams usually beat in sage in 2-3 rounds

You can say what you want, I am not here to convince anyone, just talking about my experience in some down time. and naruto hits consistently, has that leech that makes him borderline immortal and can control with his chase.

if you go the consistent cd reduction route with minato, he hits 1 less ninja than naruto, loses the undodgable interrupt which was the best thing about him, has no leech/ health recovery ability, is very fragile, for the first few rounds ( easily the most decisive) he hits much much weaker than 6p, and has no control debuffs to inflict. I concede enfeeble seems nice, but unless you have the exact opposite experience to me and minato's dodge break actually works enfeeble alone is not enough reason to ignore 6p then naruto is simply a stronger, harder hitting and much more durable pos 1 choice.

disclaimer i hate 6p, he is the most boring character ever conceived in a video game, and if I never have to face him spamming and leeching for 10 rounds again I would be a happy man, but from my personal experience using the 2 of them, the cheaper, much easier to obtain 6p is a far sturdier and more dependable character

dude its exact same as cn, the life recovery chase is +2

and y+1 is not unmissable you must be mistaken

well you effeble is useless because of immuse ninjas yeah kakuzu is immune...and he is one of me

And you are not yet used to minato. With a good team(killer bee broken, ningendo broken or nagato broken) there is no chance you could have lost.

He is not overrated. He is OP with a great team. Try the team below and if you have faster ini, watch your opponent curse you for being unable to use their mistery: GAKIDO myst should be Y+1. This team allow you to bombard mystery, steal chakra, and reset your chakra while you opponent can't do anything about it. The weak point of this team is SUPER ARMOR. 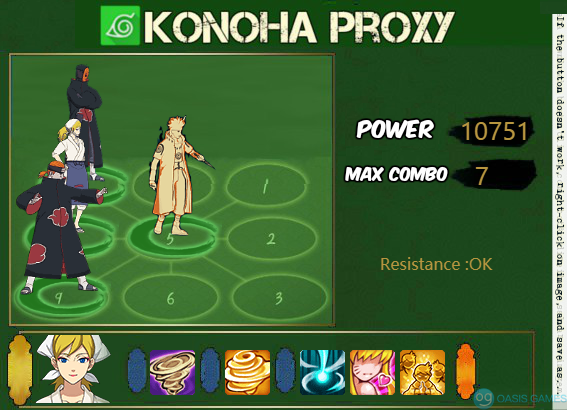 maybe mistake in translation. I dont playing on CN serve so idk but for example this vid https://www.youtube.com/watch?v=3edQbYQ9O6s. Skills are different.

Ahaha nice joke.. Six path is better than edo Minato sb?? Ahaha wheres part of six path is better than edo Minato? Life steal?? Do you thinkthat six path lifesteal is enough to kill edo Minato? Ahaha. 50% dodge for stadard attack for pos 1 is already op. Lol. Can six path hit edo Minato with his standard? Can he reset if he can't hit edo Minato? Ahaha.. Now if edo Minato mystery is can be dodge then do you think standard attack of edo Minato is not op to kill that * six path?? Nice joke ahaha.. Six path can't even stand AGAINS kushina and kakuzo sb.. Ahaha.. Maybe bro your brain was is in somewhere else or out of the planet ahaha

Well is six path will win with this line up?? No edo hashi sb then edo madara is up.. Ahaha always win barrier remove all buffs in 1st round can't get any c*ra while barrier is active.. Six path with no scale only mystery for 1 round ahaha.. While edo Minato for every chase can up his attack and combo rate.. Again nice joke ahaha 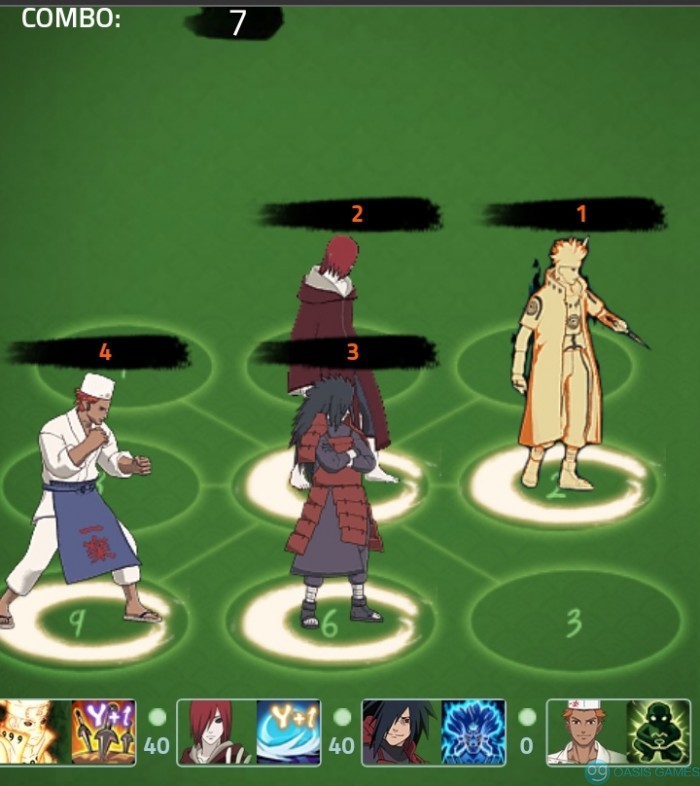 Shh, guys, let OP whine, don't say it out loud how good he is, we don't want him getting nerfed.

shh he cant get nerfed on by any means. Even though they have released shisui susanoo but still only 600k+ whales will get shisui so no worries

Me... Anything over Naruto 6P any day. Even Konohamaru kid.

But for me, Any top tier over Naruto 6P any day. KKZ > Naruto, Kushina > Naruto.

Naruto has to reset with standard, Minato has chance to dodge his standard and his mystery in 1 round of turn. Meanwhile you can just bait Naruto with Minato standard and hit him with mystery over and over with scaling.