Alas, if hashirama has access to skill breaks at 3 stars then so should other me

Just to let you know, since evidently you are a new player, this game has always been full of tricks played by oasis to make wasting your money simply by not giving you a complete and transparent information about the events proposed.

Do you want a concrete example?

For many months in that event there was a hidden counter that prevented any possible chance to win the top reward after somebody in your same server won the reward itself once in that specific day and resetted the following day.

Little problem, even if oasis was full aware of it they didn't notify this to the playerba

You are talking like if oasis was a charity foundation full of honest people that never behaved unprofessionally when examples like this one i just recalled (that every player as old as me that still plays may confirm you) were implemented in game more than once and ALWAYS, EVERY SINGLE TIME, the first answer of a risen doubt by a player supported by more than 5 other players that oasis' management made public was that he was dreaming or hallucinating just to go back to their word if put under high pressure by the playerba

This is what we are talking about.

If you weren't aware of it because you are a new player, now you are.

Do you feel better for insulting someones personal life? Wow, first post on the forum and you're already creating a toxic atmosphere. Quoting your own words. This is no place for you. At least op has some constructive arguments unlike you.

Yup, i'm waiting for Daisuke to get back to me about the sage worlds issue 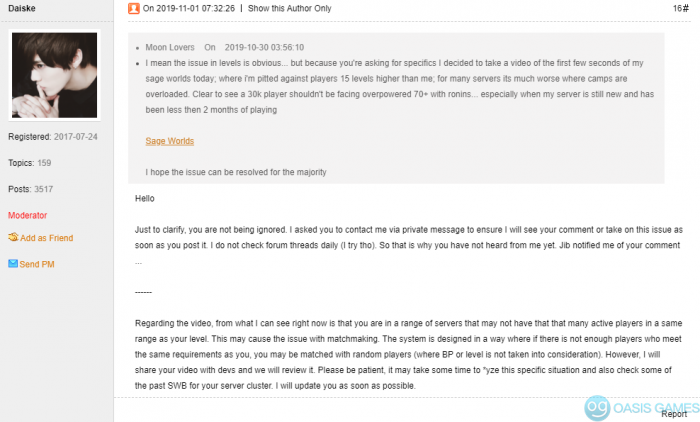 Oh i thought you had some common sense but i forgot for a sec that you are a 9 years old crying kid just for attention. I donot remember saying that other me

Well i do not have much to say about it because i have not seen any video. But just for your info sage world i messed all around servers. In our space time a 30 or 40k person is among 200, 300k and 600k, a level 70 person is next to level 90 or 105. Well i wish that it gets solved but i don't expect it to get solved, you will have to manage with it.

I never said anything about you wanting/not wanting anything;

If there are existing ninjas regardless of the amount that have 3 star breakthrough's then we deserve to know why every other ninjas are having 4 stars, It's not about money when ninjas like sage Naruto have 4 star breakthroughs and if it was just at the beginning then why did it change

As for me wanting attention, kindly leave the thread so you won't have to worry about me

Yup in space time it's understandable as overtime clusters build up making the inactive levels with higher power fall further back, in Sage however the issue persists in real time as even though there are many specific levels, the clusters continue to have a large range of levels

ok i guess hes being a bit rude and cant explain you well, let me try. Thing is that at start characters when bt got released here, it was just bt ( collect frags and use it to get book) st( using vials to do bt) was not here at that moment( no idea about cn if it was there or not). First 5 ninjas were hashi, tobirama, naruto, sakura, and sasuke. Now naruto sasuke and sakura were easy to farm so they were 4* bt from start but hashi and tobi were costly and not easily available so they were 3* bt (donot forget they were bt only at that moment so you needed frags for it). And danzo also fell in this category of 3* bt ( and he still does not have st). But then after st came out every ninja who got his skill breaks after st came out needed to be 4* regardless of if it is hashi edo or madara or karin. This was purely a money grab move so heavy spenders have to spend to get 4* me

Well its good to know that you tried to for level 10 glow. But as far as i know its that it was just a mistake which was fixed even before next update(i guess in 5 days). And if you still believe that it was you or some of other community, then why did they not cancel level 13 refinement when whole community was against it, why did not they gave madara and hashi edo 3* bt, why not cancel level 13 and 14 runes and list continues.And do you think swb is a new issue? no. If they wanted to fix it, it would have been done. In short they don't care much about what we keep saying here, some moderator will come and say that your suggestion has been noted we will forward it to developers. And result is always 0

Someone seems to have drank a nice cup of entitlement.

Just because a whale feeds money to the game doesn't give them be-all end all authority to belittle the F2Ps and act like they're superior or they have the moral high ground.

The fact that you have to reduce yourself to insulting the other person says a lot about your credibility.

Hi guys! This post is starting to get off-topic and out of hand. I will be closing this topic. Please remember that we do want to create a positive environment and not a negative one. Let's be respectful to each other. Thank you!