So today, I went to check my Naruto [Sage Mode] fragments (going to breakthrough his passive to let him scale to max) and I noticed I was 1 fragment away. Then I find myself really excited and wanted to play with my 5* Naruto [Sage Mode]. So I swapped to Wind Main for the old Sage Naruto me

Well if you face edo Itachi and your Naruto get cc, it's almost over for you. The team lack of protection. But it's probably a fun to play team.

Ironically, I faced 1 Itachi [Edo Tensei], which unfortunately of all things, chose to CC my Naruto [Sage Mode], it was an auto lose :C

Meanwhile, I don't have Sage Jiraiya (At least, I don't think so) or Edo Hashirama! x)

I just told you to say that even previously useless ninjas with trials become good and just to give you an idea for a good team that works fine even now.

Oh, turns out I do have Jiraiya [Sage Mode], not sure when I picked him up. O_O But still working on my Sage Naruto, then I'll just sit on my 3* Jiraiya [Sage mode] x) 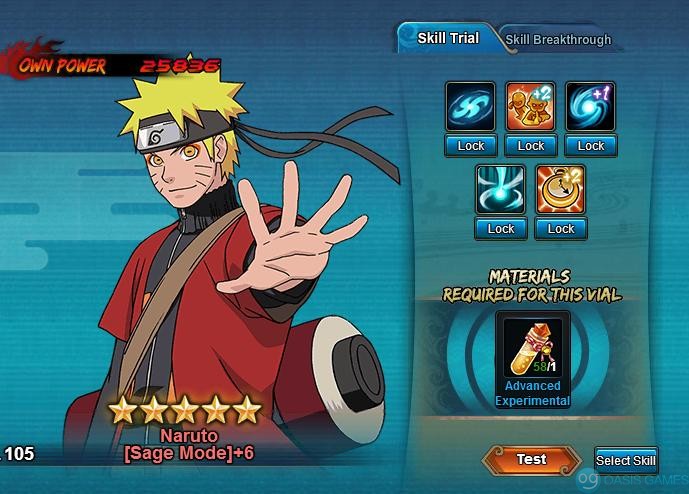 Just got +2 on his passive today, yesterday it was +1. So I didn't have that SB you mentioned ^-^ (will be working for mystery next)

Hmmm. I see Renji stepping up in the game. Looks like I'll have to wait for him to have a youtube video sooner or later (Insert the winky-winky emoticon from in-game xD) ..

Well, I do have a new PC coming in and was going to start up a youtube channel, I would do NO Content....IF Oasis moves Adv Refines from Sun Shop to Moon shop and increases how many adv refines you can redeem in Space-Time to 20 since they're more valuable of course without raising their prices ;)

If they can't do that, then I unfortunately can't do videos on it as I do not support any of their current decisions they have made.