Just wanted to share for everyone who ever considers to recharge during this event. Its really disrespectful event for players who recharge because as Customer Support said: You can rest assured that each activity or function in the game that involves an aspect of luck is fully random, and every player is subjected to the same odds. (ofc they are not telling you what's the odds)

During this event I did 30.000 ingot recharge and by that I at least expected to get that new ninja Madara. But guess even by this amount you are not guaranteed you could get something. Not even getting bigger chances for that. 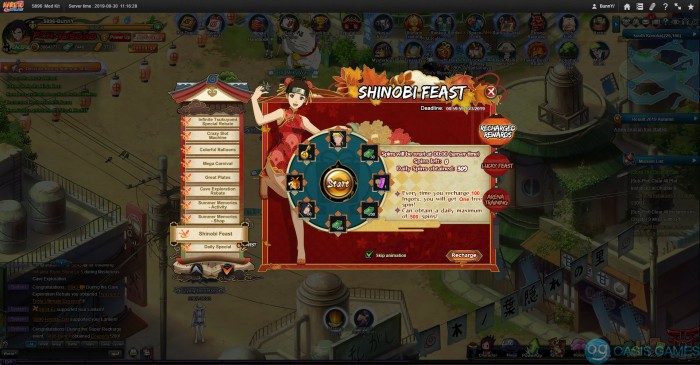 Now you know what everybody knows if plays this game since more than 6 months: never use large amount of resources on wheels.

That said 30k is a low amount considering the ninja himself has a value of 20/30k and that for every roll you get additional rewards and you also keep the ingots. Don't expect to get back from those events more than a 25% surplus (basically if you want to hope to get the full 80 ninja the minimum you need to invest is about 200k).

About the Shinobi feast wheel eberybody knows it's a 'modified' event, infact, what they told you is so true that the first roll of the day is ALWAYS THE SAME and is so since over 2 years (what changes is the reward, used to be good when was 100 coupons), but they don't admit it even if is blatant.

Yeah you're right, but I guess with these events they just try to increase our hopes ... which in the end they just kill them

Welcome to oasis games would you like some dango's as compensation? :)

Don't even need them O_o

simple programming solution will do the trick if oasis / tencents cared.

Hey, that's me in the lower left corner... xD

If i were you i would recharge another 30k 100% winning

Well 30k is a lot, at least for me. And I lost interest to recharge when these things happen.

Though as one person said, karma? Don't think so. Always trying my best to help for other players if they asks. And I'm a regular player who loses/wins. And that's pretty much game is the one forcing us to let other people down when if we are the ones who wins. I don't like that fact, would be more awesome if we could get some rewards for losing battles too when we are not capable to.

But anyway, I'm just a player who supports this game, but at these rates, guess game can start losing their supporters.

I completely agree! And thank you for your kind words <3

Like in every event :D After some playing time i knew game ,,logic" :D ... more active players have not bigger chance to get lucky reward :D ... like in our server .. many guys get many ninjas almost for free from lucky wheel, etc... its just ,,Luck" of this game .. they just wanna hold non active players in game and maybe keep them to recharge way :)

There has always been the speculation that increased odds for people who haven't logged in for awhile hitting the jackpots.....or low powered/leveled accounts, etc etc. Again, its speculation, but people have posted repeatedly of alts from other servers seemingly getting "lucky" vs others. To be fair, I have been on the fortunate side of things myself.....some examples: 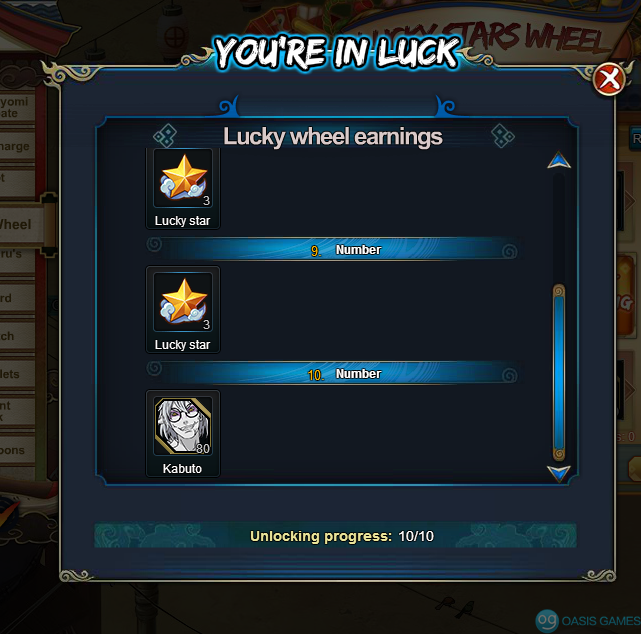 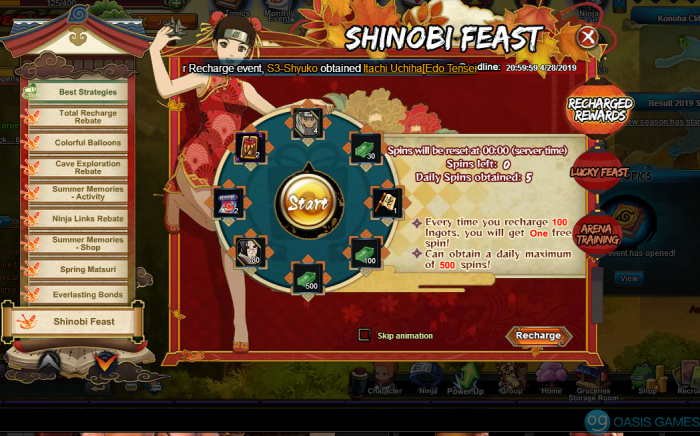 Only did a $10 recharge for the monthly card. Got it on the 5th spin. Didn't need it nor expected it.

This event is just bonkers and in my opinion....the odds are probably heavily slanted against you in getting it. There is a reason as to why they don't release the odds (even though China passed a law REQUIRING THEM TO) of the jackpots. Why? Most likely the case is if someone on their team screws up. (or forgets to even set the odds to even hit it). The less information you have/know, the better it is for the company. Almost always. OG has a history of not following through or being supportive to the players when they make a mistake. It's hard to find them or look it up, but its there if you look.

If they tell you they can't do, fix, adjust, or correct something bad, it is a falsehood, straightaway. We all saw first hand when they "adjusted" the essentially free sakura/sasuke packs that LA and NY got shafted on. Even after being told it was on purpose and it was fine. Last second, no maint, they hotfixed it and took it away.....and capped it to just 5....while everyone else got 100...for like 1600 coupons.

Another example is when they made a mistake on the ino flowers (or sakura version) and itachi susano was first prize. The mistake: The event gave out the first prize (80 frags) right away if you placed first. (instead of at the end). If someone else took first from you, you immediately still got 80 frags while the person who got bumped got second place prizes too. If he went back to first place, got another 80 frags.....etc etc. You get the idea.

Immediately, they shut the game down, revert EVERYONE and took away the frags, recruits, etc.....in a matter of minutes. Then fixed it.

I don't need to remind you of the Epic Refines fiasco either....but that wasn't their first time doing that either. They did the same thing when they asked if people wanted cross server Sage World Battles. Players overwhelming said no. They did it anyways. This was an official survey too. Even headed it with "Voice of the community" and all that jazz. I imagine they expected (or thought?) the players wanted it so they acted as if the players had a choice in the matter....they thought it was a win win for them. They were wrong. Players never had the ability to sway what would change. It was going to happen regardless, but they tried to get those extra brownie points anyways.

There are MANY examples, and each time the company always did what was in THEIR best interest over the player's. Every. Single. Time.

I tell you this because this is who you are choosing to give your time to. Your money to. If you can live with it, I wish you all the luck and grace in the world. I really do. I still play, but deep down, I really am looking for other things to soak up my leisure time over this. This game IS GOOD....its just the people making the decisions are horrible. I really don't understand why they operate the way they do.

Whelp, I'll leave it at that. You do you, but just be more mindful of who you give your time and resources to.

Jib Edit: I have edited the post to remove the inappropriate language. Thank you for your understanding!

Shyuko Thank you for your time and big message which really explains well this whole thing! I know it's such a sad truth but deep in my heart I love this game and have hopes for it as well. Even if it hurts me I still just want to enjoy at least those small moments of it. But then again, because of some mistakes, game loses their players interests and they don't play anymore or only after some time start just new server and try all over again. Which just creates a routine of excitement and boredom. It's very sad to lose people you used to play with on daily basis, because they can become like second family... or like one of my friends say: Naruto Online is like dating simulator too haha

But anyway, I don't know if we, such a simple players can do make some changes.... Though I kinda believe, when they introduced epic refines week earlier and everyone got mad, this was a reason for them introduce something more exciting such as Madara [Edo Tensei - release] and give back our glows on tool so we would slowly flow in and accept what's given.

You are very welcome. Make no mistake, adding Madara was in no way to make up for anything. Their pattern of adding ninjas has ramped up, and the only explanation/motivation behind it is simple: Money. That is my opinion.

Why do I come to this conclusion? Because every single time, when players ask for content (as in, game mechanics) they drag their feet for it. Take Tsunade NPC for a big example. She should have been introduced in this form we currently have now when Skill books were introduced (not to be confused with trials that deal with potions). Only now do they introduce her in such a basic form so that MOST of their community (as in older players and servers) could never ever EVER benefit from it. Why is that? Because they wanted to sell ninja frags. They wanted players to spend resources (coupons and ingots). Can't do that when the NPC could give them a cheaper alternative.

New Ninjas? Well almost every single relatively USEFUL ninja is almost always introduced behind a paywall......because the name in itself explains why.....they want you to PAY to climb the wall. Look no further than the 130k Ultra rebate. It comes down to simple money making. What players want is just a footnote in their main goal, which is to make money. This company hasn't learned in THREE YEARS that they would make 3x more money catering to players needs and just being caring than to just outright abuse and neglect them.

You can shear a sheep many times, but skin them only once. <-- It's been three years and they haven't learned this. They either never will or don't care to. It doesn't matter which, the end result is still the same.

Cheers Bunny, I wish you the best!

For Jib: Seriously? Did you really think it was necessary to make a thing out of a word that can be aired on all TV nation wide? Talk about throwing your weight around just to make a spash. Sheesh.

Hi! By using the forum, you agree to the Terms of Service as well as the Forum Rules which can be found here. Moderators are here to moderate the forum. Normally if there is swearing on the post, it is deleted. To avoid deleting the post, I edited the post instead. Sorry for the inconvenience and I do hope you can understand why it was edited.