Nothing against but edo madara that was invented on CN few weeks ago are here already ? and ninjas that was on CN for more than half year are still not here only because they are not "OP" enough for high ingots events ?? (I guess next week will be akatsuki ronin versions or how to call them)

It's funny how we get trials for ninjas knowing that most players don't even have close to 4*.

Yet another week with no Tsunade NPC update...

I for one don't get the Suit Naruto hate. Sure theres better more needed ninja but seeing anbu itachi suggested of all things.... even freshies have him some ever 4starred while any competent player running Uchiha's should have him 5 starred with enough left over frags for any bt if such ever comes.

One day, (prolly after 7.0) we'll get a mass drop of breakthroughs on unused nin like Sound 4 etc but by then the me

To the people: If you are really this salty over an event cycle you should "boycott" it by refusing to take part in it and getting your friends/groupmates to follow suit. It won't magically fix things but atleast all who do will be able to save up for when/if oasis ever unearths a magical gnome who can teach them how not to disappoint their playerba

Could the october ninja be changed?

Hinata Cloak for sign-in would be nice.

For those who don't have her or get her to 4 stars to do breakthrough with.

She is not going to break the game play

This post is proof they don't read your comments.

Oasis: Which ninja should we bring this week? hmmm... Bring a new version to madaraS with a different skill so we can svck ppl's money.

Oh and... they never read players' comments. why would they care?

Also what about the treasure option in the equipment of each ninja? It's locked since I started 3 years back....when are you going to open it? After 30 years?

They really need to shut down this game, our only way is to literally stop spending or quitting this game!

Possibly in the future can Oasis make the monthly sign-in ninja be Madara 5 Kage Summit or either Jiraiya [Young Adult]?

I hope oasis knows that summer is over, hopefully this will be the last for now and we can move on to halloween themed events or something better. 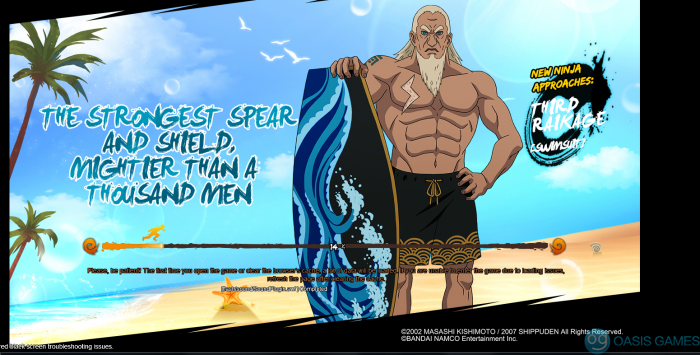