Disclaimer: THIS IS NOT AN ATTACK ON OASIS, THIS THREAD ISN'T MEANT TO ATTACK OASIS OR ITS STAFF IN ANY WAY. THIS THREAD IS DESIGNED TO GIVE FEEDBACK ABOUT HOW I FEEL ABOUT THE GAME.

Also: DO NOT CLOSE OR DELETE THIS THREAD, PLAYERS SHOULD BE ABLE TO VENT THEIR FRUSTRATIONS. So if it gets out of hand in this thread, just delete the posts that violate the rules instead of closing this thread.

Before I begin, I had created an Open Letter to Oasis awhile back when the whole Tobei thing happened. I had hoped that feedback could make a difference in how Oasis treats its players and take our feedback more seriously. Apparently I was wrong with how current events are going. A poll was posted and with (last I knew), 75% of the players who participated (even me) voted for not having Refinement update to have the cap increased and the majority wanted it canceled. Daiske had decided to push this update anyways and ignored the feedback provided. (I would provide a Screenshot of what was said, but for privacy concerns I won't.)

I'm hoping it doesn't come to that Qv, but it'd be nice to get your thoughts in this thread ^-^

Please do not attack Oasis or its employees! Let's keep it civil, no passive aggressive posts towards Daiske, I'd like to keep this thread open so anyone and everyone can voice their concerns without issues.

Naruto Online is the BEST MMORPG on a web browser. And to see it be treated terribly by Oasis makes me sad. I love this game. I just wish they would pull their head out of their *s and do things that HELP EVERYONE. I mean, if they made it a better game, then more people are likely to spend. But Oasis just seems to love upsetting the players.

@Daiske, Everyone who has been around the forums know very well that you are more than what you claim that you are. No one is buying your statements unfortunately. You were disingenuous from the start and have been disingenuous to the players for a long time. Which is frustrating. You gave the go ahead to the mods to post it, it was posted into the news section. Then you act like it wasn't official? I'm sorry, when people post things in the news section, its going to come off as official. Then you throw your own mods under the bus because the feedback was ignored and you gave them permission to post it?

I don't know how you expect us to believe what you're saying. I don't even think you believe the stuff that you say.

I actually had a very similar idea from the one you posted. ^-^ Thanks for posting yours! Let's hope that feedback can be taken seriously and will get implemented, even in part!

What you can do, is be honest from the beginning. If you stated in the thread "This may not have any impact in the decision making".

That's it, there wasn't any excuse not to say it.

Though, if that was posted, you may had probably got less responses than you did. I also want to point out this was posted in the NO Community server 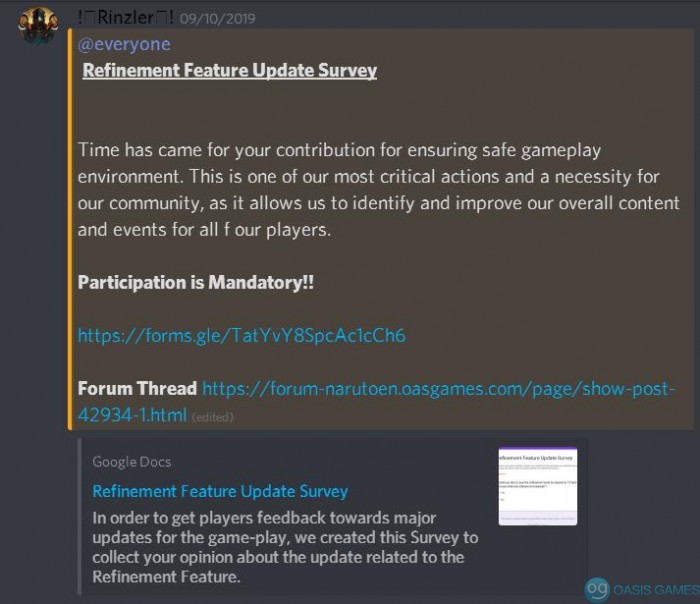 Which really didn't help matters as players were lead to believe our feedback was going to influence this update..

He was posting that in nearly every thread. He is only trolling.