I've progressed with a team from my group to level 20 in 3-man ninja exam, but those players stopped playing. Server had merged due to low activity, and I have now joined a new group. Did 3-man ninja exam with some new people who hadnt started, and we got up to a certain point (around 14-15), and decided to continue the next day. The following day, anyone who leads the team gets this message: 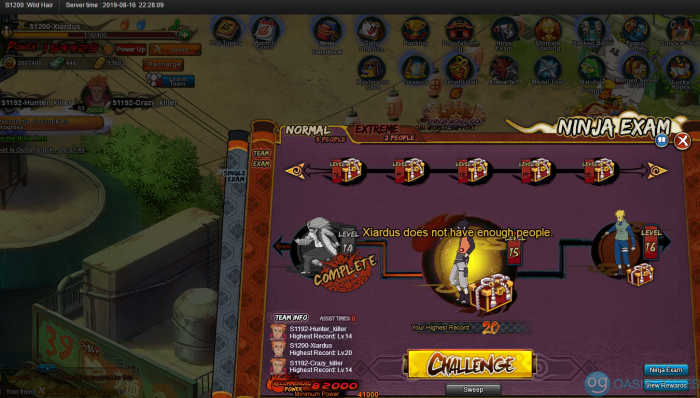 "Xiardus does not have enough people". I have not changed anything about my setup, so I have no idea why this message keeps popping up preventing me from ever doing 3-man ninja exam again... I tried changing teams, I tried removing ninjas, only joining with main, I tried repositioning ninjas, tried doing it without sweeping before attempting, tried going in with only one team-mate, tried doing it in game on browser (usually play on miniclient)... I still get that message.

I can easily join 3-man ninja exam alone no problem, but I can't progress alone due to the difficulty, but even with that, I suddenly dont have enough people when Im in a team...

Has anyone experienced this, or any suggestion as to how this is fixed?

Team Ninja Exams allow a player to help someone complete up to 10 levels a week, this is helping someone who is below your current level for this system. According to your screenshot, you are currently at level 20, but one of your team members is currently at level 15, which means that the team would only be allowed to complete level 15 right now. So, you could try getting a team of people who have surpassed your level to help you, or you could wait until Monday for the Assists to reset.

Also, your remaining Assists are found on the lower left of the system menu, right above the team members.