5.0 GNW Treasure Minato
LOGIN
Register
Forgot Your Password?
Reply
Views: 20030 ｜ Replies: 24
[ Events ] ninja exams 341-380 were added not with the purpose of giving us a challange

I'm one of those players that used to love the challenge new ninja exams gave to us players.

I always saw them as a good way to make good use of brain and underused ninjas/main skills because so far they fullfilled this exact purpose: give us a challenge that was possible to ovecome with decent playing skills, good free lineups setup and a bit of rng luck.

this time this is no more true.

I came to this conclusion by talking with some chinese friends that play in CN and with Hally (IamScrub in the forum) when i hit the first wall, exam 350.

They told me basically: stop bothering about them because is absolutely impossible at your power (360k) to go past exam 369 even if you owned all the ninjas available in game and even furthermore stop bothering because without Ronin Naruto + GNW madara setup that exam cannot be beaten not even with 100k more power than i own.

And infact i open the ninja heroes list and what i see is this: 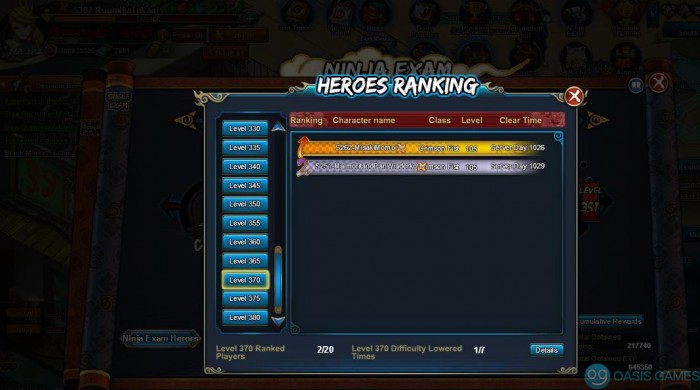 their power is 540k and 510k and they both own ronin naruto. People with higher power than them in my server that don't own ronin naruto are struck there, ICEx included.

So i ask to myself what is the road this game is following lately.

Both those heroes are basically free to skillbreak in CN once you recruit them and the average power of the players in CN when these exams were added was around 450k.

Here those ninjas cost 100k coupons summed just to own both of them and get a bunch of trials and i'm way way over the average power currently established in the rankings (i'm quite sure i'm in the top 10% of the population by being at 360k power, means 90% of the playing players are under my power).

So what do i have to think was the purpose of those exams added at least 1 year before without implementing a very severe reduction in their difficulty and bp requirements to adjust to the current situation we have in comparison with the situation CN had when they were added?

I want to hear your opinion about them too.

Thank you for this post, I wholly support what you're saying. I haven't made it to where you are yet, so I can only speak on the lower levels.

Some of the exams like 257, 259, 299, 320 are absolutely ridiculous. Definitely agree on recommended power and having the ninjas that could pass the exams given their talents and what not. Though we meet these requirements, on some of these there are so many retreat conditions, it makes the exam impossible if you keep running into these retreat conditions. Sometimes we have to retreat like 500 times before we get the exam to become possible to beat.

299, for example has all the God-mode Akatsuki hitting you with super-crits before you even get started. You can be wiped out before your p1 even has a chance to mystery, let alone perform a standard. Yes, there are tricks to the exams, but figuring that out exposes even bigger problems. Same example 299, you c*e Fu or Danzo, but you'd also have to remove your headband equipment on the other two ninjas so Hidan doesn't kill these key people before they've done what they need to do. In other exams, the player must rearrange their treasure tools so that certain positions like 3 and 4 go before the exam's team. Players aren't going to know these things unless they've done certain exams like hundreds of times and realize what the patterns are and how to beat the exam with trickery or equipment manipulation. As shallow as this game is, I don't believe certain exams were meant to be figured out this way. These exams are simply broken.

Ninja exams are good puzzles to figure out. Either some are broken to keep people from advancing on purpose or they weren't tested properly to begin with and here we are stuck with them. Leaving the broke exams in game as is, doesn't help in creating good puzzles, it's just irritating for no good reason.

it wouldn'tt even be that big a problem if we could get the ninja's an skill break hem at 3* not pay 20k minimum then anothe 40k+ to not only gett them to 4* then skil beak whatt's core for there kit or the Ronin Naruto hich i nealy 2k USD. Like there is no way in hell I'm paying 1000 for a playstation 5 much less double that for a ninja I could buy a car for that price or a semi decent pc to play actually intterestting rpg's like FF XIV an so on. if he exams were done better or the ninja's cheaper/less paywalled it would be better. As the ninja exam go I'm only at like 220 I think the one wih the speedy Hashirama but again even the lower ones have there fair share of convoluted tacktics to get past them. Doesn't help that our power average for EN vs CN is pretty far apart iirc an everything ba

I agree, it feels like we got these exams way too soon. There's no way for large majority of players to do these exams with power that we have and with low number of people passing then, we don't get many difficulty drops either. Let's just hope we don't get any more exams for quite some time. These are enough for us for long while, if we are able to do them even by then...

I understand your frustration as I’ve spent 2 whole days neglecting dailies and most events to get to 370, which i am stuck on at the moment. I’m actually glad they are this difficult as the exams are my favorite PvE thing to do in the game. The most difficult levels for me were 359 and 360;

Remember these exams just came out on Thursday and are meant to challenge our strategy skills. Also had to rearrange magas and runes since i stack my 1st position. Up until this point the exams have been relatively easy compared to the new ones just released, currently I’m taking a break from the exams as they are making my brain hurt but will get back to the grind, a lot of RNG involved with these but never give up! I think that’s someone’s ninja way... ;)

true i used to attempt ninja exam right on the first day... I just can't bother myself anymore with this. It's frustrating, it's nearly impossible, it depends on too much luck. It's just pointless to even try right now. I'm gonna wait for youtube videos to show how it's done lol

As i said they may be passed with 460-500k power if you own edo deidara full sb and also kakuzu eg full sb, but the point is not this one.

we are not talking about an op special ninja or about a specific whale-only feature (in this case would even make sense there are those requirements), we are talking about a core everyday feature.

This examns are xtreme difficult, even if i posses 400k doubgh it to finish them O:

i agree. this exams are way too earlier than it should be. why all this rush ?

) they only add events that make them earn as much money as possible because the game will come to an end soon. probably at december 2020 when flashplayer stop working

Hey there...do you mind sending me the teams you used to get through 347 until where you are now?

If anyone happens to finish 344, please share your team to me xD .. wahahaha