This week we just get a really new ninja, a more style of itachi Uchiha. And the picture just shows how we can get him. So for short, I just give 10 tips, for something maybe confused for us players about this ninja. 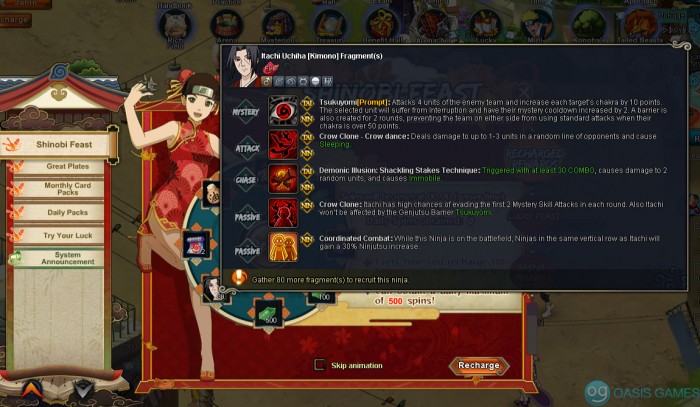 About the Uchiha Itachi (Komono), here I have something more to explain about both his mystery and other features.

1, itachi’s mystery can create a barrier called Tsukuyomi, which can exist at least for 2 rounds, and when this barrier exists, both two teams, no matter ourselves or our enemies, who have more than 50 chakra all units in field cannot use their attacks, only the itachi himself can avoid this. But, for the barrier cannot stop anyone from using mystery, some other ninja who can release barrier, not the passive but by mysteries, like madara five kage summit, and sasuke, gaara, kisame. If someone use mystery to release another new barrier to replace the Tsukuyomi, then the forbidden of standard attacks is broken and everyone can attack no matter how much their chakra is.

2. itachi has a really poor life increase, which means though he has the best equipment and other supports he is still really poor on health number and can easily be killed.

3. the most poor potential increase of itachi is even not the life, but the attack, only for 894, which means he only can act as a control ninja but not control and damage making the both, like itachi susano.

4. the mystery of itachi do not have a desc

5. as this itachi still has the tag of Konoha, a Kakashi susano maybe a great enhancement as a support in the team.

6. if your chakra is just 50, you still can use your standard attacks under the barrier Tsukuyomi.

7. all the not immunity units which is attacked by itachi will get sleep, the rare of causing sleep is 100 %.

8. the meaning of the barrier is that, for the ninja who need higher chakra to increase standard attacks’ damage, like Ay fourth raikage, kakuzu, if they have more than 50 chakra then they cannot attack, if they have less than 50 chakra, then the buff provided by such little chakra cannot support these ninjas to create satisfied damage.

9. the increase of 30% ninjutsu is a halo passive, which cannot be cancelled by Han or Madara five kage summit, and can work with some other increase skills.

10. the ninja itachi should mystery: first, itadchi Uchiha edo tensi. Then, kisame, madara five kage summit, hashirama senju (first hokage) skill break through. Third, the ninja in enemy team which is the only one who c*e chakra in round 1. Fourth, control ninja like yamato anbu , the last choice is the enemy main damage maker, which always be position 1 in team. So here is the priority to keep the barrier, but in the real battle sometimes increase 2 round cooldown time on the enemy position 1 is more enough, especially in great ninja war or in deceive bonds, as a support team. So how to use this ninja still needs to be well considered for us.

As a summary, itachi now has the strongest control mystery in Naruto online, and if we c*e him well then he can save the world in some battle. But how to use him, consider him as a position 1 or just a support ninja is still a problem needs us to weigh. So here is the 10 tips of Itachi Uchiha (Kimono), anything not clear can be asked in the reply, thanks.