In the very near future, we will be such lucky to get another strong ninja skill breakthrough, Uchiha Madara (Founder of Konoha).

As the strongest man of Uchiha family, the first mode of madara has already be given up for such a long time, even someone use him just want his passive of increase 40 chakra, which is really not suit for such a strong ninja in the comic. So here after skill breakthrough, our master Madara finally can act as a feasible position one, the main damage maker.

here is the normal Madara before skill breakthrough. 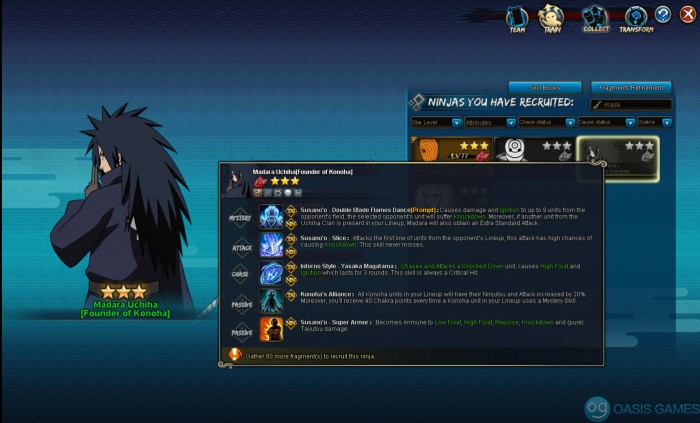 +2: increase the target unit number from 9 to 12, and also when other Uchiha ninjas exist the extra attack increase from 1 to 2.

Here is really important to select, if in the great ninja war, of course we use the mystery +2, for more enemy units in ignition and also get on more extra attack. But when we are in 1V1 pvp, and in the line up we do not use any other Uchiha ninjas, then maybe the Y+1 is the more suitable choice for us to use the mystery at the beginning of round 2 to cause damage and control.

Then is the attack, also breakthrough and branch:

Y+1: reduce 30% damage, but suppress immunity of chase attacks until the end of the round, has a chance to cause knock down.

The +2 increase damage, though the 30% increase seems not so bug, but when you combine this with madara can earn 2 extra attack by mystery, and also if for some ninja like itachi anbu or killer bee, madara even can attack 4 times a round, and this way the increase of 30% is really hurt.

Then consider about the Y+1, sometimes it’s a good choice, but the suppress of immunity on chase attack is after the attack, which means madara must mystery after his attack to cause knock down on ninjas who immune from chase attack, and this is really not fit the vision. However, suppress of immunity on chase attack is still a strong debuff, though this way Madara cannot cause too much damage on his attack like +2, and this choice is just use Madara as a support ninja, but if Madara at position 3 or even 4, then the suppress would only can serve himself, but not the main damage maker on position 1, for the suppress will cancel at the end of round. Also, the chance of cause knockdown is reduced, from has a great chance to has a chance, which is also a strong weaken. So how to use this attack well is the thing that need to be well considered.

+2: increase 10% damage, and can be triggered twice a round.

Y: reduce 30% damage, and cause weak until the end of round.

Weak: reduce the target unit attack and ninjutsu to 75%.

+2 is a normal strengthen, increase the damage, and give one more trigger time. But here I strongly suggest Y, expect your line up really need the one more chase attack to trigger 30 combo or something like that, for weak is really so important. If we use Madara in position 1, then as long as the enemy main ninja is not immunity with chase attack, we can use our Madara to get his attack and ninjutsu 25% off, which means the enemy line up can cause damage much less than before, the 25% of attack and ninjutsu is not means the damage also gets 25% off, we all know that the damage should be calculated with the enemy attack, ninjutsu and also our defense, resistance, and maybe after the 25% of enemy ninja that ninja’s damage will get a more reduction than 25%. So here the chase attack Y is strongly suggested.

Y+1 and +2 are all useful, but for now we have too many ninjas who has evading or immunity of chase attack, so the Y+1 cannot get such big benefits as +2. Imagine if a ninja like Naruto (sage of the six path) or kushina uzumaki (red hot-blooded habanero), these two ninja already difficult to kill cause their leach or life recovery, if we can let them increase 20% of highest life number each time they use mystery, especially like Naruto who c*e mystery every round, then he will be really difficult to die anyway. So here we suggest +2. 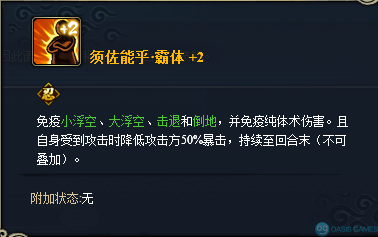 +2: when Madara is attacked, reduce the attacker 50% of critical hit, until the end of round, cannot superposition.

This is really really strong a skill, and strongly suggest to get, this skill breakthrough gets the highest priority of all the Madara’s skill breakthough. This is really the strongest passive to hurt the attackers in my mind, even more strong than the sasuke (rennie sharingan)’s passive of cause chakra scratch and chaos. We all know that critical hit is really strong, for some ninja like Tsunade and Water main they even can cause chaos by this, but if these ninja attack the madara, no matter mystery or attack, then they almost lose possibility of critical hit in same power battles. When two line ups battle with similar power, and one has critical hit while another can never get critical hit, then the result will be really clear.

So in general, though now Madara can only act as a support ninja, after skill breakthrough no matter his ability of damage making or support others all get great promotion. So get a 4 star Madara and get him breakthrough to enjoy the new Madara~~

The priority of skills:

not sure Madara passive 1 works how you think it does, most likely its should be stated as such,

so long as madara is alive konoha units will have their nin and attack buffed by 25%, In addition if a konoha unit casts a mystery madara will generate 40 extra chakra and recover 20% of his life.

A different type of op then whoever casts get the healing, since this means madara can go from near dead full heath if mysteries are spammed and he's not on fire, and works much better in down to 1 unit both case then say so6p naruto since leech requires easy to damage targets to work well, while madara can heal much more at that point ( as quick maths a 50k hp madara can heal 10k every other round, for naruto to match that he needs to deal 20k damage, which is not happening at that point).

The second Hogake, a term for the leader and guardian of the Hidden Leaf village, Tobirama succeeded his elder brother Hashirama after his death. Opposing his brother's idealism with pragmatism, Tobirama was a realist who was blunt with words and willing to take actions he deemed necessary McDVOICE

QuickPayPortal is one of the easiest Bill Payment portals in the USA. Paying the Medical Bill in the United States is easy through quickpayportal app. The main ob

Hotstar is India’s largest premium streaming platform and provides users with access to sporting events, TV shows, and movies. Downloading the Hotstar app on an Android smartphone is very easy. The app is available on the Google Play store. Get hotstar app download apk details here.