So recently CN server has release Edo Madara will he able to compete with Naruto(Six Path) ?! 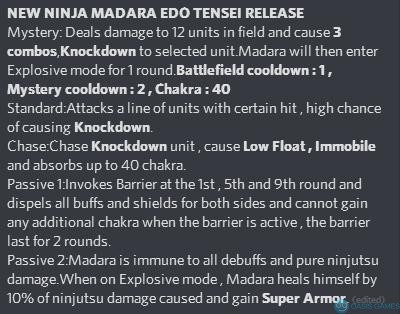 Ahh ahh i cant get enough of his animation.

I personally don't think he will. I will list some reasons below.

-His chase doesn't take away buffs

-He has no immunity

-He doesn't dodge or start with super armor so he can be controlled by Naruto with high ini.

Edo Madara does have a nice kit though. First ever passive barrier that comes back. I am also fairly sure he will have much better damage output then 6p Naruto (just a guess). His mystery hits 12 units with 10% leech, so he will be amazing in 3v3 and GNW. Also gains super armor afterwards. There is still a chance maybe his mystery is undodgeable and if that's the case he will be even better. Personally don't see him as a hard counter to 6p Naruto, but he still have a great kit.

EDIT: Corrected Madara does have immunity

He also have no reset :)

Fun fact, if you place the madara first in your team, his barrier will go up first, then you can proceed to buff your team while removing opponent's buffs if you have more initiative.

No I don’t think so, he only heals on explosive mode and it’s every 2 round.naruto can heal almost every round

He did have immune to all debuff and he is immune to ninjutsu which counter 6p naruto's standard attack and chase(pure ninjutsu dmg).

This mean that naruto cant leech hp with standard attack and chase.

Not to mention that naruto mastery deal both tai and nin dmg, since madara able to negate nin jutsu dmg.

One thing I liked about his kit is certain hit(unavoidable) standard atk and high chance knockdown then proceed to chase.

what are you smoking? it clearly states he has immunity to all debuffs and pure ninjutsu dmg XD It also clearly states his barrier removes all buffs and shield and is automatically recast r1, 5, and 9, and last for 2 rounds each time.

Dethrone doesn't mean the same as counter, though, most people are comparing the 2 to see if one is better than the other. The whole point around immunity was only brought up because 6PN also has it, so your input is a bit, well, not at all on point XD

As for the whole immune to pure ninjutsu, you're looking at one aspect instead of the entire ninja, yes, Sasuke and Tendo can't do much vs 6PN, but they were release ages before, 6PN, while Madara is an upcoming char. So it is your argument that is invalid.

He can reset with Fire main passive, Secret Jutsu users, which that doesn't require any extra standard as long as he kills a unit. Or Wind dance.

This edo Madara is better than Founder anyway, if edo has his barrier up , Founder's chakra passive won't work, therefore you can't bombbard your team from his chakra passive. He dosen't need to play with full buff teams, when he's immune to debuffs and ninjutsu, which Founder is weak against both.

You take both dmg if it's Tai/Nin mystery, you don't negate one of them.

Only naruto standard don't do dmg.

Interesting fact: you can leech even if target you hit is immune to type of dmg you deal. Try it on madara founder with any tai ba

I meant no ba

Yes he does. You fail at reading.

"Madara is immune to all debuffs and pure ninjutsu damage.When on Explosive mode, Madara heals himself by 10% of ninjutsu damage caused and gain Super Armor."

Madara is immune to all debuffs and pure ninjutsu damage. + When on Explosive mode , Madara heals himself by 10% of ninjutsu damage caused and gain Super Armor.

It's written the same as 6p. And many other explosive characters. Madara gains HP after nin damage like 6p does after his mystery triggers. And then he gains super armor as well. He always has immunity to debuff and pure nin damage.

Yeah my bad thought it was only when in explosive mode I read it weird. Still not to sure he will replace 6p Naruto. Would be cool if his mystery is undodgeable, but that would be a bit broken with him hitting 12 units.

Thanks for correcting me!

I didnt know that haha i guess you learn something new everyday huh.

Are you sure about this?

By reading it seems more that his barrier gets released as soon as round 1 starts, but other barriers, shields and buffs are applied before the beginning of the battle.