Gathered friends, I have been absent for a long time. And that's okay. Cause I probably won't * around for long. But now I have returned, with new evidence that Aoba of the Door truly is the person who controls the entire Narutoverse – and the entire game. 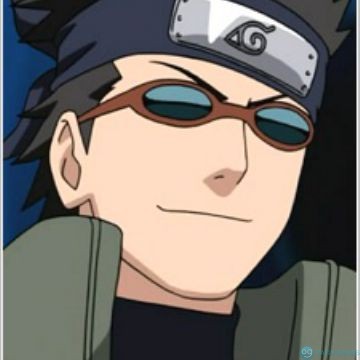 Aoba is actually...
the one pulling the strings of the plot. Everything has gone according to his own diabolical plan, and here is my proof (If you want a TLDR version, go to the bottom):

In chapter 93 page 7, Aoba makes his first appearance. He is among the Jonin which are at the meeting concerning Hayate's death and Orochimaru's involvement. This starts the thought process of how Orochimaru should be dealt with, along with the Leaf Village's benefit in mind. He already knows that Orochimaru is interested in this years students at the Chunin Exams, and so he thinks of the Leaf Ninja that would push Orochimaru to come to this years Exam. The only two would be the survivor of the Uchiha Clan and the Nine Tails Jinchuriki.

This plan started chapter 144 page 11. Itachi had just returned to the Leaf Village after the Third Hokage's Death, only to be confronted by Kurenai and Asuma, who were than saved by Kakashi and Guy. After they battle, Itachi and Kisame retreat while Kakashi is defeated and has to take a nice stay in the hospital. It is there where Sasuke enters the hospital room with the four previously mentioned Senseis, only for someone to enter the room and scream that Itachi had already came back to the Leaf. Sasuke runs out of the room, blood thirsty and ready to kill Itachi, but who was the one to say that Itachi had returned? It was none other than Aoba. Aoba, knowing full well that Itachi would easily outmatch Sasuke, who would eventually leave the Leaf to gain greater power, via Orochimaru.

Now you may ask why Aoba would do such a thing, but here is why. He knew that the Akatsuki were ready to go for the Jinchuriki, and he needed Naruto to become even stronger so he wouldn't be captured. Most of the known Jonin (Non-Fodder Jonin's) respect Naruto, Aoba being no exception does not want Naruto to be captured. He also knows about the rivalry between Naruto and Sasuke, as well as the close bond between the two. Now that rivalry has turned into a quest to bringing back Sasuke, and to do that, he would need to do it forcefully. Naruto would have to train really hard to beat out whatever training Sasuke was undergoing with Orochimaru, and therefore weakened the chances of the Akatsuki ever capturing Naruto.

The next time Aoba makes a major appearance is in the Hidan and Kakuzu arc. He is sent along with Choji, Ino and Raido on a mission to hunt and kill the Akatsuki. During the search, Asuma, Shikamaru, Izumo, and Kotetsu battle Hidan and Kakuzu while they call for backup. That backup is Aoba's team of Choji, Ino, and Raido. Unfortunately They are not able to make it in time to save Asuma, but Aoba already knew this. He knew that in order for Naruto to overcome this threat, he would have to battle them on his own, and to make them even fiercer, they would have to make one casualty. In chapter 327 page 16, Aoba proclaims that he will hold the enemies off, but what are his real intentions? To test the ability of the foes of whom Naruto will soon have to encounter, and allow them a safe escape for that soon encounter. His plan is cut short by Pain's interruption, allowing them to leave before he is able to test their strength.

In chapter 343 page 14, Sasuke takes the next step in order to take down Itachi, battling and killing Orochimaru. Aoba needed a surefire way to dispose of Orochimaru, as previously mentioned, and Sasuke was the way. Not only was Sasuke leaving the Leaf Village to power Naruto up one of the reasons for Aoba's actions, but to prevent any further damage Orochimaru could bring to the village as well. He knew that Sasuke would have to get rid of Orochimaru in order to kill Itachi, and used that to his advantage.

Once Itachi died right in front of Sasuke, he was confronted by the Masked Man who called himself "Madara Uchiha". This is obviously a ruse to trick Sasuke into trusting him, as fellow clan members should. Aoba needed to keep Sasuke away from the Leaf Village to continue Naruto's growth, therefore he conspired with the Masked Man to keep Sasuke away from the Leaf Village. Naruto did indeed grow stronger, and even defeated the ever lasting threat that was Pain, the Akatsuki Leader, although at the price of the entire village.

War was almost imminent, and Aoba knew that there were only two Jinchuriki left, one including Naruto. To keep him safe, he had to tag along in the mission, making sure that he indeed did receive his Tailed Beast Training and he was not captured. In chapter 507 page 13, he had been reading Kisame's mind to find information on the opposing sides war strategies and information. One thing he did not expect to stumble upon was a memory of the Masked Man without his mask. His deal that he had made previously with the Masked Man was to keep Sasuke away from the Leaf Village, but Aoba was not allowed to ever find out who was behind the mask, or it would result in the Masked Man killing Sasuke, ending Naruto's determination. Aoba then forcefully alters Kisame's brain waves to a state where he can wake up from his unconscious state, where he would be able to end the mind reading jutsu without any questions being asked by anyone around.

Lastly, in chapter 514 page 7, Kabuto makes a remark saying, "Aoba's with them, too." signifying that he knew that the Masked Man and Aoba were conspiring and Sasuke was involved. Kabuto's ultimate goal has been said to be Sasuke, and Aoba having a close connection with Sasuke due to this scheme he has made with the Masked Man makes him a big target. As Aoba is about to read Kabuto's mind, Kabuto makes another remark, "You've fallen farther than I have." impying that he has recognized that Aoba has conspired with the Masked Man, and despite his good intentions, he is falling to the dark side. Kabuto then enters a snake like form and tries to capture Aoba to retrieve information of Sasuke from him, Aoba, one step ahead of him, purposefully falls into Kurotsuchi's Jutsu, not allowing for his capture. Aoba continues to stay on the island until he is entered in on the Intelligence squad, therefore separating him from Naruto.

Aoba and the Masked Man have one common wish, the battle between Naruto and Sasuke to occur. True peace will be brought once the conflict with Sasuke has ended, and to do that, Naruto has to be the one to battle, defeat, and and bring Sasuke back to the Leaf Village. Once everyone is able to live in a world without hatred, Aoba's plan will then end. According to the Official Data Book, Aoba's favorite phrase is, "Just as planned", signifying his want of true world peace. Aoba has been the one that controlled the evolution of Naruto and Sasuke's rivalry, along with the peace of the Ninja World in one inhumanely possible plan.

Aoba controlled Sasuke and Naruto's rivalry to the point where World Peace would be the outcome.

Man, if you don't like this kind of threads then you better not open it and specially don't make any efforts to comment or reply in this kind of threads .. This is General Discussion where all users are free to talk and tackle topics about Naruto Online and the Anime Series .. As long as the topic and discussion is clean and nice, then there's nothing to worry about .. If this bothers you then again, don't open threads like this, if it happens that the title is confusing and the content is like this then go and close the tab .. To make my speech short, "Mind your own business" ..

Anyways, good to see you back scarbucks

What the...No need to create bicycle again. It's anime, not Sherlock Holmes series.