In fact in my mind this is a really strong ninja, and can really cause great control debuff or protection effect. He’s yamato(anbu).

For the different design between our version and the Chinese version, the break through Ay fourth raikage is not popular cause before his skill trail the kakuzu is already break through, so as one of the best support of Ay the yamato is not such popular in our version. But I have to say that yamato is a really strong support ninja, so now let’s start our *ysis. 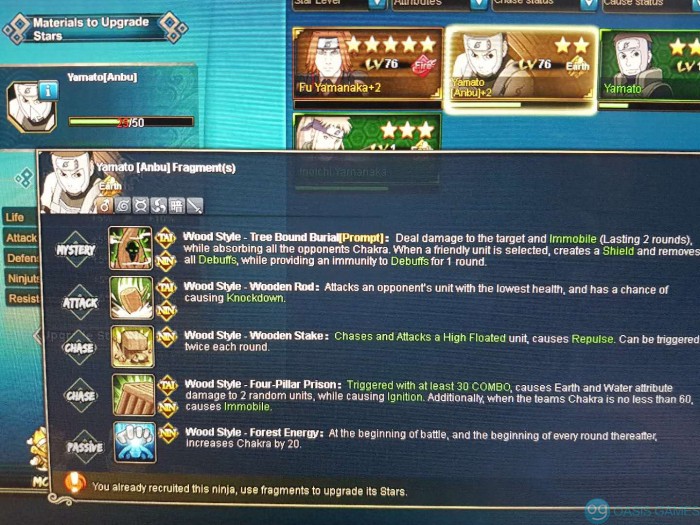 First, mystery. Deal damage to the target and immobile(lasting 2 rounds), while absorbing all the opponents Chakra. When a friendly unit is selected, creates a Shield and removes all debuffs, while providing an immunity to debuffs for 1 round.

This is a really strong skill. When we select an enemy unit, yamato can cause the enemy immobile for 2 rounds, 2 round immobile and 1 round is absolutely different, 2 rounds immobile means at the next round, when all your mystery are reduce 1 round cooldown time, the enemy is still controlled, and you have one extra round to cause chaos or damage or other things when the enemy can do nothing. However, we have to see that the immobile and chaos can only exist one on the unit, so when the yamato already use mystery to control someone remember not cause more immobile or chaos on that unit, for these debuffs will conflict and the new one will replace the old one.

When we use the mystery on our unit, it’s just the same as the mystery of gakido before breakthrough, immunity is how strong a mode that I do not need to explain more.

And also something maybe ignored, it can scratch all the chakra of the enemy, which can make your enemy cannot wait to beat you after your acts, for no chakra. This is really strong an effect.

Attack is kind of normal, attack the lowest health enemy unit, has a chance of knockdown causing, nothing new and really strong. And there is a risk that the unit controlled by yamato becomes the lowest health, and his own attack cause knockdown and chase attack use new control debuff to replace the strong 2 round immobile, that is really a big waste.

Chase attack, chase and attack a high floated unit and cause repulse, can be triggered twice a round. Twice a round is good, but no other cancel shield or some effects like this, still not strong enough, just a normal chase attack, strong than the only one time and no extra effects chase attacks.

Chase attack 2, chase at least 30 combo, cause earth and water attribute damage to 2 random units, while cause ignition. Additionally, when the team’s chakra is no less than 60, cause immobile.

Really strong a chase attack, although 30 combo is kind of difficult to achieve, but the strong effect can make this not a shortage. First, cause attribute damage to enemy units, this may useful in ninja exam, for there you’ll find someone immunity with all damage except some special attributes, this may useful that time. And also, cause ignition. Ignition is a really great debuff, for you only need to set one chase attack to cause ignition for it cannot superposition,

And, when the chakra is no less than 60, it can cause immobile to the enemy units, this means that one chase attack can cause attribute damage, immobile and ignition at the same time, really strong a chase attack though it needs 30 combos.

As a summary, yamato can cause a great immobile, can cause ignition, can cause immunity shield to friendly units, and also can provide a huge amount of chakra. If you already own this ninja, try to use him in your lineup, he won’t make you down.