China recently just got them and they also put them in grocery store for 200 sun scrolls each. Lets hope Oasis does the same for us. I do think it's weird that FR got them before CN though. I do agree with most people though this is a bad idea. We are missing so many features and skillbreaks, so why is adding did this need to be released now? We need to catch up to CN and not try to add things they just added to the game.

Ruin this game more i will be happy to quit

Im telling u guys for a few months already - this game is dead! They dont care about nothing but milk players before mobile version go worldwide. After that this game will be done, believe me. So if u still enjoy it - play it and stop complaining. If not - better quit right now, cuz this game will not be as good as 1-2 years ago.

What happened to 3v3 function? Been well over a month since we seen it last.

"Simply add exp to the top rewards" will only make situation worse. Tbh i don't see a f2p starting on server opened 2y ago and being competitive without a lot of patience. With spenders it's different situation.

At the end that whale will have to fight with tactics and no auto cuz f2p and low spender will quit. as it goes now my sage soon will be starter lvl to 105, and gl to all those low lvls against 400-700k guys. 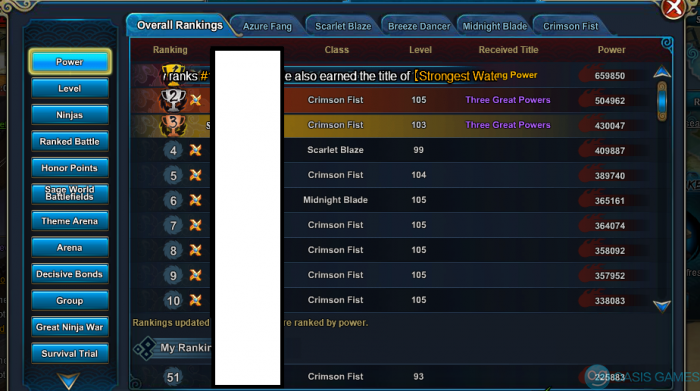 just BP rankings from my server. 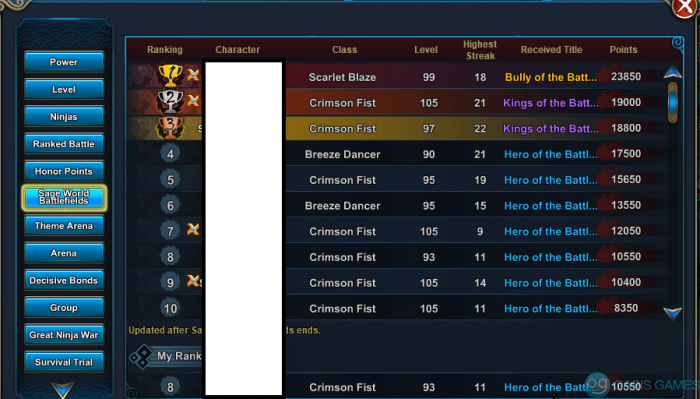 % tactics are an ingot ba

Does anyone from oasis actually post/look here or is it just the mods? I have a hard time believing that either a) oasis takes the mods seriously or b) that oasis is actually given the real feedback from us or c) they don't care what we say. It's almost embarrassing at this point how obvious it is that they are only interested in releasing features that will make them more money opposed to having a complete game. The broken translations, the skipped features, the missing skill trials, the increased number of stars to skillbreak on some ninjas (i.e the useful ones).Frankly this will be my last month spending, my little $60 a month is a drop in the bucket to some of these whales but since its evident that either won't see or don't care about what I'm saying here then I have to vote with my wallet. XIV has an expansion dropping soon so it will be a very easy transition to go to a game that isn't about milking every last cent from its playerba

but since we had 1-2 less years to farm things in comparison with them the consequence should be that if they add something that appeared yesterday in CN then the lower level item since tomorrow should cost 1/4 of what costs in china, otherwise is not possible to catch up.

what do i mean?

but is not fine if level 7-10 refinements from the following second continue to cost as much as they costed up to today.

Power won't fix it. I remove stuff from my pos 2-4 and get a lower power....and no matter what u gus say they can't change 10 cent coding to alter events that much...waste of time arguing over daily events. Hardly see any f2p benefiting from lvl freezing...only heavy spenders tbh. Some people are busy so they lvl freeze and whale hard so...

I swear these fkin morons makes me sick. Are they low on pocket money or wtf. Fkin idiots missing a bunch of content , nins, BT , SB already from the previous versions but they want to reach up to the chinese servers level? They are fkin insane. Way to kill the game in my opinion. Greedy *s.

Well sorry for you, lil' kid, but are coupons not ingot the materials need :3

Even the 1k advance refine i still cant reach, tf just that orange refine.. only p2w will reach it.. T-T poor f2p

I have a feeling even whales might start to go away from this game after this update. And if whales start to leave, game won't make as much. Unless Oasis makes things up VERY good, this might be beginning for the end for all us us...