The time has come, this is the endgame, where all of us should stop playing this "milking those money till no one else play game". Good luck guys, hope you can find any satisfaction on this game.

God, you are so greedy, we still do not have functions from version 5.0, breakthroughs from 4 stars, but when you introduced a new function in China (for p2w) you instantly introduced it to us, thank you so much. 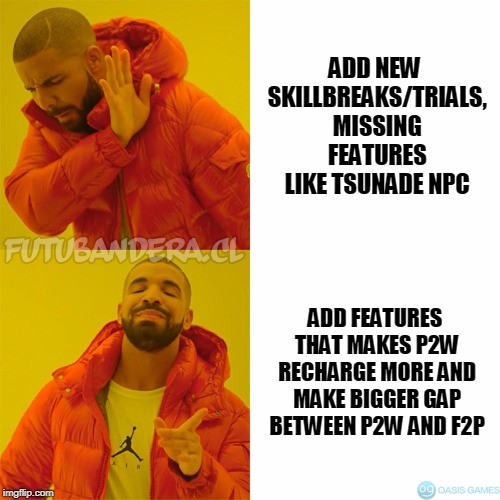 FUKU AND NO EVENTS WTF OASES???

STOPPP, PUT AGAIN KGT OR LUCKY BOARD WITH FUKU

PUT HIRUZEN AT LEAST IN THIS * EVENT

first time we on par with china cool

Welp, I hope you devs are paying attention, every single reply is negative for these new dumb refines. Almost ALL OF US are way behind on adv. refines, and this is only gonna make it worse.

Heck, who am I kidding, you guys never consider our complaints. I suspect y'all are Sadists.

so... are we gonna, at least, get some shin fragments? since a lot of servers that you guys DONT WANT to merge cant fill the group event...

Finally Oasis acknowledges who are the real super player. Add a super-duper-hyper-mega-players section for people who use 20k ingots. xD

Good may daily sign in ninja always wanted to have that ninja.

How many players in this version have fully upgraded refines? You are just letting game die with your actions. no need to add something brand new that only brings more disbalans to the game. Adding those skipped features that worked well when added by mistake would be nice start. Have been trying to do my best as f2p reached 200k finally, 20k+ stats but you're killing this game.

P.S. would be nice to see new refines in the sage for top 3 rewards at least 1/3 of adv. refines per rank, with adv. refines too, ofc.

Guys why not add a new scrap in Groceries Storage Room?

well we will see some figth with 1mil BP lol

I guess I can finally start to realize my dream of quitting this game for good, just few more bullsh1t updates and It wont take long to feel pointless to play this game to the point of actually quitting it. Gai a$$ Oasis and marketing department. Glad I never spent anything in here but tried to grind as a free to play, not that I even could spend anything to begin with, but it taught me how pointless it is to invest into this game.

Have to look up how to contact European and US gambling commissions to investigate and crackdown on OG and their practices regarding gambling within the game, at least it's something to start making this game fair and good by starting to restrict the gambling events within this game because the game is played by children as well.
It wont change how Tencent makes the events, but it will affect how events are made for EU and US, or whether those events will even show up at all here and will require a new approach to replace those events without gambling, because real money is being invested at high amounts.

This who sh1t show has dragged me angry with how unfair and unbalanced the game has become, not like it was already from start (which it was, already from start), but it has gotten ridiculous that I might as well want to inform the governments about this so that they can properly investigate and deal with this, and create rules and restriction to make it more friendly. It can easily be ba