Time for a versus battle, but instead of characters we will be *yzing two of the most powerful genjutsu in the entire series. The comparison between the two will be determined by their nature, effects, use in battle, drawbacks, and other factors. Also, any and all the information I will be presenting here is from official sources, manga, anime, and feats. Nothing will come from my own head-canon. So without further ado, let's begin with the first OP genjutsu introduced in the series: Tsukuyomi 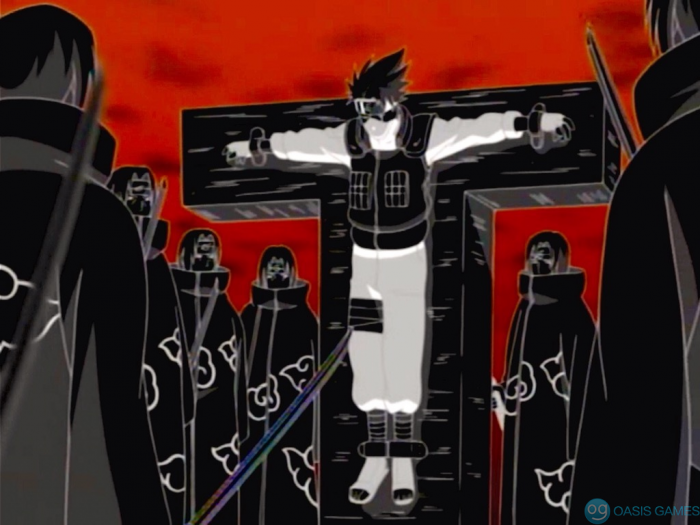 As I mentioned, Tsukuyomi was the first powerful genjutsu introduced in the series. Now, this speaks volumes about it's power since it was first seen during part one of Naruto and yet it was still considered to be very powerful even until the end of the series.

HOW DOES IT WORK

Tsukuyomi is one of the abilities possessed by the mangekyou sharingan of Itachi Uchiha and works much like any other optical genjutsu would. The user of the jutsu will need to establish eye contact with their intended target. If they succeed in doing so, they will be able to trap the opponent in a genjutsu world of their own creation in which they are in full control of time and space. Basically, they become a god in the genjutsu world they create.

The type of illusions they can make the opponent see varies and is only limited by their own imagination. Itachi showed two cases of using Tsukuyomi wherein we get a glimpse of what he made the opponent see:

In one instance, Itachi trapped Kakashi in Tsukuyomi in which he was continuously stabbed by multiple copies of Itachi. This lasted for only a couple of seconds in reality but from Kakashi's perspective, the mental torture lasted for 72 hours.

In another instance, Itachi used Tsukuyomi on his former girlfriend, Izumi Uchiha. During the span of a pico second or 0.000 000 000 001 in reality, he made Izumi experience decades of her living out a happy life with him until the end. That's almost 50 years or even more worth of life experience squeezed into such a small time frame.

HOW CAN IT BE USED IN BATTLE

We only ever get to see Tsukuyomi being used three times in actual battle but in almost every instance, the battle nearly ended right then and there. This is rightfully so because it takes a large amount of chakra to use Tsukuyomi and would require the user to rest after using it. This was shown when Itachi was coughing up blood and is clearly staggering after using the jutsu on Sasuke during their battle 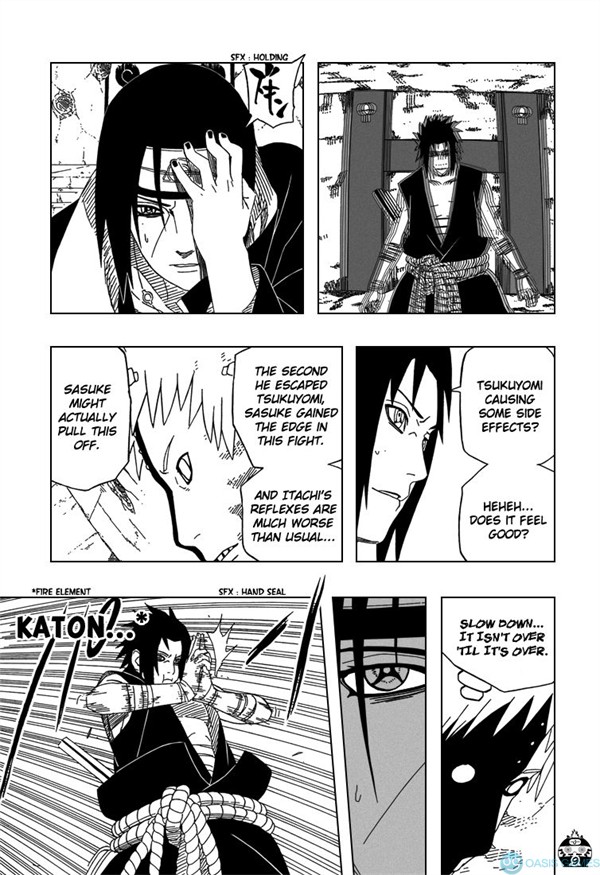 However, despite this huge drawback, Tsukuyomi is almost always guaranteed to end the battle given the huge mental trauma it causes. Only characters with huge willpower or who possess the mangekyou sharingan are able to resist its effects. 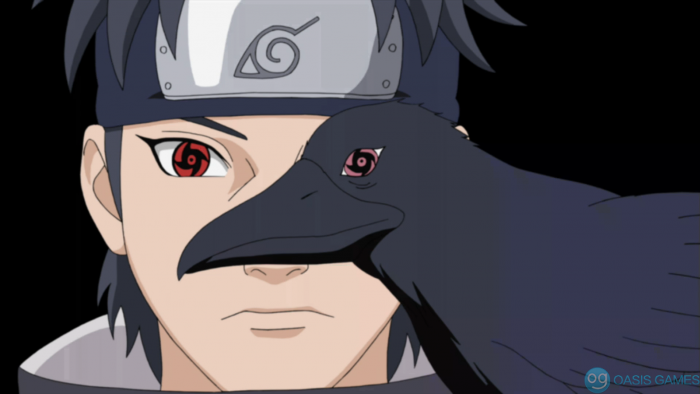 Kotoamatsukami is hailed as one of the most powerful genjutsu in the series (second only to the infinite tsukuyomi). Although we only get to see it used twice, the power this jutsu contains is clear cut.

HOW DOES IT WORK

Kotoamatsukami works by entering the person's mind and manipulating or downright changing the memories they have into whatever you desire. 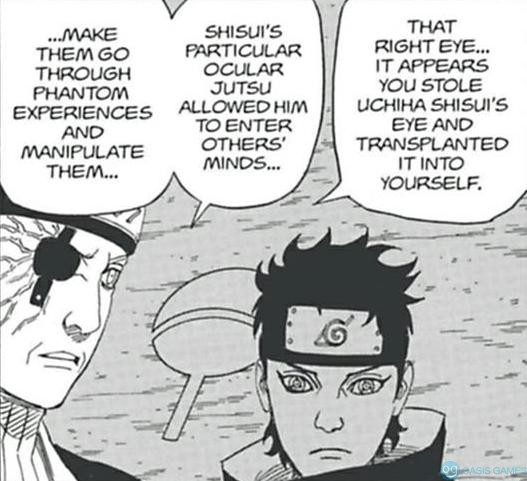 The user of the jutsu doesn't seem to require eye contact as seen when Danzo put Mifune under Kotoamatsukami despite the fact that he still had Shisui's eye covered in bandages. The user merely needs to have the target in his line of sight (i.e. be able to see their body or even feet) to put them under the jutsu.

Also worth taking note of is the fact that a substantial amount of time would need to pass in order for the eye to fully recharge to be usable again (10 years). This can be counteracted by either obtaining Hashirama cells to reduce the recharge time from 10 years to a single day, or be Shisui himself.

HOW CAN IT BE USED IN BATTLE

Due to the nature of the jutsu itself, it's not really a battle oriented jutsu but rather a covert type. Altering an individual's memories while you are fighting with them will prove to be difficult as you would have to think of how to alter their memory in such a way that they would not question themselves on why they are currently fighting you once the jutsu takes effect. To back this up, Mifune was put under Kotoamatsukami but when told that he was under genjutsu immediately started to question his memories. 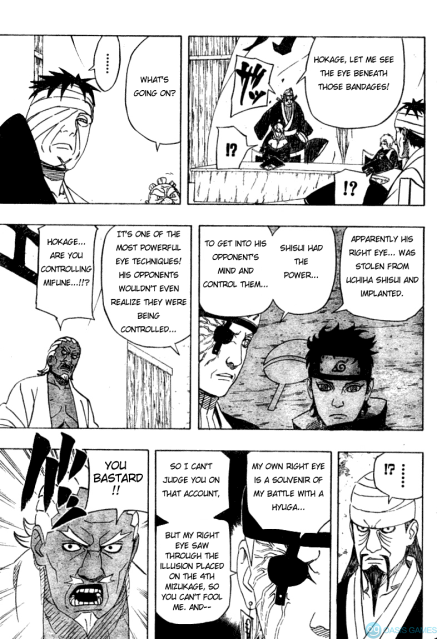 Also when Itachi was put under it, he was fully aware of being under the jutsu but didn't bother to question it since the predetermined instructions implanted within the eye perfectly coincides with what he wants to happen. Meaning, that for the jutsu to take effect, the opponent would either have to be totally unaware and not be presented evidence that his memories are false, or the opponent may be aware but choose to be put under it regardless.

This indicates that a situation or individual or even an ob

Tsukuyomi is designed to be a potential one-shot genjutsu that can be used on the spur of the moment and in the heat of battle. Kotoamatsukami is the perfect jutsu for manipulation, assassination, or political takeovers.

In terms of battle usage, Tsukuyomi takes the edge. However, Kotoamatsukami comes out on top in sheer jutsu power. Take note that Kotoamatsukami doesn't place people under genjutsu, but rather outright manipulates their memories. Meaning that it cannot be detected by detecting a change in chakra flow on the target's body since the chakra flow will not change. Kotoamatsukami, when done with prior planning, has the potential to be the most powerful jutsu in the series and shines when put to use in the right situation.

Tsukuyomi and Kotoamatsukami doesn't make you blind; at least not immediately. Like all MS abilities, overuse will eventually lead to blindness but they are not like izanagi or izanami that will require the sacrifice of your eye.

Are you talking about the sasuke pre-shippuden or the fight when Itachi died? Because when he first used Tsukuyomi on Sasuke pre-shippuden (when he and Kisame interacted with Jiraiya for the first time) he was not severely weakened after he used Tsukuyomi on Sasuke. It was only after he used Amaterasu as well to escape Jiraiya's toad trap that his eyes started to bleed.

And remember that this was pre-shippuden, meaning his body was still relatively healthy compared to shippuden where he could barely stand after using Tsukuyomi once.

Anyway, the point still stands that Tsukuyomi will consume a lot of chakra from the user; it's just that in Itachi's case, the aftermath is a lot worse.