Ladies and gentlemen, I introduce to you the most OP and nonsensically hax jutsu in the entire series: 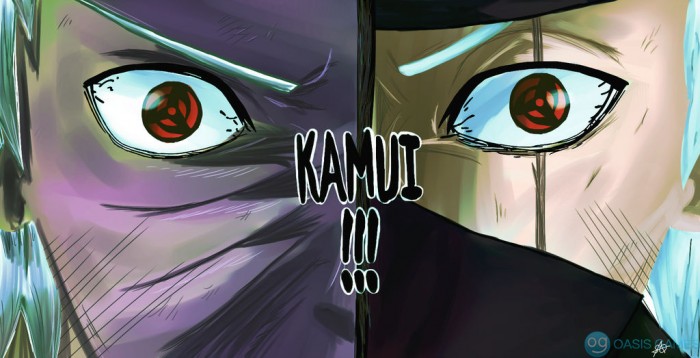 Now some of you might be thinking "There are other more powerful jutsu out there like the susanoo, truth seeking orbs, sage mode..." and you are perfectly in the right to think those abilities are powerful, but Kamui is leagues above any other jutsu in Naruto. I seriously think Kishimoto didn't think it through when he made such a broken ability. But enough about that, here's the logic why:

THE NATURE OF KAMUI

Kamui is essentially a space-time ninjutsu much like the flying raijin that utilizes the use of Obito Uchiha's mangekyou sharingan to create a portal into his own dimension. It has no chakra nature and isn't an "attack" or a "defense" type of jutsu, but rather it's a simple transportation jutsu. That being said, it can be used both offensively and defensively depending on the situation.

Additionally, the ability of this jutsu varies depending on which eye is being used. 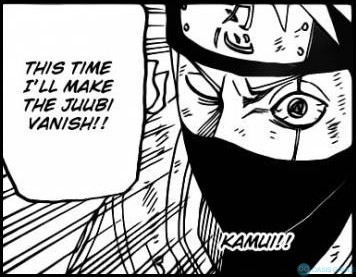 The left eye is a long range variant of the Kamui; meaning it can only be used to teleport things or people that is at a distance from the user. There doesn't seem to be a range at which it becomes ineffective as seen when Kakashi used Kamui on Deidara; who at the moment was flying above him. 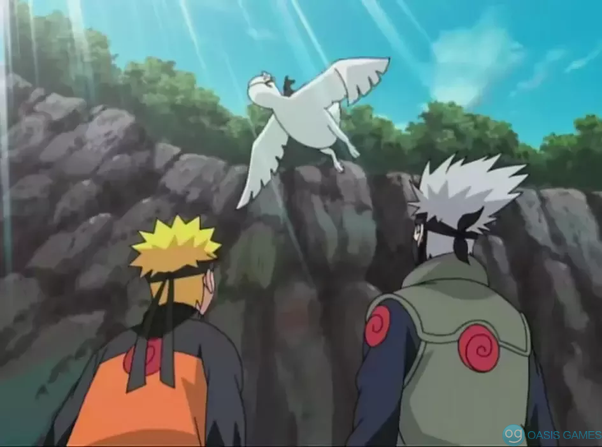 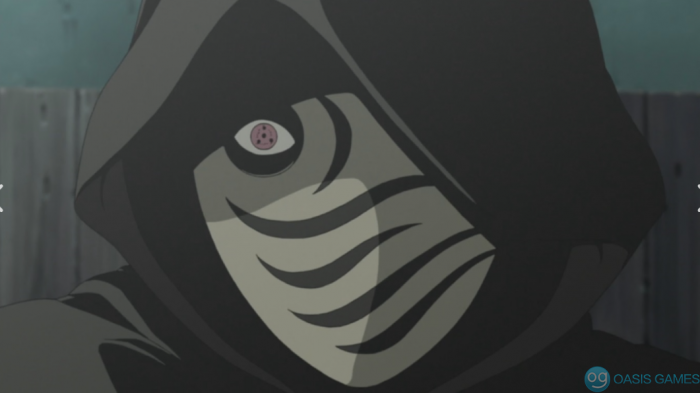 The right eye can teleport things that the user touches as well as parts or the whole body of the user. This essentially makes the user untouchable by any attack directed to them as they can make themselves intangible by sending parts of their body to the kamui dimension. In addition, they c*so store weapons inside the dimension which they can then launch out from the right eye to the enemy. However, the intangible form can only be maintained 5 mins at a time but this limitation becomes a non-factor as there are very few shinobi who can dish out an attack that lasts for 5 whole minutes.

WHAT MAKES IT SO POWERFUL?

If it wasn't already apparent, then let me provide an overview of what makes this ability so powerful:

- Intangibility making yourself immune to various forms of attacks

- An instant K.O. oneshot if you manage to touch and teleport your enemy into the dimension

In addition, the amount of chakra it uses seems to be very little as both Kakashi and Obito kept spamming Kamui all throughout the arc. And if that isn't enough to convince you, take a look at this: 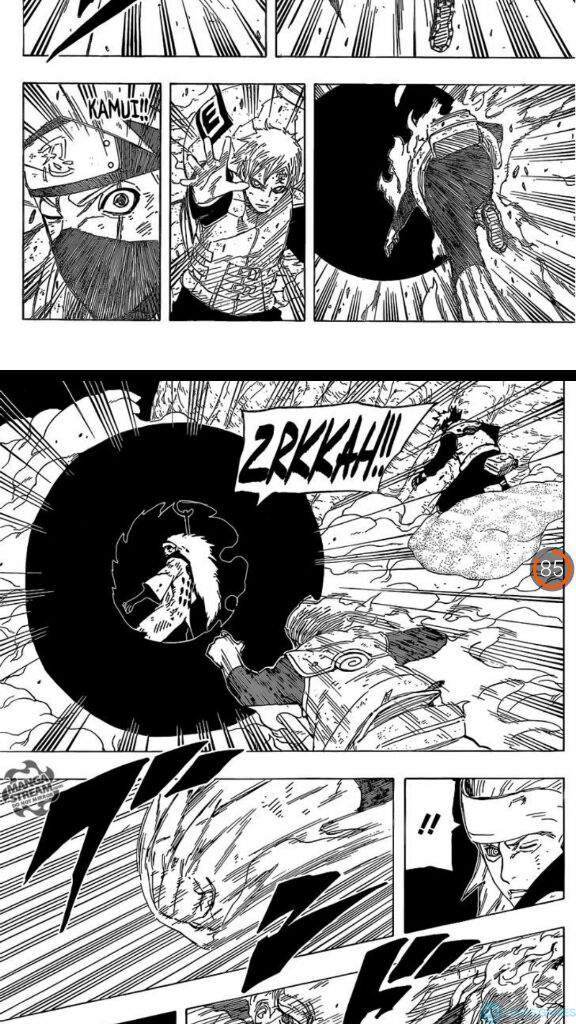 Kakashi was able to Kamui a large hole on a TRUTH SEEKING ORB BARRIER. This is a significant feat as it is stated that the truth seeking orb takes on all chakra nature transformation and can nullify ninjutsu. And yet, Kakashi was able to use Kamui on something that should have been unninjutsuable (not an actual word). This puts Kamui above the ultimate trump card of six paths chakra users.

HOW DO YOU COUNTER IT?

You don't. There is no defined technique or jutsu that can counter Kamui. The only things that would give you a chance to beat someone that uses Kamui are these:

And that's it. You basically just have to be fast enough to catch the user before they can either snipe your head off or make themselves intangible. Minato made this very freaking clear: 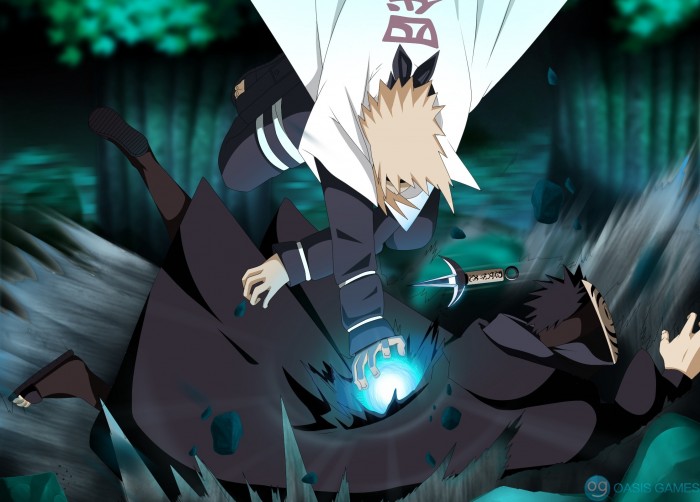 And let's not even talk about this monstrosity 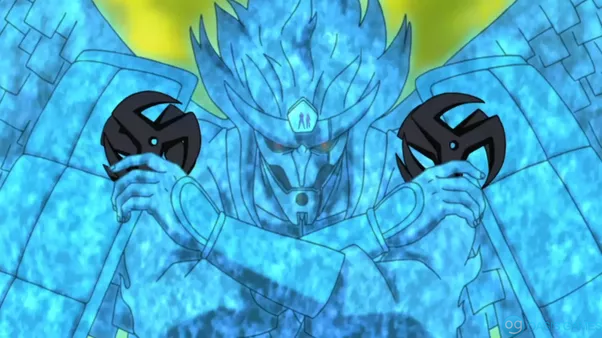 It's not even funny how *ly broken this ability is. Just with this ability, you'd basically be able to beat almost everyone in the series given they are not substantially faster than you or has a billion paper bombs that explode for ten minutes straight.

Anyways, that's all from me. I was thinking about doing a Kakashi vs. Naruto thread but it seems like a lot of work. Let me know what you think about this; do you agree or do you think there is a more broken jutsu out there. I would love to hear about it.

P.S. If you want to engage in a debate on what could beat Kamui, please do so by messaging me instead to avoid the potential of this thread becoming cancerous.

P.P.S. Before anyone says it, talk-no-jutsu doesn't count.

All of this is good, sure. BUT if we're being honest the most broken jutsu is Thousand Years of Death.

It is a secret move, the opponents would never see it coming.

The distance and power put into the move could push the jutsu so far up the * of the opponent that they could actually die from a rupture on the inside.

If opponent clenches, stopping the jutsu, then you will instead launch them into actual space.

The ULTIMATE taijutsu attack. It could destroy a truth seeking orb because as you said, they are "unninjutsuable." Thousand Years of Death requires no nature release, however the prospect of a fire style sounds pretty great. Endless possibilities.

The move requires little prior training and anyone can cast with no hand seals.

This is why Thousand Years of Death is the most broken jutsu.

Okay I concede. The thousand years of death could have beaten Kaguya if Kakashi used it on her. 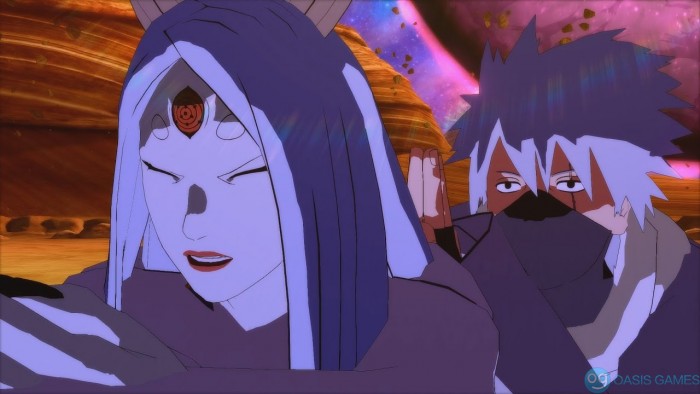 The most broken hax is kotoamatsukami.

Reverse Harem no Jutsu is the most broken one.

The ability itself is a BS, by a single fact that obito moved a chunk of his head (or any part of his body for that matter) to another dimension without dying, that's not how a body works. How this ability works itself is also unclear.

Sigh, why do I bother thinking about this. Nvm.

LOL that is one of the many plotholes that kishimoto kind of wrote himself into. But in a world where eye transplants are being done on a regular basis as if it's a freaking kindergarten playtime, the kamui plot hole is the least worrisome. *cough* zetsu piercing madara *cough* Guy coming back to life from the GATE OF DEATH *cough* but it's still fun talking about it in some sense.

didnt oito used kamui to come back from the "death dimension" to give kakashi the power of plothole perfect susanoo ?

You are absolutely right. He literally just said "nope" to being dead and used kamui to give itachi his eyes for a short period of time, but still enough for him to provide huge support and even damage Kaguya.

tbh, to compare jutsu/abilities like this you'd have to first make some assumptions.
1) both opponents start out prepared to fight. If not, then whoever gets the drop on the other will win almost all the time. E.g. kotoamatsukami is sight-ba

2) both opponents begin with the same ba

Given these two things, yeah Kamui is the most broken thing, period. Add in his sharingan gives Izanagi and Izanami, and almost unbreakable Susanoo... lul. Though i should note, the kamui tp is not instant like Hiraishin, so that's a major downside in battle. As in, tp'ing his body is instant, but tp'ing to another place takes a few seconds to 'warp in'.

But if you don't give those two assumptions... kotoamatsukami is the best IMO, cuz with that u can pretty much control the world. Only jinchuriki would be immune. Hell, u can probably use kotoamatsukami to turn Obito into your personal assassin xD.

You see, I initially had kotoamatsukami in mind when thinking about the most broken jutsu in Naruto but the thing about koto is that it's more of a utility genjutsu than a combat oriented one. And the standards for the most broken jutsu (at least for this thread I made) is if the jutsu is versatile enough to go up against any and multiple opponents at once, be able to adapt to many different situations, and outclass or even out-maneuver most other jutsu; and Kamui fits the bill.

A few things though:

-sight is not needed for the activation of kotoamatsukami as seen when danzo used it on Mifune without even taking off the bandage covering shisui's eye.

- Kamui is versatile enough to cover a wide range of use and can adapt to almost any technique. Literally, flying raijin and having kakashi on your team is the only known counter; and even then it's still doesn't guarantee a win.

Don't get me wrong, kotoamatsukami is a really broken ability in its own right, but again, it's also not 100% guaranteed victory to you if you use it on someone. I'll get more into why I think that is in my "kotoamatsukami vs. Tsukuyomi" thread which I'll make when I get the time.

How disappointing. You people forgot the Talk no Jutsu.

You don't need to make eye contact for Kotoamatsukami to work, who told you that? Danzo had bandages over his eye and Shisui was using it from miles away.

And I believe like the Tsukuyomi, not even Tailed beasts are safe, since Kotoamatsukami is considered above Tsukuyomi.

the problem with koto is....

a more skilled in genjutsu user would sense that something is not right, i know i'm stretching it a bit but it's true tho...

Hmm, we will never know for sure unless the author shows that in the series. Right now we know that it doesn't require eye contact, it makes the other person do what you want, and it makes them think that's what they want to do as well. So... They don't realize they are under genjutsu.

- Consumed too much chakra, if jutsu was unsuccessful, it could leave opening.

- Jutsu speed literally depends how fast you can build up chakra.