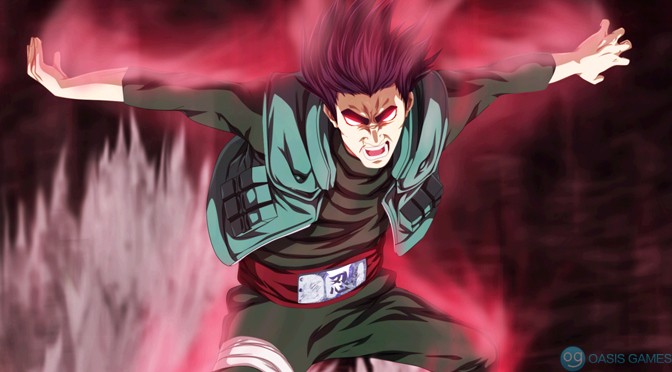 MYSTERY: NIGHT GUY: Deals extremely heavy taijutsu damage to upto 9 of the opponents unit and removes super armor of all the units in the field completely for the entire match,and causes interuption and ignition and repulse to a selected unit.This skill is undogeable and immune to interuption.Moreover if a unit is defeated by this skill they can not be revived and after usage guy will loose 20% of his original health.

STANDARD: DRAGON'S RAGE:
Launches two standard attacks at a random line of the opponent team and has a high chance of causing repulse.This skill ignores all deffences and resistance.
CHASE: SEKIZO BARRAGE: 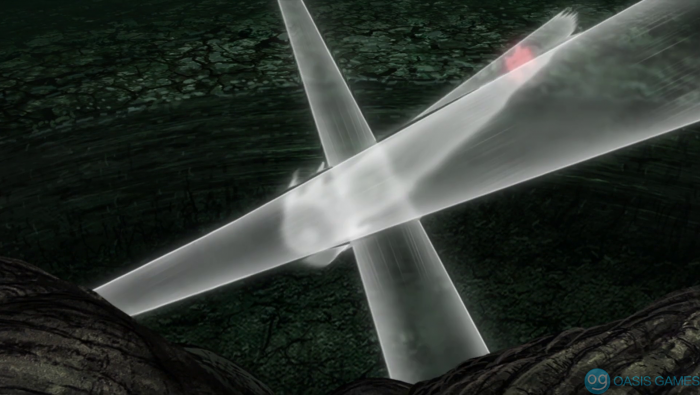 Triggered with atleast 20 combos causes immobile and blindness to upto 3 of the opponents unit and increases their mystery cool down time by one round.

PASSIVE#1: THE CRIMSON BEAST:
All of guy's attacks are undodgeable and for every damage recieved/for each life point lost guy will increase his attack and critical rate by 10%.

PASSIVE#2: THE GOD OF TAIJUTSU:
When guy is in the field all konoha units in ur lineup will have their defences and resistance increased by 40% and their mystery cool down will be decreased to one round (last for 5 rounds).Moreover for each konoha ninja in ur lineup guy will increase his attack rate by 20%.

PASSIVE#3: THE EIGHT GATES RELEASE FORMATION:
Guy is immune to all debuffs and time space mysteries (like madara five kage and kisame samehada mode).Moreover if guy kills an enemy unit his mystery cool down will be reduced to one round. 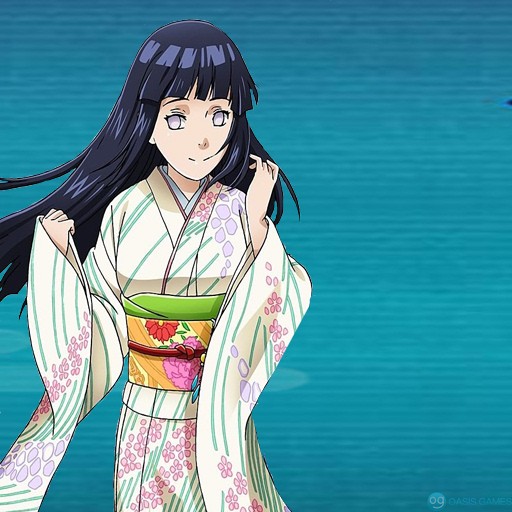 Mystery: 8 Trigrams 64 Palms: Upon use, this unit will have 3 Extra Standard Attacks, simultaneously, clear all

DEBUFFS for this unit and an aditional one from your lineup granting them immunity, lasts for 1 round.

Standard: 8 Trigrams Air Palm: Attacks a random line of units from the opponent's team, has chances of causing 3 COMBO and

REPULSE. This skill is not protected by any protective skills of the opponent.

. Mystery Skill Cooldown is reduced by one ( works once per turn ). Chase has a chance to trigger again on her Standard.

PASSIVE: Byakugan Sight: Increases TAI and NIN damage by 30% to all Secret Jutsu units in your lineup.

PASSIVE: Strong Will: Increase this unit's Defence and Resitence by 1.5% for every 1% HP lost. 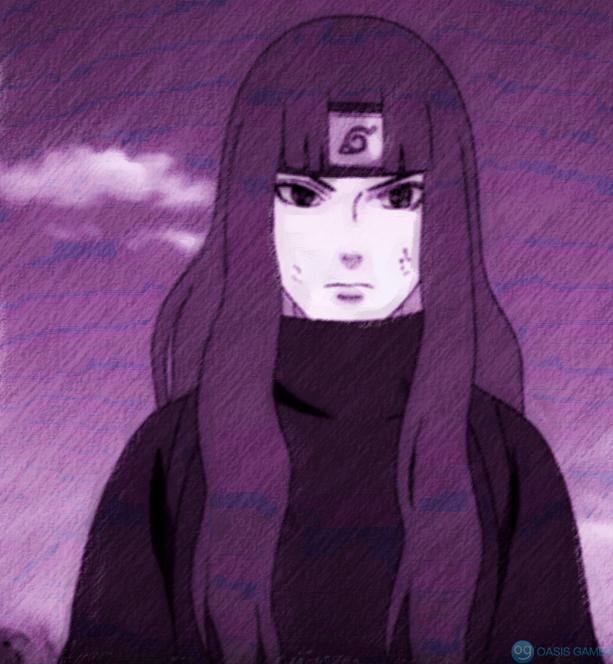 - if a team member is selected, cancels all debuffs and recovers

Passive skill: Eternal trap- if this unit dies it will resurrect next round with 40% of its original life points, additionally mystery cooldown will be permanently reduced to 0. Can be triggered once during the battle. 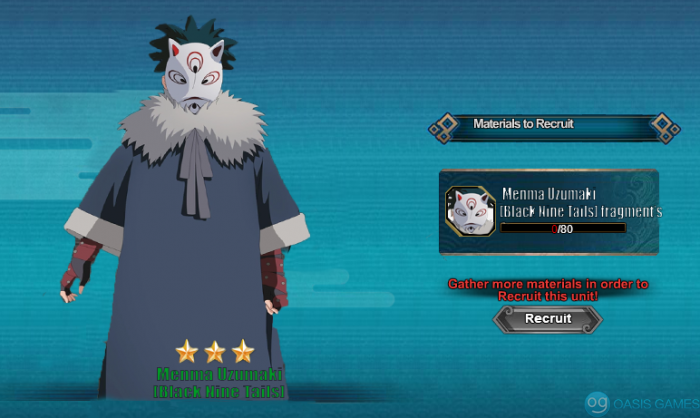 Mystery: Great Spiralling Ring: Deal damage up to 12 units of the opponent's team, causing 5 COMBO, A selected unit will suffer from Knockdown and Interruption. Upon which, Menma gains Explosive mode for 1 round.

Standard: Repulsion Technique: Deals damage up to 4 opponent units, and has a high chance causing repulse to a random enemy and decreasing cooldown time by 1 round.

Passive 1: Negative Emotions Sensing: Very high chance of evading the first Mystery skill, Standard attack or chase skill. Can be triggered once each round.

Passive 2: Black Nine Tails Chakra: While Menma is on the field any chakra absorbing mysteries, chases, standard attacks will have no effect. During explosive mode, Menma's Combo rate is increased by 30% and defense/resistance by 40% for that round. Becomes immune to all debuffs. 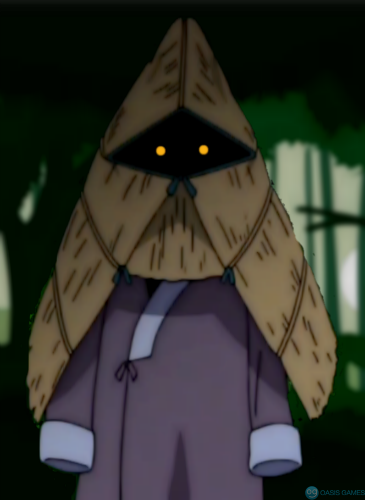 Standard: Shape Shifting: Attacks the opponents front row and absorbs a maximum of 20 chakra. Has a fixed chance of causeing 5-combo and Immobile.

Passive 1: Recorded History: A unit that attacks Black Zetsu with a taijutsu attack will have 20 chakra points absorbed from it. All pure ninjutsu damage received by this unit will be reduced by 35%.

Passive 2: Unique Body: This ninja has a high chance of evading chase attacks. Black Zetsu is immune to all Debuffs.

Passive 3: Kaguya's Will: If this ninja is defeated, will resurrect 2 rounds later with 60% of its original life points. 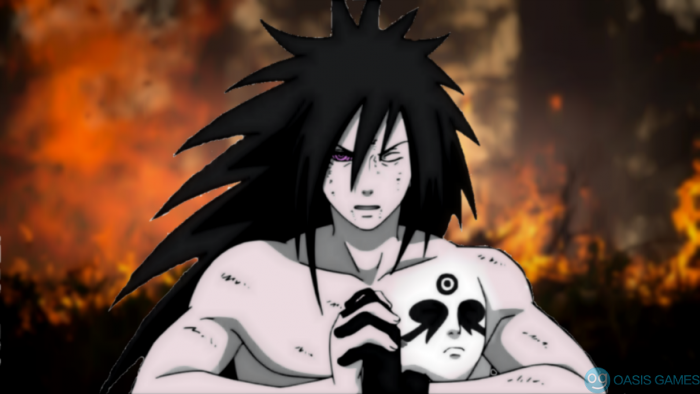 Mystery: Demonic Statue of the Outer Path[Prompt]: Cause damage to up to 9 enemies, 3-combo and Suppression of Immunity to Debuffs until the end of the round, as well absorbs all chakra. Causes Knockdown to the selected enemy.

Standard: Fire Style: Burning Ash: Attacks the up to 3 units in the opponent's front row and has a chance to cause 5-combo, Ignition, and Repulse.

Passive 1: The Love of Battle: Chases and attacks a Low-Floated unit, causes High Float and Acupuncture. If this unit has less than 50% life, this skill can be triggered twice per round.

Passive 2: Demonic Statue Chains: All Jinchuriki will have their Defense and Resistance reduced by 50% while this ninja is on the field.

Passive 3: Hashirama Cells: Before each action of a round, recover life ba 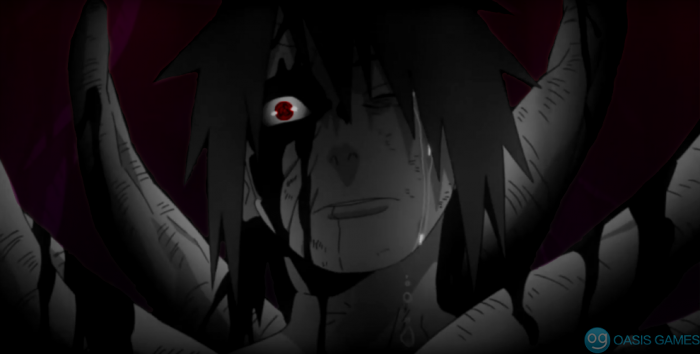 Standard: Blood-rage: Attacks a horizontal line of units. If a unit is killed by this standard attack, Obito gains an extra attack.

Passive 3: Sorrow: During Explosive Mode, Obito's ninjutsu and taijutsu are increased by 40% and will gain an extra standard attack. 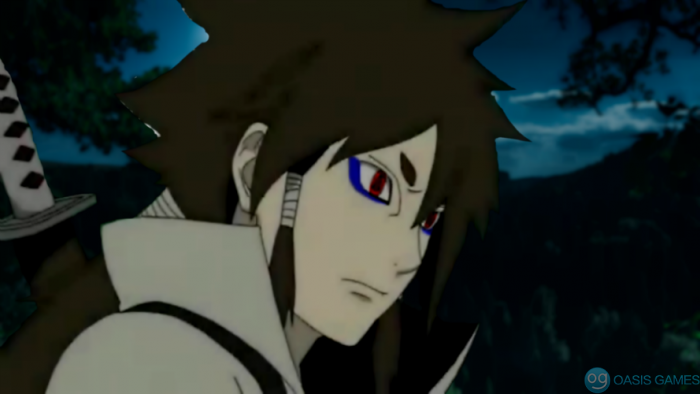 Passive 1: Fire Style: Flame Jutsu: Attacks and Chases Low-Floated unit and causes High-Float, 5-combo, and Ignition. Can be triggered twice per round.

Passive 2: Susano'o: Immune to Low-Float, High-Float, Repulse, and Knockdown. Cause Ignition when this unit lands a critical hit.

Passive 3: Power of Self: Every time a unit is defeated, the ninjutsu of this unit increases by 13%. Can be stacked up to 80%. 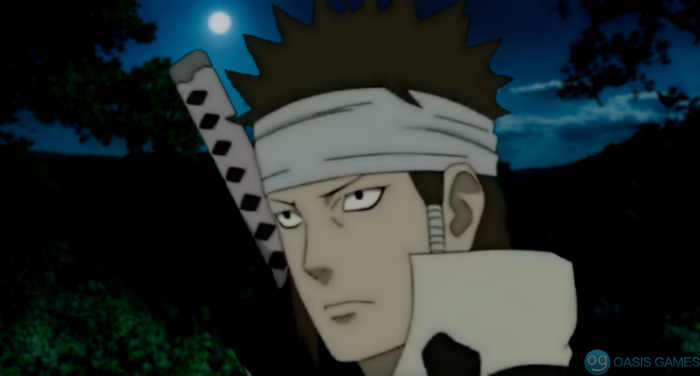 Standard: Amenomihashira: Attacks the up to 3 units in the opponent's front row and cause Repulse.

Passive 1: Truth-Seeking Ball: Chases and attack a Knocked down unit while causing Repulse, and Immobile.

Passive 2: Power of Six Paths: Asura is Immune to all Debuffs. All senjutsu units in your field will have one Debuff removed at the beginning of each round.

Passive 3: Power of Bond: All units in your field will have their Defense and Resistance increased by 40% while this unit remains on the field. 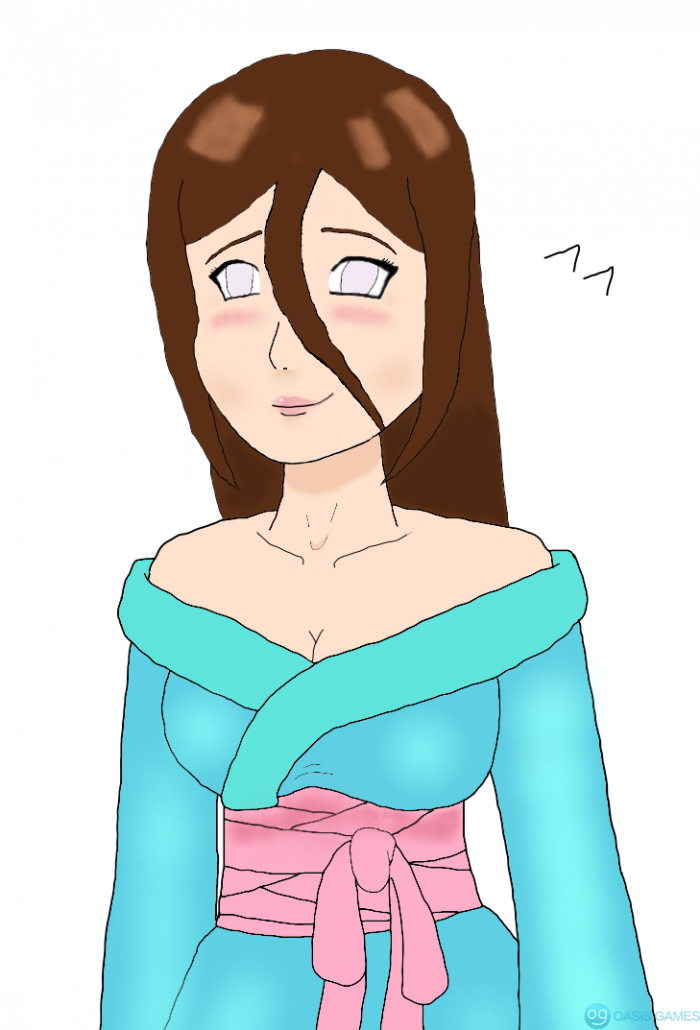 Sly Attack: Attacks line of units with high chance of causing Repulse and lowering its Resistance and Defense by 6% [stackable].

Mad attack: Chases and attacks Repulsed unit, causes Knockdown and has high chance of causing Immobile. Can be triggered twice each round.

Pure beauty: This unit's Ninjutsu and Attack will be increased by 25% for each Male unit in your lineup.

Taunt: Every time this unit triggers a Chase skill its Mystery skill's Cooldown time will be reduced by 1 round. 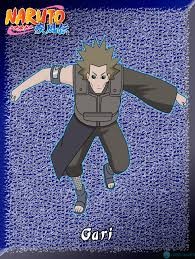 mystery: Explosion land mine :deal damage to four oponent and make them suffer from ignition and 5 combo and knockdown.

standart attack: explosive fist : attack a random row and has high chance to cause repluse and ignition.

chase: chase a repluse cause knockdown and immobile.

passive 1 : every time a unit die increase crit rate by 5% to this unit.

passive 2: every time this unit land critical hit cause immobile. 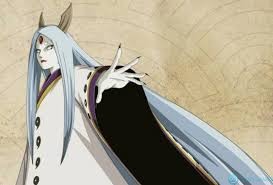 mystery: final trustseeker orbs : cause damage to 12 oponent and cause 10 combo and intteruption and suppress super armor and tag till the end of the round and enter rage mode.

chase: attack low float and cause knockdown and immobile and weakness, this chase ignore defense and ressistant.

passive1: if chakra is higher or equal 50 this unit change barrier and increase combo rate to six path users in your side by 30%. 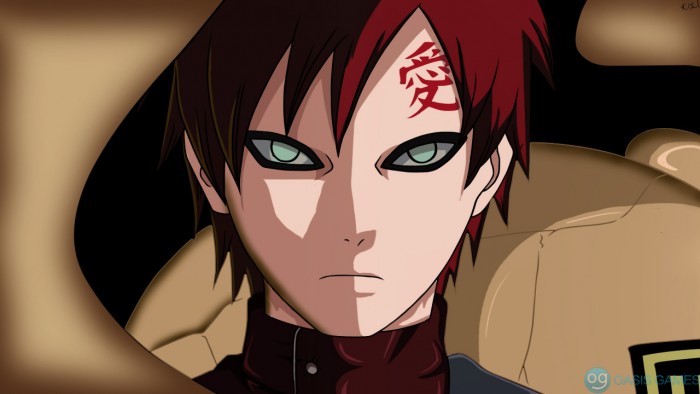 - Attacks 9 Enemies with a Gold imfuse Sand With Wind and Earth Element which cause Knockdown and Apply Gold Dust to the selected enemy.

it goes thru immunity.If you have 80 chakra 1 more random ninja will get himself Applied Gold Dust.

his Ninjutsu by 5% and Resistance by 2%

cooldown by 1 and Gaara will generate 20 to 40 chakra 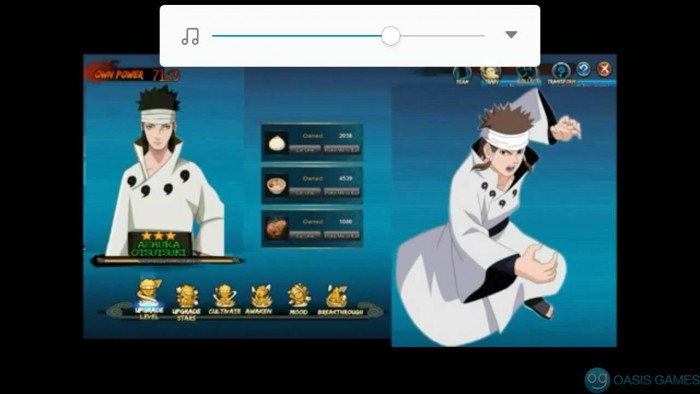 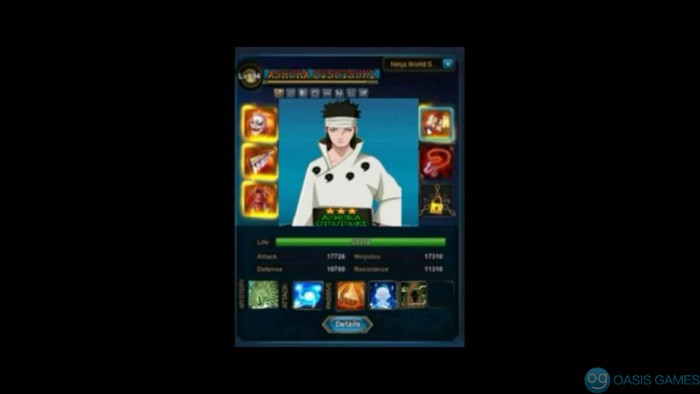 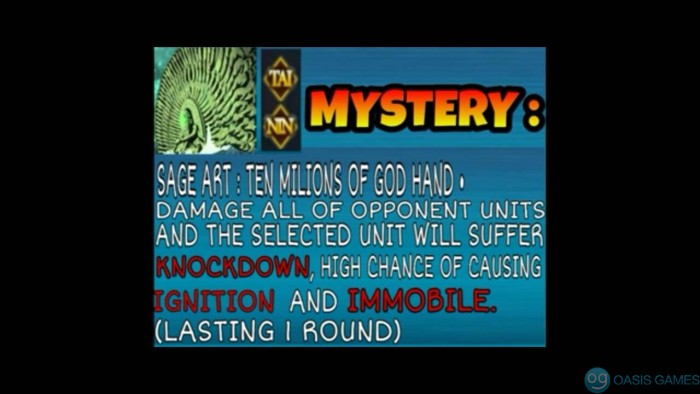 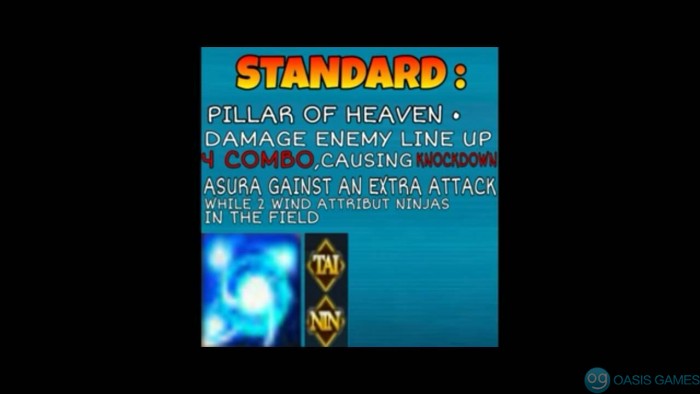 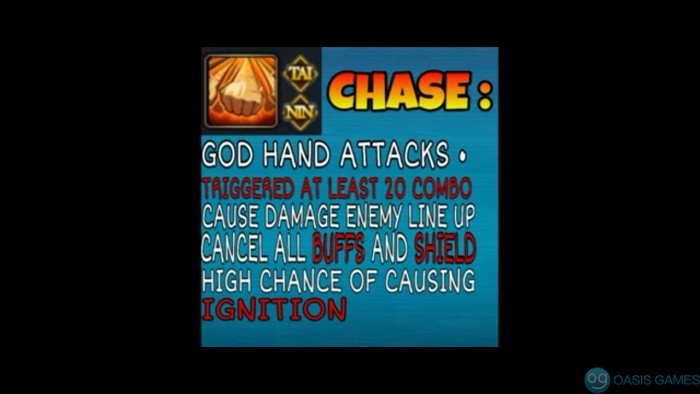 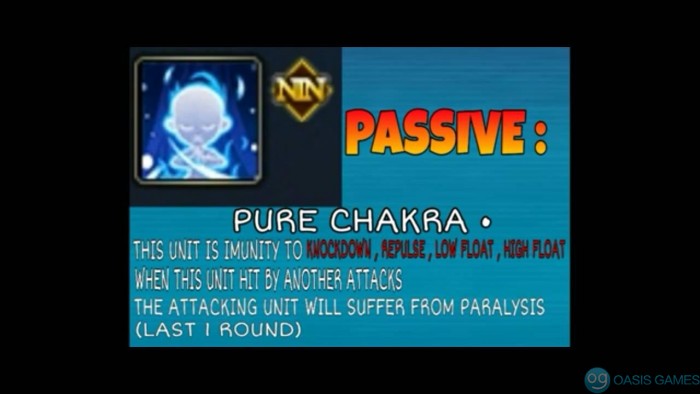 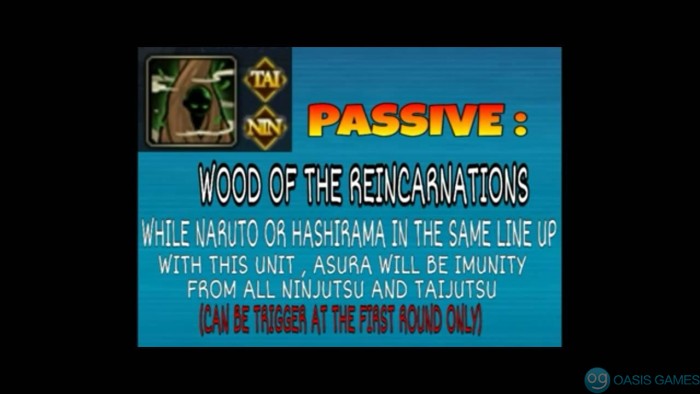 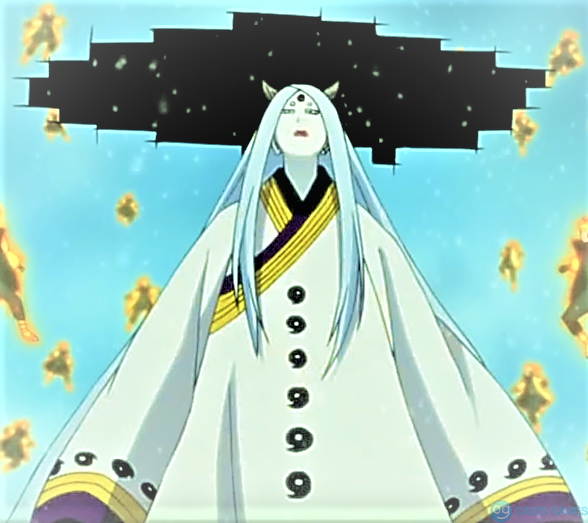 from Immobile. Has a chance of absorbing 20% of the opponents chakra.

Standard: Interdimensional Attack: Attacks the opponents units in the front row causes 5 combo and has a high chance of causing Low Float. Has

a chance of causing Paralysis.

Passive 2: Divine Tree's Power: At the beginning of a battle, launches the Barrier "Divine Tree". Boosts all units in your lineup's Attack and Ninjutsu

by 40%. When the Barrier is active, Kaguya will be immune to pure Ninjutsu damage. 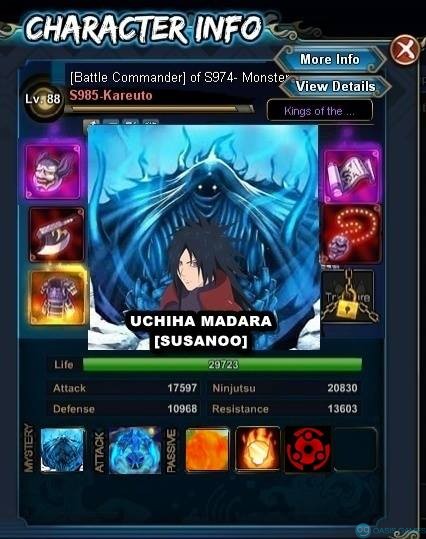 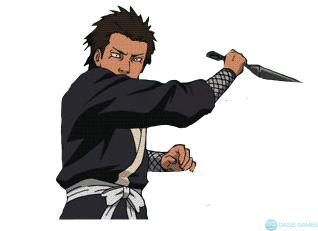 Chase: NIN Fire Dragon Bomb: Triggered with at least 30 Combo cause heavy ninjutsu damage and ignition(least 3 rounds and can be stacked) to 2 random units of the opponent formation.

Passive: NIN Will of Fire: Every time this ninja causes ninjutsu damage increases its Attack by 5% and Ninjutu by 20%

Passive: NIN The Professor: At the beginning of the battle all Konoha Ninja from your lineup will have their Defence and Resistance increased by 60%. Moreover if Hiruzen defeat an opponent with and chase Attack all Konoha ninjas from your team will have their mystery cooldown reduced by one round. 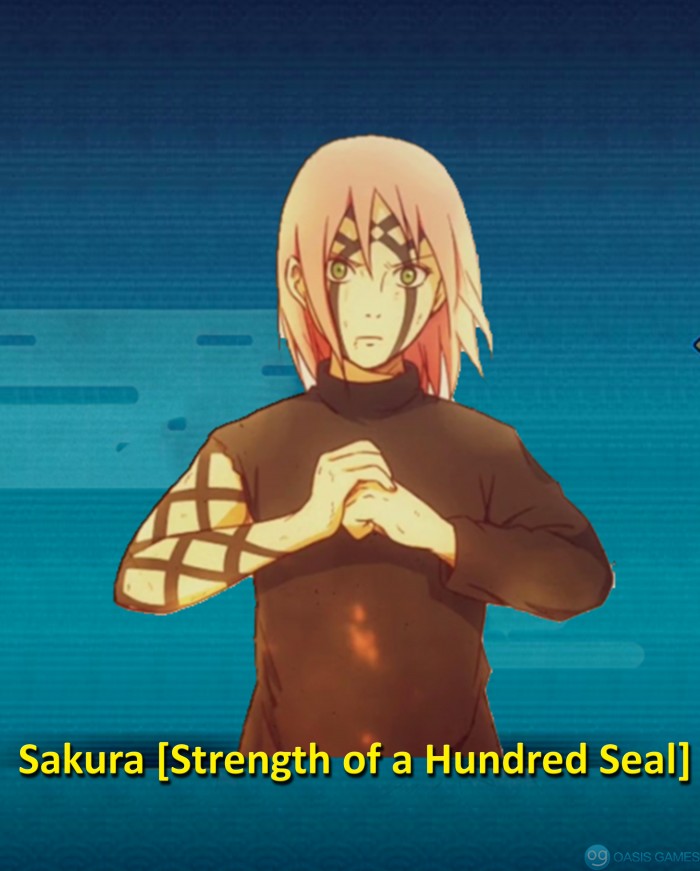 Mystery: Cherry Blossom Impact [Prompt]: Attack and do heavy damage (Tai + Nin) and Interruption, cause High float and remove all buffs and shields to a single target and do splash damage to surrounding units. This skill can’t be dodged and this skill is not subject to the opponent’s Defense skill. If chakra is above 80, this skill has no cooldown.

Standard: Summoning Technique (Slug): Summon 1 or 2 or 3 slug with 40% of Sakura’s max health, these slugs attack random opponent units and do tai+nin damage at the end of round and cause strong poison and steal 20 chakra from opponent. Slugs have a high chance of dodging one mystery or standard every round.

Passive 1(Chase): Chakra Scalpel: Chases and Attacks a High float unit to cause knockdown, suppress immunity to Debuffs and increase target's mystery cooldown to 2 round and steal 20 chakra. This skill never misses.

Passive 2: Katsuyu: Immense Network Healing: Before each action, heals all units in your entire field and disperses 2 Debuffs from each unit. Can be triggered twice each round. If Sakura takes any fatal damage and if any slug in the field remained then the slug with lowest life dies and Sakura regenerate 40% of her life.

Passive 3: Mitotic Regeneration the Hundred Healings: Recovers 5% of Life and adds 5% of Attack and defence, when attacked each time. She is also immune to all Debuffs. 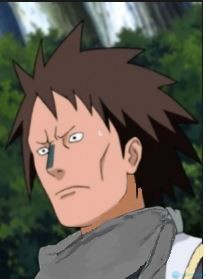 Chase- Spider Web {Tai/Nin} Chase and attacks a high float causes knockdown and immobile. This chase can be triggered 2x. If this unit triggers chase, CD reduced by 1 round 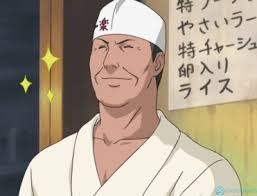 Mystery: Wrath of the Ramen God: Causes water attribute damage to 12 units and causes ignition. Furthermore, this move has a high critical rate. After this is used, go into explosive mode.

Standard: Noodle Spearing: Attacks a line of opponents. Has a chance of causing repulse and acupuncture.

Passive 2: Blessing of the Ramen God: If a unit on your lineup does critical damage they also cause ignite.

Passive 3: Shield of Noodles: This unit is immune to debuffs, low float, high float, knockdown, repulse, and suppression. While in explosive mode, this unit will cause ignite when hit. Furthermore, the attacking unit will take damage equal to 20% of this unit's maximum health