Can we move on to Otsutsuki clan members? lmao 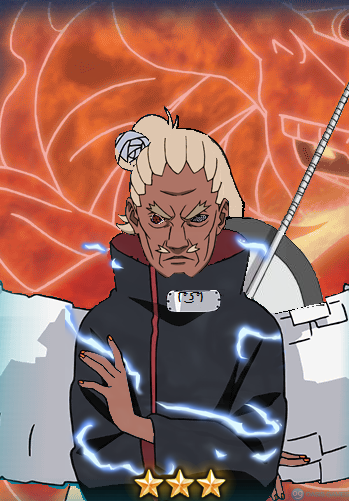 Mystery: Thy sekai shalt kno Pain [PROMPT] - Tai/Nin Fire Earth - Deals damage to 10 units in opponents entire field cause Ignition, selected units has it's immunity to debuffs supressed untill the end of round and suffers from immobile and high float. After using his mystery Sakkai enters Zureb mode untill end of the round. This skill never miss.

Standard attack - Lightning style - Paper bomb - deals damage to 4 random units in opponents entire field these units suffer from paralysis moreover if unit is defeated by this skill this unit get additional standard attack, can be trigerred once per round.

Chase: Universall push: Chase and attack high float cause repulse and tag. Can be triggered 3 times each round. Once per round reduces mystery cooldown by 1

Chase: Susanoo *: Triggered with at least 30 combo cause tag to 3 random units. Sakkai heals himself by 10% of hp for every taged unit this skill hit

Passive 1: Susanoo Yata Mirror - Sakkai is immune to repulse, high float, knockdown and low float and receives 20% less damage from Akatsuki and Jinchuriki units and reflects one debuff each round moreover increase sakkai ninjutsu by 6% when participating in chase attack [ can be triggered 4 times each round]. Mystery chakra usage is lowered by 20 points each time Sakkai use his chase can be triggered 3 times each round, mystery chakra cost can be lowered up to 60 points and goes back to 120 after it is used. Zureb mode: While Zureb mode is active Sakkai reduces his mystery cooldown each time his chase hits taged unit [Can be triggered 2 times per round] and reduces target ninjutsu by 2% each time his chase is triggered.

Passive 2: Power of Bond: Active when in the same line as one of: Konan [Angel of God], Ay [4th Raikage], Madara Uchiha [Founder of Konoha] or Itachi Uchiha [Susanoo]: Each time one of those units use it's mystery skill reduces mystery skill cooldown of other ninja by 1 and increase both ninjas defense and resistance is increased by 10%. Can be triggered 1 time each round. This skill doesn't work when there is more than 1 listed ninja. [Team passive, not field one] 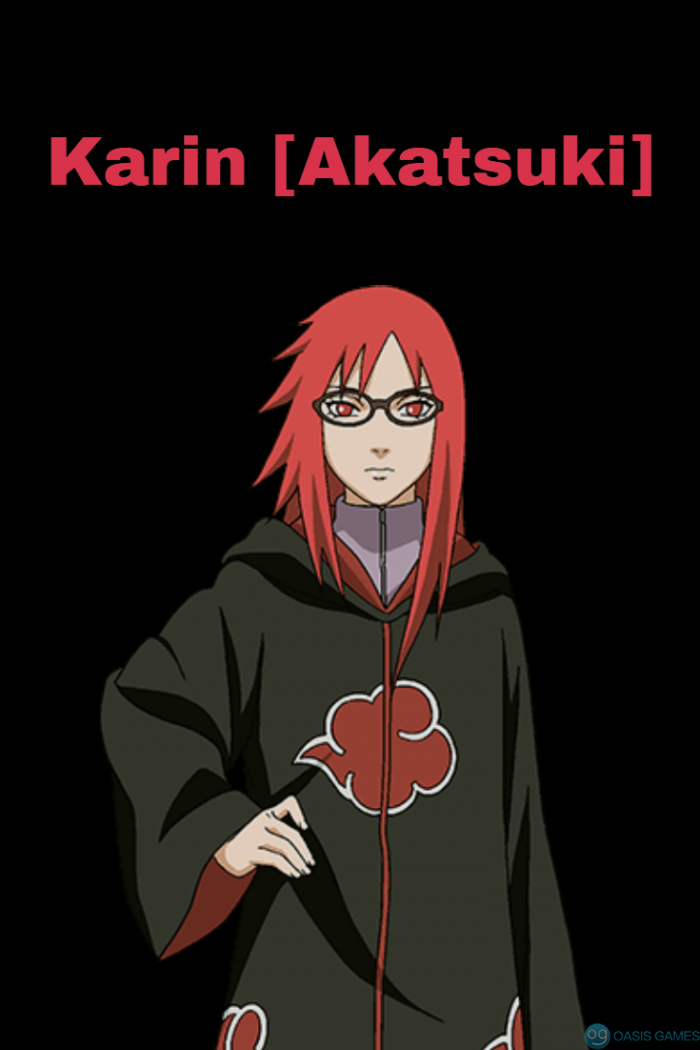 Mystery:Healing Bite: Select *ly unit, this heals that unit by 60% and removes all debuffs (dream and weaken included) and gives 60 charka.

Passive 2: Akatsuki Alert: Increases all akatsuki ninjas defense and resistance by 30% for 5 rounds. 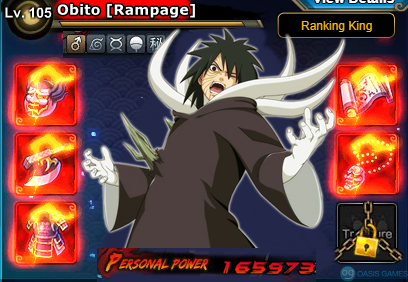 Mystery: (PROMPT) Wood Style: Great Tree Spear: Causes damage up to 12 enemy units, Suppresion of Super Armor and causing Low Float to a selected unit, all enemies hit will suffer Bleeding until the end of the round Ninjas under the Bleeding status suffer damage every turn until to death. [taijutsu/ninjutsu]

Standart: Super strength: Attacks the front enemy causing 3 combo, Low Float and suppressing Super Armor until the end of the round. [taijutsu]

Passive 2: Rage: If Obito kills an enemy with his mystery or standard, gets an extra standard attack, for every dead ninja on your side of the field, increase you Ninjutsu and Attack in 30%, causes 75% more damage on hidden mist ninjas. [ninjutsu]

Bleeding: Cause the same damage Ignition every round.

Mystery: Execution by Kiss (prompt): Deals certain Ninjutsu damage to the selected unit, causes Chaos for 2 rounds, stealing 50% of the target’s chakra, furthermore increases Fūka’s Ninjutsu and Resistance by 15% permanently. Upon which, Fūka gains Explosive mode for 1 round.

Passive 2: Earth Release: Mud Spore: Before the first action of each round Fūka removes the actual Barrier by summoning a river of mud which causes Slowness to 2 random units of the opponent’s lineup.

Passive 2 (Explosive mode): Water Release: Stormy Blockblade: Before the first action of each round Fūka removes the actual Barrier by summoning a massive amount of water which causes Weaken to 2 random units of the opponent’s lineup. 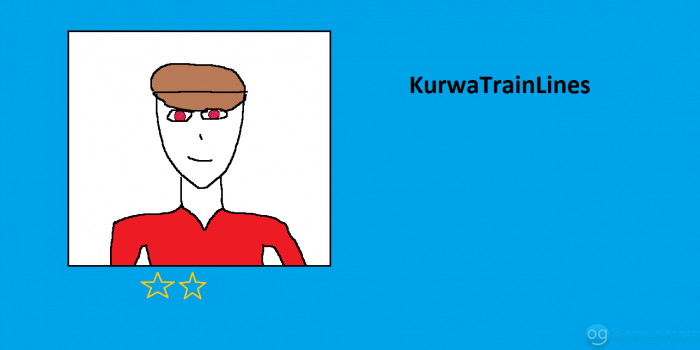 Mystery [NON PROMPT]: Charming boy: Supress immunity to debuffs and cause chaos to selected target, if the target is male cause chaos to additional random unit.

Chase: Charming kiss: Chase and attack immobile cause chaos. If target is male reduce cooldown of mystery by 1

Chase: We are all equal: Triggered with 20 combo cause paralysis and tag to two random units 2 combo and reduce mystery cooldown by 1. Train guy suffers from tag and paralysis

PS. His look is not important but his eyes are very important 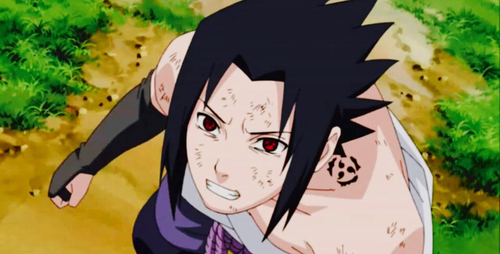 Summons Manda to protect up to 9 friendly units, during this time all units are not affected by damage or debuffs at all. Lasts 1 round

Causes KNOCKDOWN and PARALYSIS to one unit. Can be done 2x a round

P1: Trapped In My Genjutsu

Immune to debuffs, when Sasuke is hit you gain 10 chakra

Available at 4 stars: When hit the attacker has a 65% chance to receive Suppression of Super Armour

How do you find UID? 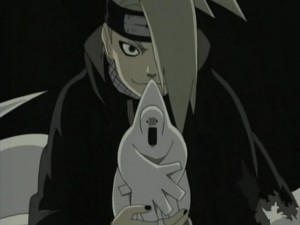 Passive 3:C0:Resurrects immediately upon death. The mystery of this unit will become C0 skill and will lose all other skills.C0 will cause fatal damage to 2 units and oneself. This unit is killed by C0 and will not resurrect. 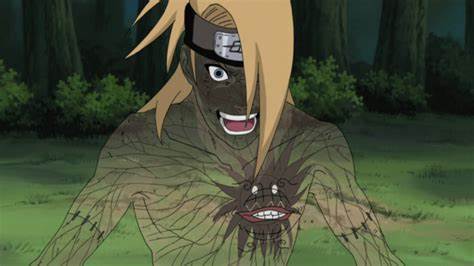 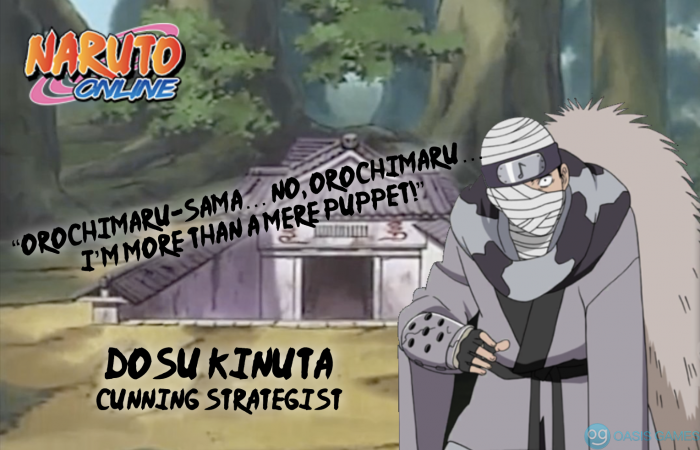 Available as a 2* Ninja 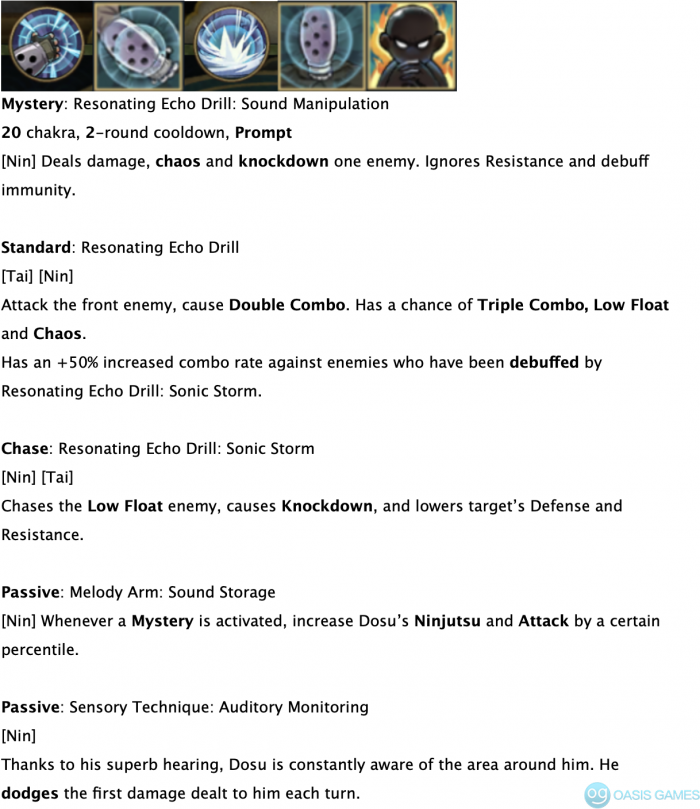 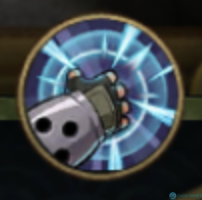 Has a +50% increased combo rate to enemies who have been debuffed by Resonating Echo Drill: Sonic Storm. 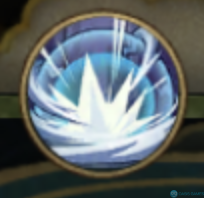 [Nin] Whenever a Mystery is activated, increase Dosu's Ninjutsu and Attack by a certain percentile.

[Nin] Thank to his superb hearing, Dosu is constantly aware of the area around him and can easily detect any threats. Dosu dodges the first Mystery or Standard that hits him each turn.

Dosu would play out as an overall debuffer/support ninja than anything. He would have decent HP, mediocre Attack, average Defense, average Ninjutsu and high Resistance. He would dish out lots of debuffs, at the cost of having a lower damage output until people started to use lots of Mysteries in the middle of the fight.

After a few rounds pass, a few Mysteries are used, and a few enemies' defense and resistance are lowered, Dosu really begins to shine. Even with the debuffs and his own buffs he won't become a high tier nuker in any way, but he'll deal much more damage and be able to support his allies better.

So that's that. I poured my heart into this one. Let me know if I need to change anything. I really don't know the me

OK here's 2 but they go together

Causes Heavy damage to all enemy units and BLINDNESS to up to 9. Also adds 2r to up to 3 units at random

Causes REPULSE and IMMOBILE to one unit, while adding 1r to their cooldown time

Chases and attacks a LOW FLOATED unit causes KNOCKDOWN, IMMOBILE, 10 COMBO, Critical and has a low chance of CHAOS

Causes Paralysis to up to 9 units. Causes Repulse and Ignition to the selected unit and has a chance of Chaos.

Triggered with 20 Combo causes Chaos to a random unit

desc: does heavy nin damage to a selected opponants character while causing chaos to the selected unit.

desc: causes ignition to 2 of the opponants characters

desc: gives 20 chakra to your team before each round

desc: does tai damage to a random enemy unit

Price: Free in mt myoboku trial or as a monthly ninja

Mystery skill uses 20 chakra and has a 1 round cooldown time at the beginning of the battle. 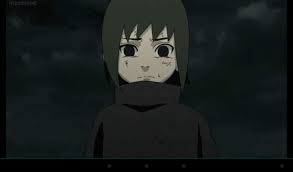 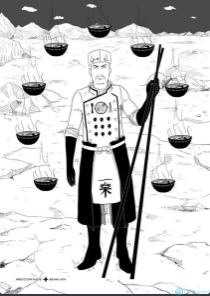 Passive 1: [Gourmet Ramen] Before each action, Teuchi will remove all debuffs off of a random Konoha ninja in your field and give him/her an extra standard attack.

Passive 2: [Power of the Nine Bowls] Every time Teuchi is attacked one of his bowls will absorb the damage for him and then disappear when all nine bowls are gone he will go Beserk and deal 60% more damage to all ninjas who aren't from Konoha.

Passive 3: [Feeding My Customers] Before a fight begins Teuchi feeds all his allies with ramen giving them an increase in resistance and attack if Naruto is among them there is a very high chance to feed him with full buffs seeing as Naruto is his favorite customer. 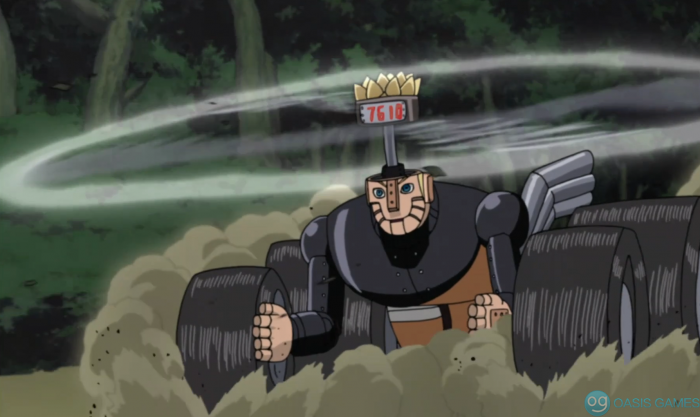 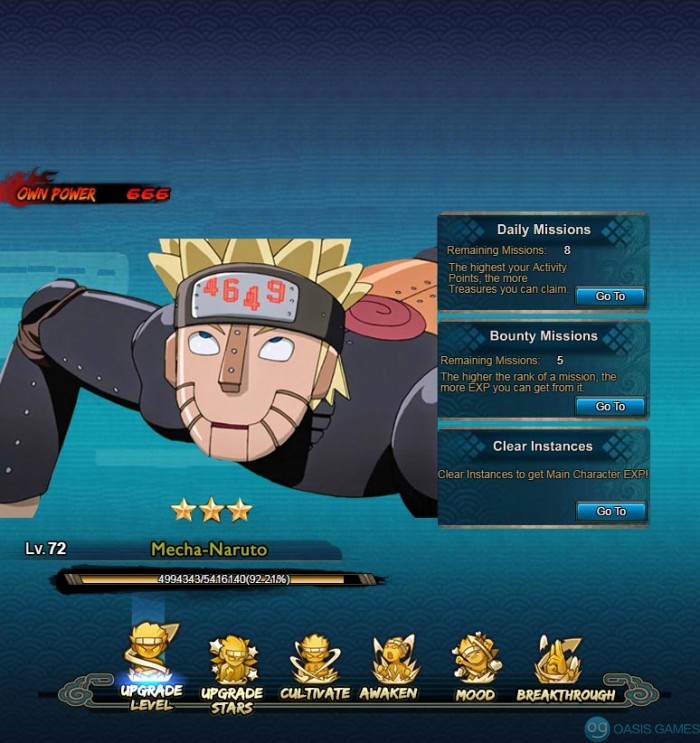 Mystery: Mecha-Naruto Bijjudama - Faeru - Deals ninjutsu and taijutsu damage to up to 7 opponents units, inflicting Ignition. Selected target suffers from Repulse. Spends all available chakra, increasing damage by 15% for every 10 points of chakra spent. If target is a Giant Beast, damage is further increased by 80%. Mecha-Naruto also loses 20% of his current HP after using his Mystery. 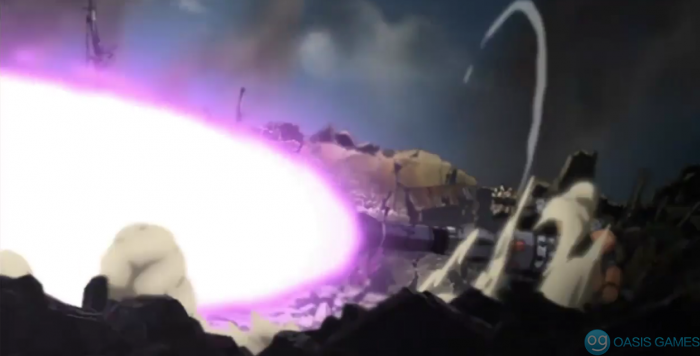 Standard: Mecha-Naruto Vehicle mode - Mecha-Naruto menacingly drives over the opponents unit, which is suffering from the highest number of Debuffs, with a certain chance to inflict Paralysis and Knockdown.

Passive 1: Kurama-hunter - Chase and attacks Low Float, causes Knockdown, can absorb up to 20 chakra, increases Mecha-Naruto ninjutsu and resistance by 10%, can be triggered twice each turn. 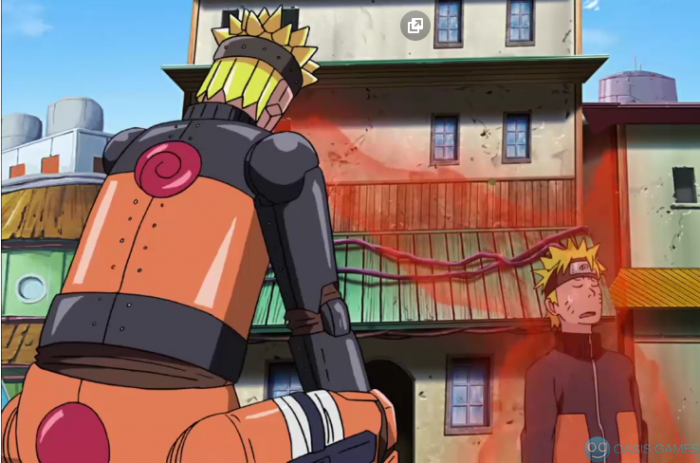 Passive 2: Flightu-Modo Bomber - Triggered with at least 20 hits, 3 of the opponents units suffer slight damage with the chance of Ignition.

Passive 3: Jinchuuriki 7610 - Mecha-Naruto is immune to all Debuffs. Moreover, each time a Debuff should have been applied to Mecha-Naruto, Mecha-Naruto gains 10 chakra and heals for 4% of his maximum health points. 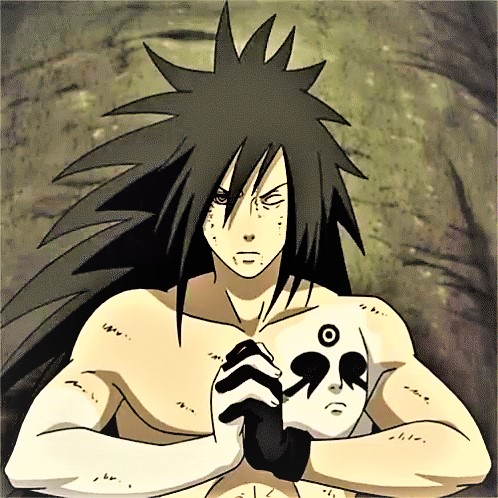 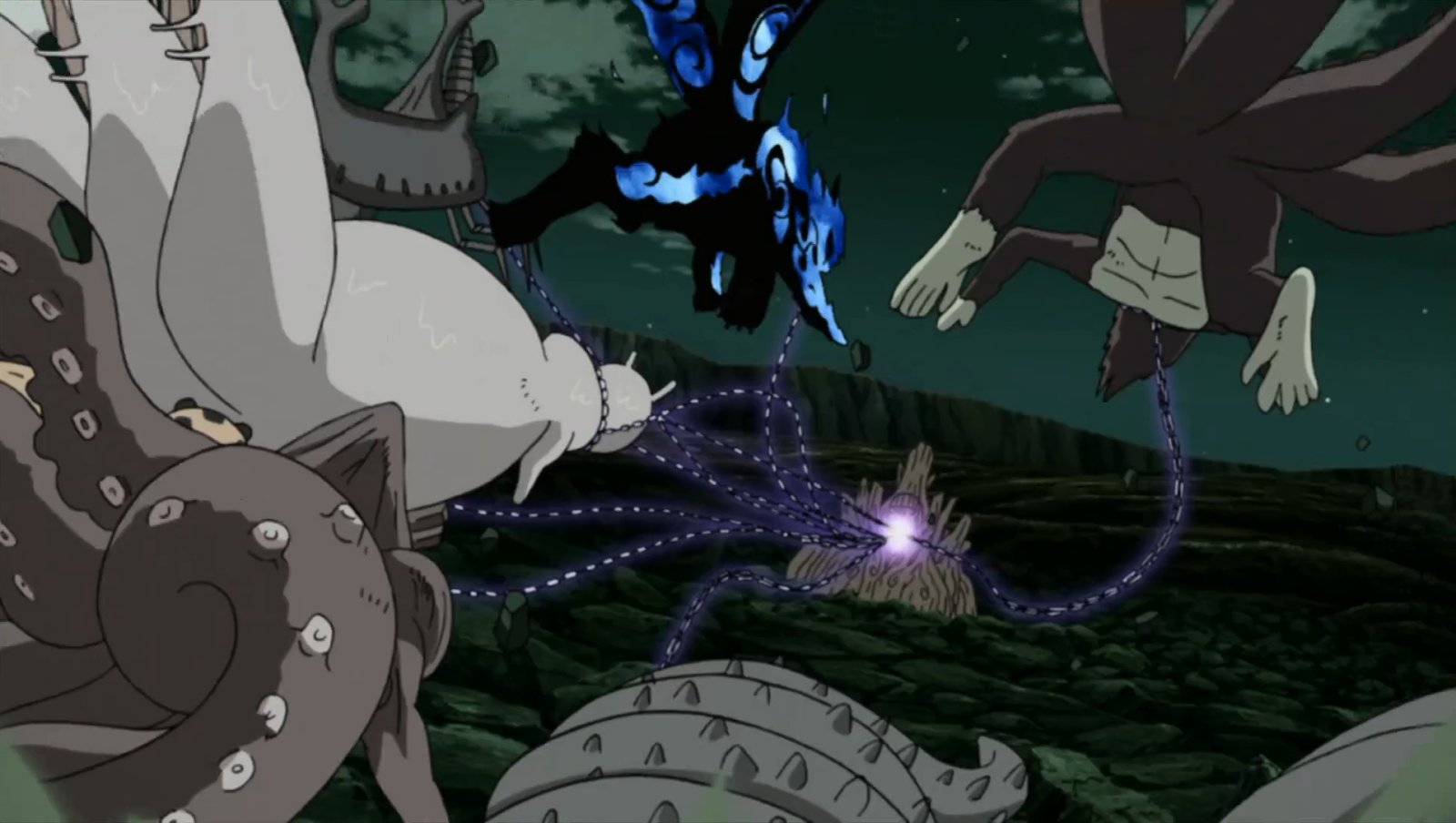 Gedo Statue Swallow Jutsu – Adamantine Swallow Gedo Chains [Prompt]: Causes damage and Paralysis to up to 9 units of the opponent’s team and Suppresses All Immunity to Debuffs until the end of the round (At this time, if the opponent recovers its Immunity, it will cancel all of its Debuffs). Causes Repulse to a selected opponent’s unit and extra damage any Jinchuriki unite. 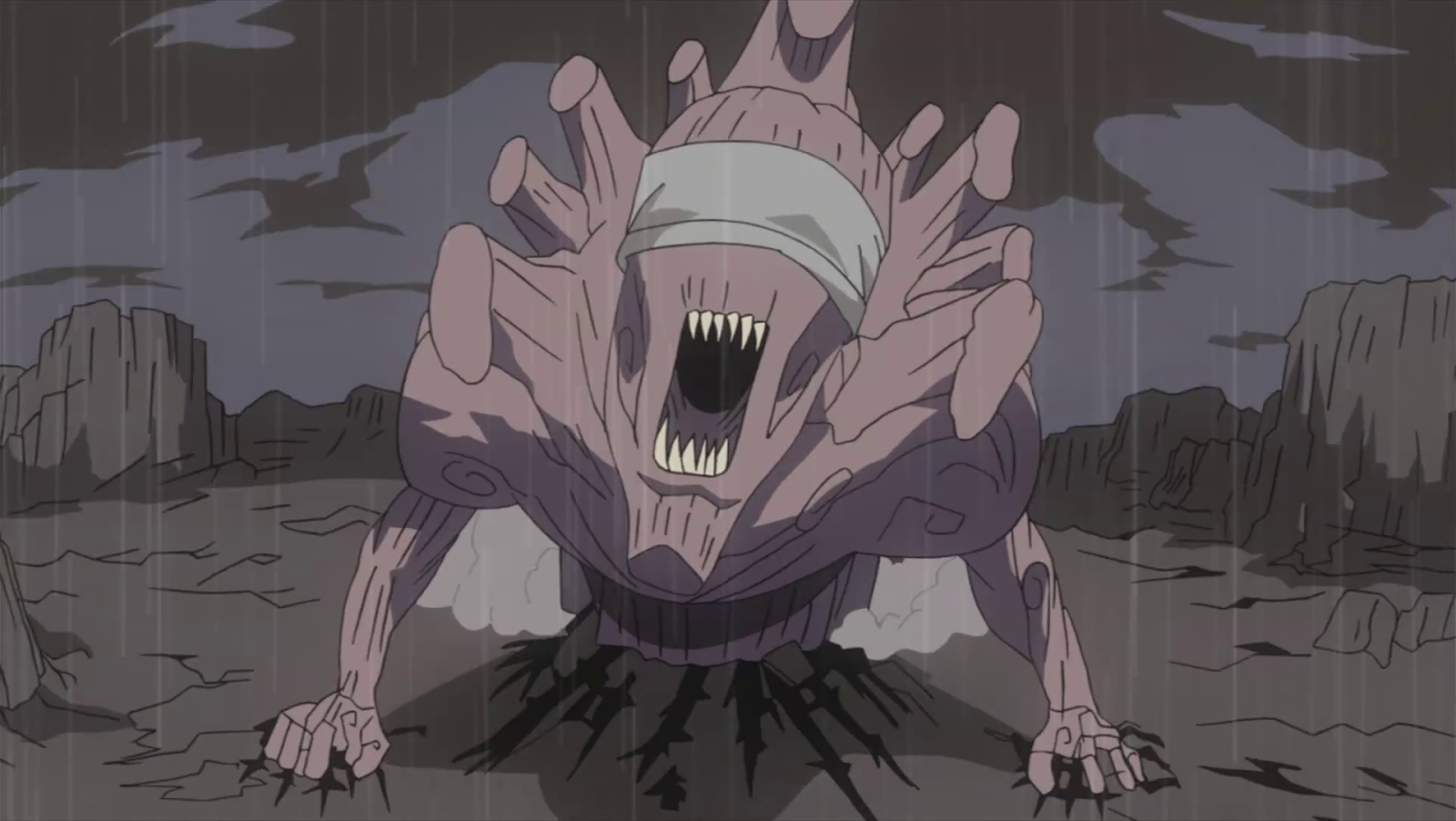 Gedo Statue Ninjutsu Remove: Causes Ninjutsu damage to random opponent’s unit and absorb at most 60 Chakra points and Chaos and Knockdown and affected any jinchuriki units.

Chakra Black Receivers: Chases and Attacks a Knocked Down unit, causes Acupuncture and Knockdown, causes High Float and Ignition which lasts for 5 rounds. This skill is always a Critical Hit.

Sage Art - Triggered with at least 40 combo, causes Earth, water, fire attribute damage to 9 of the opponent also affected any Jinchuriki units and suffer from immobile.

Ninjutsu - Tailed Beast Chakra – Wars: Before each action of a round, recovers Life ba

Note: I'm not good at making skills. Just give my guess what should be his skill. I want to see this Uchiha Madara (Rinnegan).

you have my vote 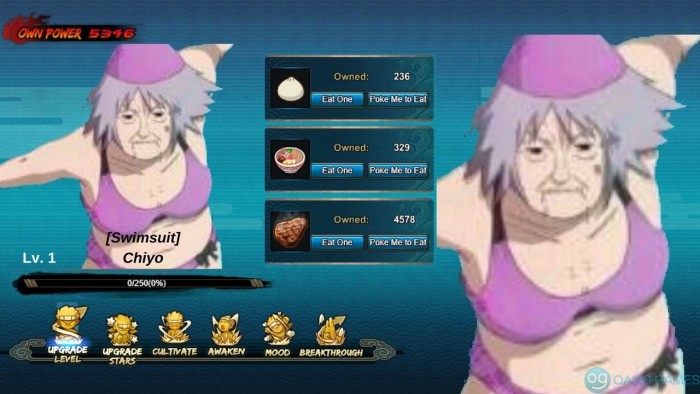 Mystery: God of kunoichi.Three puppets(of her ten puppets) will be used to attack all units in the enemy lineup.Can't be dodged or interrupted.

Standard: Summon 3 puppets to the field.Also known as pechy pechy beater ,causes low float and knockdown. A unit defeated by this skill can't be revived.

Passive 1: Amazonian rain .Cause bleeding and blindness to all male units for 10 rounds.Units affected by bleeding will takes 50% more damage.

Passive 2: Breath of death. Steals 20 chakra for each male unit in the enemy field.

Passive 3:Swimsuits unite!Increase resistance,attack and ninjutsu for all swimsuit units by 40%

Player info: not interested in the rewards so no.