So not so long ago, I got bored with the usual Earth main+6PN lineup, and decided to spend some time as Fire. I immediately found myself having to make a third lineup for matsuri (in addition to the Edo Hiruzen and 6PN lineups). After looking through my ninjas, I went and gone with a troll team and was pleasantly surprised how well they work together. The team utilize chakras stealing, debuffs, mirror, and super armor+Chiriku's resistance buff. And it's been really fun to fight vs all kind of opponents and see how well a random troll team I threw together worked against a wide range of lineups. Surprisingly and pleasantly enough, this lineup can withstand and win against a variety of 6PN lineups (as long as the opponent doesn't have like a crap ton more BP over me). 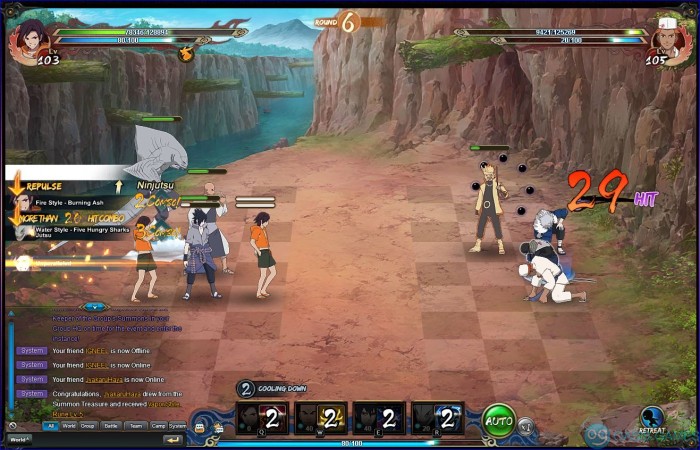 Just posting this here because this troll team has served me surprisingly well, and someone else may yet find a good use for it.

Where is the troll team?

Chiriku? He is more than decent as position1.

Sasuke ? definitly not a troll ninja

Play with a "no overused me

i use 4-star chiriku all the time for matsuri since i got him, i don't think it's "troll" team at all , why you think using him is a troll ??? because he is Free ninja ???

It's a troll team in this sense: A serious team utilize ninjas that are interconnected in certain ways, often buffs one another. It is setup in a way that gets the best dmg and cc output, and can nullify opponents attacks as well as protect itself. Here, all ninjas are not at their usual optimal position (explanation below), They are all over the place, sure Chiriku provide a buff, but that's pretty much it. The dmg is meh, the tankiness of the team is mediocre, and it's ridiculously easy to counter it, yet it still won against teams after teams that are suppose to counter it, so that's why I called it a troll team.

As for positioning of the ninjas:

Chiriku is not often used as position 1, he lacks the tankiness and his dmg is mediocre compare to other position 1. His cd is also super long, it can be reduced if atk, but if he used mystery in the round and dodges atks, he's not much use -> unreliable as position 1. More often than not he can't even use mystery round 2, which mean if opponent even have half a brain and knows how these ninjas work, this team would be dead by r3 easily. Thus why people usually have Chiriku in any position but position 1.

Sasuke is great, but he's used more in position 1 than 2. He's usually only position 2 when position 1 is someone better (like 6PN for example), which as explained above, Chiriku isn't.

Kisame simply doesn't contribute much to the lineup, aside from stealing chakras, which can easily be countered if he's cc/paralyzed, and having him as position 3 means this would very likely happens. -> unreliable support.

So basically I had a non-tanky tank with a long ass cd, a benched dmg dealer, and 2 supports that can easily be cc-ed if my opponent knows what to do, so basicailly, it's unreliable and easily countered if any of the ninja is under a hard cc, the chase falls apart, and the team falls apart. The only thing this team has is super armor, res buff, and consist of events ninjas (and as we all know, a team consist of all rare ninjas can still be horrible and ridiculous).

It's also a troll team in the sense that Konan Taisho (position 1) - Edo Deidara - Jinpachi - Wind main is a troll team. I'd never use it when winning or losing actually matters, like for example, ranked arena, space time, or even Zenith if they ever all appear in there someday.

Also, trolling can sometimes be defined as causing frustration using ridiculousness. So, there's that.

1. what do you mean chiriku is not for pos1, his mystery is saying he need to get HIT by other to counter and reset , his counter is pure dmg from HP, and his passive increase DEF & RES. where does that doesnt scream TANK for you ??, and the only position to get hit easily is pos 1. he work much better if you have a higher ini in battle.
2. you can literally put sasuke in anywhere, someone can hit him with mystery or chase , chaos them to cancel their chase and get some chakra to do his mystery, i dont understand where people get the idea , "OhH sASuKe iS pOS 1 aND 2 onLY".
3. kisame already done his job after you switch the barrier, its not optimal to be in pos 3 , but sometime it work when there is no one to interrupt him. and his HP is restored everytime his shark die, and you say your team not TANKie ???
4. yeah sure , his mystery doesnt do anything, its not like removing buff and giving immunity is a support.

all the ninja is functioning as they should , there is no "troll" here.

Chiriku is more of a front line PoS 2 unit (if that), he makes things tankier, but it doesn't mean he is a tank or the units he buffs.

The only reason you run Chiriku is for his passive (the boost to def/resist) and his chase to CC and remove buffs. His mystery's damage is meh, but can be used to bait dodges (if you really wanted to I guess), his other damage is heavily dependent on him evading at 4* when using his mystery, which btw, won't reduce his CD on his mystery. So in some situations, 3* > 4*

Next, Rinnegan Sasuke isn't a tank so even with the boost to def/resist, it isn't going to make him last longer, he is still squishy and can die easily.

There is a reason why people run him in p1 or p2, that is so he can chaos anyone who attacks him in round 1 to be carried over to next round, that and absorb chakra (if any).

Kisame's Sharks don't do anything if they die in round 1 where Kisame is at full HP. The only thing keeping him alive is his super armor since 90% of the time you're using him in round 1. You may have a shark left over, but its going to die in round 2 from a mystery which will still not let him be as tanky as you make him out to be. Next, Chiriku can't buff Kisame with his passive, so he'd have to rely on sharks.

Troll teams are designed to "trigger" people. It has nothing to do with their functionality.

Pretty much this. This team would not even work outside matsuri where pos1 is stacked af and can wipe everyone out r1. It wouldn't even work in arena with the health and other stats reduced. So it will trigger a lot of people who are used to that elsewhere and then run in to this in matsuri.

the thing is... when you have people that runs only naruto 6paths everything else is considerate "troll team" ...